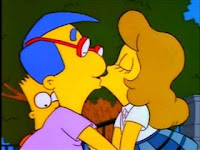 Or the One Where
Milhouse, um, falls in love...

The Setup
After stealing Homer's change jar in dramatic fashion, a Magic 8 ball foretells that Bart and Milhouse's friendship will soon come to an end, bewildering them until Milhouse becomes smitten with new girl Samantha Stankey.

Notable Notes
The opening sequence of this episode obviously parodies the opening of Raiders of the Lost Ark (with Bart as Indy). The producers contacted Steven Spielberg to clear usage of John Williams' "Raiders March" for the sequence.

Favorite Quotes
Bart: How would I go about creating a half-man, half-monkey-type creature
Ms. Krabappel: I'm sorry, that would be playing God.
Bart: God schmod! I want my monkey-man!

Marge: Homer, has the weight loss tape reduced your appetite?
Homer: Ah, lamentably no. My gastronomic rapacity knows no satieties

Milhouse: How could this happen? We started out like Romeo and Juliet, but it ended up in tragedy. 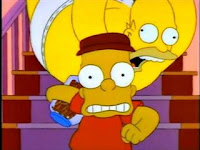 Teebore's Take
An episode that illustrates the groove Simpsons is settling into at this point. There's nothing terribly remarkable about this episode; no significant new characters are introduced, and both plots feature fairly routine sitcom material. But the episode makes the most of its two plots with some great gags (including one of the show's best film references) and strong character work. Though there's plenty to like in the A plot (such as Bart's decidedly juvenile approach to the opposite sex: "we're living in the age of cooties"), the subplot, in which Homer attempts to lose weight via subliminal message tapes only to be unknowingly sent vocabulary builder tapes, elicits some of the biggest laughs as Homer's vocabulary spins out of control. However, a clear highlight of the episode is the sex ed film (Fuzzy Bunny's Guide to You Know What) Ms. Krabappel shows the class (narrated by Troy McClure, of course), which manages to lampoon the same frank-yet-still-euphemistic tone of the sex ed films we all had to sit through at one time or another, to hilarious results.

While not a noteworthy episode in and of itself, a strong outing nonetheless that shows how The Simpsons at this point can elevate even relatively straightforward material to new heights. 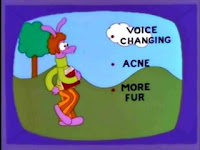