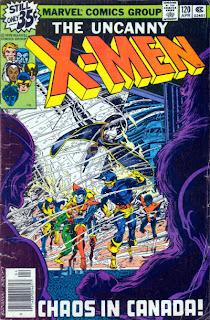 In a Nutshell
The first appearance of Alpha Flight

Plot
The Prime Minister of Canada and Vindicator (nee Weapon Alpha) watch footage of the X-Men battling the Mandroids in Japan. The Prime Minister insists that Vindicator capture Wolverine, and Vindicator calls on his teammates in Alpha Flight to help him. In Japan, the X-Men say goodbye to Sunfire and board a private plan with Misty Knight and Colleen Wing. On their way back to New York the plane encounters a storm that seems to have an intelligence behind it, guiding them to Canada, where they're forced to land. On the runway, they are confronted by Vindicator, who demands Wolverine's surrender. Thankfully, Alpha Flight strongman Sasquatch's over-eagerness destroys the plane, giving the X-Men an avenue of escape under a cover provided by Storm.

The X-Men split up, agreeing to rendezvous later at the Calgary Tower. Nightcrawler teleports into the city, but is hit with a blinding flash and knocked unconscious by Alpha Flight members Northstar and Aurora. Meanwhile, Banshee, Storm and Colleen stop at the mall to help disguise Storm. Vindicator tracks them there, and Banshee instinctively tries to use his power, but his injured throat causes him to collapse in pain. Storm fights off Vindicator, and she, Banshee and Colleen meet up with Cyclops, Colossus and Misty. As Wolverine makes his way through the city, he is attacked and taken captive by Sasquatch. With Nightcrawler and Wolverine presumed captured, Cyclops vows that though the X-Men didn't start this fight, they intend to finish it!

Firsts and Other Notables
The Canadian super team Alpha Flight makes it first appearance, including members Northstar, Shaman, Snowbird, Sasquatch and Aurora, though they appear mainly in their civilian identities or in the shadows, their full reveal held for next issue. 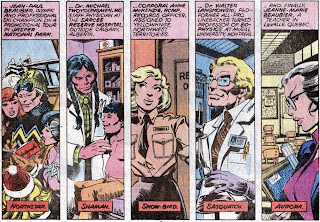 Weapon Alpha, who attempted to retrieve Wolverine for Canada in issue #109, returns as Alpha Flight's leader. He has been renamed by Claremont "Vindicator" (a name which Canadian John Byrne never liked, famously remarking, "what does Canada have to vindicate?").

Wolverine tells Mariko his name is Logan, making her the first character in the book to learn his real name (none of the other X-Men were around when the leprechaun referred to him as such in issue #103). 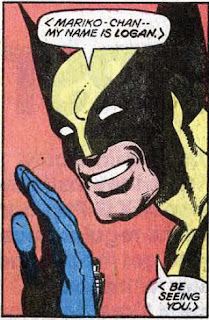 The Statement of Ownership in this issue declares the average number of issues sold in the preceding twelve months to be 115, 260, with the single issue nearest to the filing date selling  104,915 copies.

A Work in Progress
The X-Men are flying home aboard a plane provided by Jeryn Hogarth, Iron Fist's lawyer and Misty Knight and Colleen Wing's boss. Later, Cyclops says Colleen and Misty are attempting to contact him to get the X-Men some legal help.

Another craft in which the X-Men are traveling is destroyed, as Sasquatch inadvertently tosses their airplane. 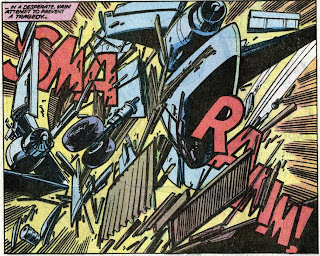 Nightcrawler is discovering the limits of his jumps, as he was able to go seven miles in three jumps. 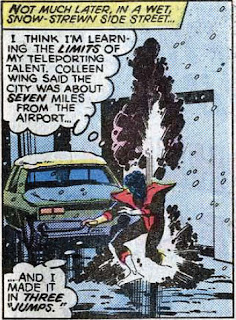 Banshee notes he shouldn't be smoking, and considers calling it quits as a superhero. 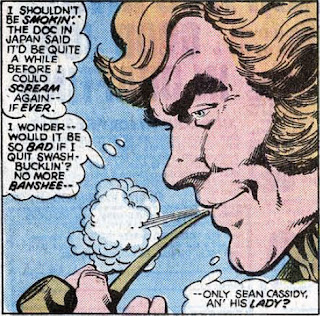 Storm points that's she never feels cold (thanks to her power).

That 70s Comic
Though not identified as such in the comic, the Prime Minister of Canada to whom Vindicator reports resembles Pierre Trudeau, who was the actual Prime Minister at the time this issue was first published (yes, I had to look that up. I'm American, and thus largely ignorant of Canadian politics).

Dave Cockrum, Bonnie Wilford and Terry Austin appear as the X-Men leave the airport (check out what Terry Austin is reading - click to embiggen). 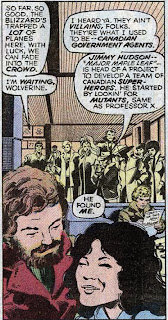 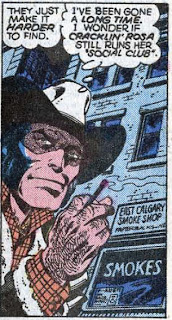 Banshee is smoking inside the mall, which would probably stick out as anachronistic to younger readers reading this issue for the first time today.

Artistic Achievements
Are any of our Canadian readers from Calgary? Did native Canadian John Byrne do a good job of rendering the city (note: it's snowing because of the storm which grounded the X-Men's plane, not because Americans think it snows perpetually in Canada. Even though we do)? 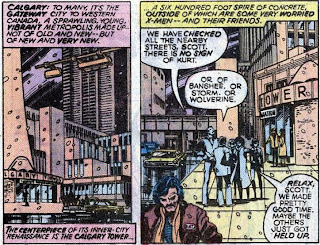 Byrne does a nice job of depicting Banshee's anguish when he instinctively tries to use his sonic scream against Vindicator (also, Banshee uses the word "spaleen", which is pretty awesome...). 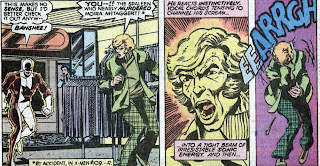 Young Love
Scott and Colleen grow closer during the flight from Japan.

Wolverine finds himself falling for Mariko.

John Byrne on the creation of Alpha Flight
"Several members of what became Alpha Flight date back to my fan days. Guardian is chief among them, being created when I was in my early 20s as the figurehead of a whole line of "Canadian comics" I was hoping to produce. Snowbird, in very different form, was born around the same time. Shaman, originally called Chinook (he had only weather-controlling powers) came next.

...When I was assigned the gig of penciling UNCANNY X-MEN, Chris Claremont mentioned that Dave Cockrum had an idea that the Canadian government probably would not be too thrilled to see their multi-million dollar investment -- Wolverine -- head south as had so many other Canadian resources. Surely, he suggested, Ottawa would send somebody, perhaps even a team, to get him back. This sounded like a great idea, to me, and, of course, I had just the characters to do it. We decided to start with just one, tho[sic], the leader of the group. Since Marvel at that time was publishing GUARDIANS OF THE GALAXY the Powers that Were nixed the name Guardian, and since my backup, the Canadian Shield, was equally problematic in the Marvel Universe, he was without a name for a while. Chris took to calling him "Major Mapleleaf", and Roger Stern said we'd better come up with a name before that one stuck. Chris then tacked on "Vindicator", which absolutely did not work for me. What does Canada need to "vindicate"? I began pushing for the restoration of Guardian, and eventually pushed that thru [sic].

Before that happened, tho[sic], we had our "sequel" to do, with that group of Canadians coming down to reclaim Wolverine. I dropped in the renamed (and power enhanced) Shaman and a redesigned Snowbird, and came up with Northstar and Aurora (super speed to counter Nightcrawler's teleportation), and Sasquatch (to balance Colossus) and off we went. In the process I came up with real names and some backstory for each."

Teebore's Take
With this issue, John Byrne debuts one of the lasting contributions to the Marvel Universe to come out of the Claremont/Byrne run in the form of Alpha Flight, Canada's preeminent superhero team (though Claremont is credited as author and co-plotter of this issue, Alpha Flight is considered the creation Byrne, and he retains sole credit as their creator). Alpha Flight will go on to headline its own book for over a decade and retain a presence within the Marvel Universe to this day, though the team will always maintain a connection with the book which created it (such as future superstar X-Men artist Jim Lee, who will break into the industry on Alpha Flight, or Alpha Flight members Northstar and Madison Jeffries, who are currently members of the X-Men).

The issue itself is surprisingly suspenseful, considering the X-Men's foes are, for all intents and purposes, fellow superheroes and not maniacal villains out to destroy them. Throughout the issue the X-Men are on the defensive, running from shadowy figures, the full extent of their foes' powers unknown to them. After the inoffensive but rather standard Japan story, its nice to see Claremont and Byrne firing on all cylinders again.

Next Time
It's the X-Men vs. Alpha Flight in Canadian comic book conflict!
Newer Post Older Post Home
Posted by Austin Gorton at 8:00 AM