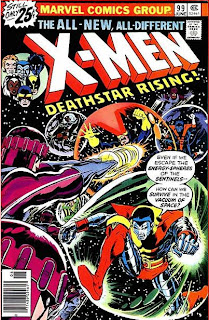 In a Nutshell
The X-Men go into space to rescue their teammates, and come face to face with the original X-Men.

Plot
In outer space, Banshee, Wolverine and Jean Grey are recaptured by Sentinels and brought back aboard Lang's orbital platform. Down on Earth, their teammates mount a rescue mission with the help of Dr. Corbeau. Serving as the flight crew of the Starcore space shuttle Eagle One, their identities withheld from the media, they blast off into space. Meanwhile, in Ireland, Banshee's lawyer sends him an urgent message but is attacked by a shadowy figure who calls himself Black Tom. As the shuttle approaches Lang's platform, Corbeau requests permission to board, but is rebuffed by Lang. When the platform's mutant detectors sense mutants on the shuttle, Lang sends Sentinels to attack it.

The Sentinels breach the shuttle, causing explosive decompression which sucks Storm out into space.  Corbeau rams the shuttle into the platform as Storm manages to evade capture. She joins the other X-Men in battle with the Sentinels. Cyclops notes these models aren't as effective as the previous ones, just as Jean telepathically contacts him, telling him where Banshee and Wolverine are. Cyclops sends the X-Men to rescue them and goes off to rescue Jean himself. Just as Lang is about to kill Jean and Xavier, Cyclops arrive and savagely beats Lang before being attacked from behind. As the other X-Men free Banshee and Wolverine, Lang gloats that the Sentinels aren't the true heart of Project Armageddon. Just then, the X-Men come face to face with the original X-Men, whom Professor X orders to attack.

Firsts and Other Notables
Black Tom Cassidy, Banshee's villainous cousin, appears briefly and for the first time, in shadow. More on him shortly.

This issue also contains the first mention of Colossus' older brother Mikhail. Colossus says he was a cosmonaut who died during a space launch; in the early 90s we'll learn he wasn't killed during that launch but actually shunted into another dimension (as will happen). Mikhail will go on to have a presence in the X-Men universe off and on for several years thereafter. 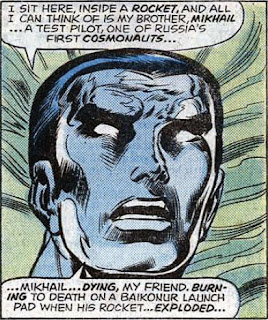 A Work in Progress
A news report reveals that Judge Chalmers, Larry Trask's ally in the Thomas/Adams Sentinel story back in issues #57-59, has become a pro-mutant activist since the events of that story, and that his house was firebombed as a result. Chalmers also gets a first name in this issue (Robert).

Starcore One, a deep space monitoring station run by the same multi-national group to which Peter Corbeau belongs, appears in X-Men for the first time (it's appeared previously elsewhere). As the X-Men get more involved in cosmic events, it'll pop up every once in awhile.

It is established that Storm swore an oath to her deceased parents never take a human life.

Also, it's revealed that her powers work on the "cosmic storm", enabling her to manipulate solar winds (the Classic X-Men reprint of this issue eschews that via some redrawn pages in favor of having her move through space via her spacesuit). 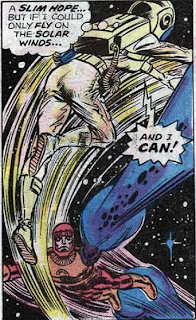 That 70s Comic
The Sentinels rescue the escaped X-Men at the beginning using "atmos-spheres" a delightful comic book-y term. 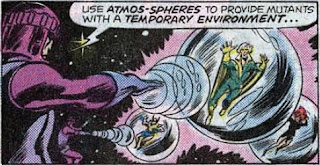 Geraldo Rivera is one of the reporters commenting on the rise of anti-mutant activity. 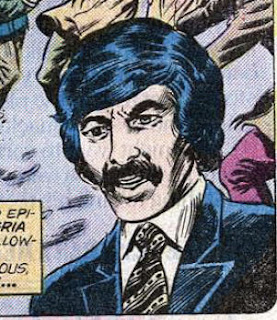 Needless to say, the physics on display here are a bit dodgy, as Wolverine, Banshee and Jean Grey chill in space for several moments before being rescued by Sentinels, and later Corbeau simply smashes the shuttle into the space platform, after which the X-Men climb out, despite the less-than-airtight hole the shuttle made.

The romanticizing of pilots/astronauts. Claremont loves aircraft and his pilots are always classic romantics who love what they do. In this issue, astronaut Peter Corbeau comments on feeling like he's going home while waiting to blast off into space. 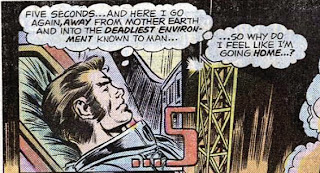 The use of a news reporter to deliver exposition/set a scene. It's been done before and will be done by other writers, but Claremont especially likes to use this device, and will, over the course of his run, even build up some of the reporters into recurring characters.

The "inner monologue", in which members of the team are given a moment/panel alone with their thoughts before a big event occurs, enabling Claremont to highlight aspects of each characters' personality based on how they react to the upcoming situation.

Here, just prior to the shuttle launch, we see Cyclops worry about Jean, Storm struggle with her claustrophobia, Colossus upset that he's afraid, and Nightcrawler excited by the adventure of it all. 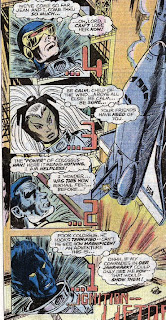 Also, Colossus drops a "tovarisch" for the first time.

Young Love
Colossus freaks out when Storm is sucked out of the shuttle, and overjoyed when she turns up alive and well, evidence of romantic subplot between the two which is shortly aborted and transitioned into their more familiar brother/sister relationship. 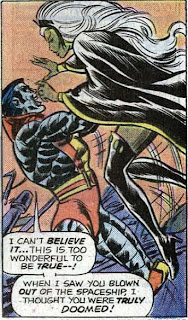 Human/Mutant Relations
In the wake of the Sentinel attack on Christmas Eve, anti-mutant fervor is sweeping the nation.

It's in the Mail
Noted comic book historian Peter Sanderson, who famously read every DC comic published in order to fact check Crisis on Infinite Earths and contributed to the original Official Handbook of the Marvel Universe, has a letter published in this issue. 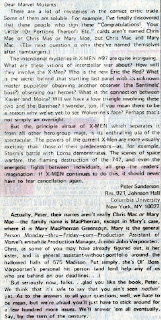 Dave Cockrum on Colossus' design
"Back in college I had come up with a character called Mr. Steel. There were a lot of differences between the two characters, but he was certainly my inspiration for Colossus. The one problem that Len had with Colossus was that I had originally given him bare legs, and Len didn't like characters with bare legs...like Robin...I originally had bare legs on Colossus' costume, so we decided to give him blue legs. For some reason, the material disappears when he turns into Colossus".

Teebore's Take
While it's definitely no big deal these days, with the X-Men having gone from one end of the galaxy to another and gotten embroiled in wars between alien empires, here they travel into space for the first time, and it appropriately feels like a big deal. The highlight of this issue is easily the launch of the space shuttle and the X-Men's voyage to the orbital platform. Cockrum turns in some of his best art yet for this sequence, rendering the launch sequence in vivid detail. Claremont, meanwhile, uses the opportunity to delve into the minds of his cast. While the technique displayed here is archaic by today's standards (and something Claremont's modern detractors hold against him), at the time Claremont was working with several brand new characters, and these brief glimpses into their inner monologues provide an easy way to further familiarize readers with the characters. Jason Powell referred to these inner monologues as a form of "heightened reality", not unlike the similar devices used in plays. It may not represent the most realistic or contemporary style of writing, but there's definitely a certain charm about it.
Newer Post Older Post Home
Posted by Austin Gorton at 8:00 AM