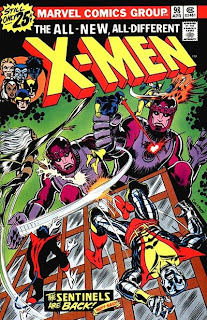 In a Nutshell
The Sentinels return.

Plot
The X-Men are in New York City, enjoying the Christmas season. Eventually, they split up, with Nightcrawler and Colossus meeting attractive stewardesses Amanda and Betsy, Banshee and Moira going sightseeing, and Cyclops and Jean going to dinner. Just as Cyclops and Jean arrive at their table they are attacked by a new model of Sentinel, sent by Steven Lang. Though they manage to overpower one robot, another knocks Cyclops out the window and captures Jean before departing, believing Cyclops dead. Cyclops reunites with Banshee and Wolverine, only to see them captured by Sentinels as well. Meanwhile, while on a fishing trip with his friend Peter Corbeau, a Sentinel attacks and captures Professor X. 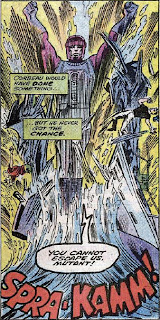 Days later, Lang gloats over his captives, telling Jean that killing the X-Men will make exterminating all other mutants that much easier. Lang then slaps her, which sends Wolverine into a berserk rage, allowing him to break free and release Jean and Banshee. The trio is quickly overwhelmed by Sentinels and attempt to flee the base. Back at the mansion, Cyclops has spent the last four days using Cerebro to scan for the missing X-Men when Peter Corbeau arrives and together they realize why Cerebro can't locate them: because the captured X-Men aren't on Earth. Just then, Banshee, Wolverine and Jean escape from Lang's orbital space platform base into open space.

Firsts and Other Notables
The Sentinels return (this is technically the first appearance of the Mark III Sentinels), created and unleashed by Steven Lang as part of Project Armageddon in his quest to exterminate mutants.

Wolverine's claws are revealed to be part of him, and not part of his costume (before this issue, it was believed that the claws were part of his gloves). Wolverine is also seen smoking for the first time, though he appears to be smoking a cigarette and not one of this trademark cigars. 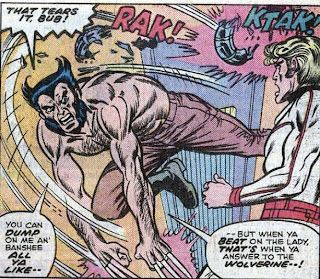 Amanda Sefton appears for the first time, briefly, as an object of Nightcrawler's affection. She eventually becomes his love interest (and will much later briefly join future X-Team Excalibur). Later stories will reveal her to be Nightcrawler's surrogate sister and an accomplished sorcerer, though Nightcrawler doesn't realize the woman he randomly bumped into in New York is the same as his quasi-sister. It's all rather...complicated. We'll get there eventually.

To a lesser extent, Amanda's stewardess friend Betsy appears for the first time. She'll serve as a slightly recurring and rather minor love interest for Colossus before fading away without amounting to much.

Dr. Peter Corbeau, head of Project Starcore, appears in X-Men for the first time, though he has made appearances in other titles prior to this. Revealed to be an old colleague of Xavier's, he'll stick around as a minor supporting character for awhile.

A Work in Progress
Professor X, while trying to free the Sentinels, gets another mental flash of the alien being attempting to contact him.

It is established that both Cyclops and Jean Grey have experienced an increase in their powers of late. 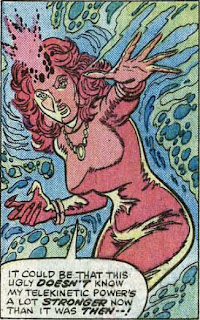 Jean appears in a black evening dress (which gets torn by Wolverine) in this issue, which thanks to the Phoenix saga and the "Inferno" storyline becomes something of an iconic X-Men image.

Similarly, the revelation at the end of the issue that Cerebro can't locate the missing X-Men because "they're not on the Earth at all!" becomes something of a repeated X-Men trope, featured by, amongst others, Scott Lobdell during the mid-90s "X-Cutioner's Song" crossover and later by Grant Morrison as part of his penultimate story on New X-Men. 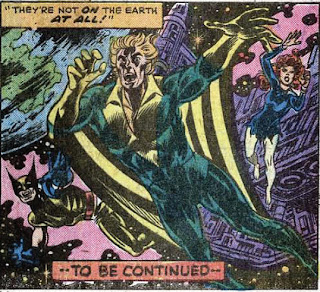 The first line of dialogue of the first Sentinel to appear is part of the story's title, which is the same way the Sentinels were re-introduced in issue #57.

One of Lang's techs comments on the odd readings they get from Wolverine. This is the only in-print reference to Len Wein's idea that Wolverine was actually a real wolverine mutated into human form by the High Evolutionary. The idea isn't referenced again (and was apparently nixed by Stan Lee). 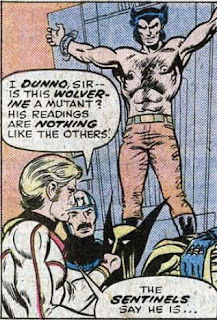 The Classic X-Men backup story accompanying the reprint of this issue hints heavily that Jean intended to have sex with Scott for the first time after their date, which was of course interrupted by the Sentinel attack, giving the events to come a certain retroactive poignancy.

This issue doesn't show Banshee and Wolverine getting defeated and captured by the Sentinels (Cyclops tells Storm he saw the Sentinels leave with them); however new original pages added to the Classic X-Men reprint depict the event.

That 70s Comic
Stan Lee and Jack Kirby appear in this issue, commenting on how chaste things used to be when they were in charge of the book. 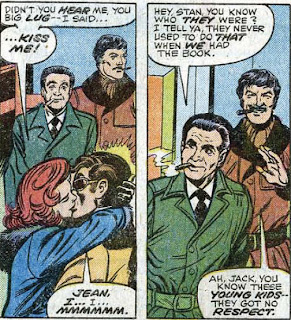 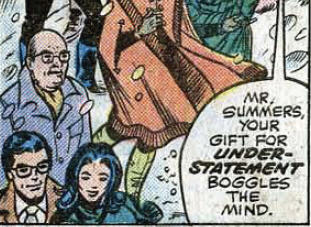 While the Sentinels would have no problem traveling from Earth to their outer space base, it is never made clear how they transport their X-Men captives through space without killing them.

Cyclops notes that Wolverine has been with the team for "almost a year", showing that the creators are still thinking of each issue as occurring in real time (this is the fifth bi-monthly issue to feature the new X-Men since Giant Size X-Men #1, so it's been just under a year since the new team's debut). Also, Jean refers to the last Sentinel attack as occurring in 1969, which is when the Thomas/Adams Sentinel story was published.

Young Love
Love is in the air as Banshee and Moira leave to see the sights of New York together, Nightcrawler and Colossus leave with Amanda and Betsy and Cyclops and Jean go to dinner together.

It's in the Mail
Jo Duffy, who would go on to be a writer and editor at Marvel in the 80s, has a letter published in this issue. 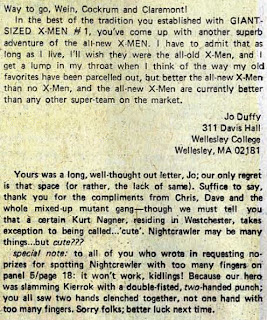 Teebore's Take
Claremont and Cockrum begin their first extended riff on the Thomas/Adams run by bringing back the Sentinels. It is telling that the first previously-established villain that Claremont turns to for the new X-Men are the Sentinels. Whereas it took Lee and Kirby fourteen issues to personify the idea of human persecution of mutants in the form of a villain, Claremont, like Thomas and Adams, recognizes that the Sentinels cut to the core of the X-Men's themes, and he wastes little time after taking the reigns to present his own spin on the story.

It is not a coincidence that Stan Lee and Jack Kirby appear in this issue, commenting on how things have changed since their day. This is the first story featuring the new X-Men which, thanks to the presence of the Sentinels, connects the three (at the time) most significant eras of the book: Lee and Kirby's original run, Thomas and Adam's reinvention of their work, and now Claremont and Cockrum. By having Lee and Kirby comment on the changed relationship between Scott and Jean, then shortly thereafter using the Sentinels to illustrate the increase in their powers, Claremont is underscoring a point: these characters have changed through the years, and their encounters with the Sentinels in three different X-Men eras stand as touchstones of those changes. Claremont is very much a proponent of developing and evolving characters over time, and this issue begins a chain reaction of events that will carry through directly to the conclusion of "The Dark Phoenix Saga" in issue #137, and indirectly, even further. In the wake of those events, we'll see some of the most significant character development in super hero comics occur.
Newer Post Older Post Home
Posted by Austin Gorton at 8:00 AM