Notable Notes
Nancy Cartwright received an Outstanding Voice-over Performance Emmy for her performance of Bart in this episode.

Favorite Quotes
Janey: Well, that was a waste of time.
Lisa: Janey, school is never a waste of time.
Ms. Hoover: Since we have fifteen minute until recess, please put down your pencils and stare at the front of the room.

Marge: Bart's grades are up a little this term. But Lisa's are way down.
Homer: Oh... We always have one good kid and one lousy kid. Why can't both our kids be good?
Marge: We have three kids, Homer.
Homer: Maaarge, the dog doesn't count as a kid!

Bart: Seymour, this is an absence slip signed by Nelson's mother. And this is Nelson's English homework. Notice the identical elongated loops on the d's.
Skinner: Forgery! So he didn't have leprosy! 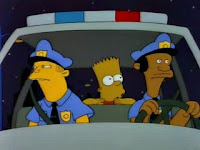 Teebore's Take
Another favorite of mine from this season. This episode is one of the quintessential Bart/Lisa episodes, strengthening their characters by putting them in unfamiliar roles. In addition to being wonderfully funny it's also a great showcase for the show's satire. Along the way, this episode skewers modern education (the children take the "Career Aptitude Normalizing Test", or CANT, filled with loaded questions like, "if I could be any animal, I would be (a) a carpenter ant, (b) a nurse shark, or (c) a lawyer bird."), police corruption (Bart asks Eddie and Lou if they like being cops, and they respond, "Oh, it's great. You get to run red lights, park wherever you please, hot and cold running chicks..."), and teacher standards (the teachers freaking out after Lisa has stolen all of the teacher's editions is a highlight of the episode). Those all may seem like easy targets nowadays, but when this episode first aired, it probably raised more than a few eyebrows. Toss in a sweet ending, in which Bart sacrifices himself for Lisa, the one family member with the potential to actually accomplish something in life, and it's clear the show is definitely coming into its own.

A standout Bart and Lisa episode that showcases The Simpsons ability to marry sitcom humor with scathing social satire. 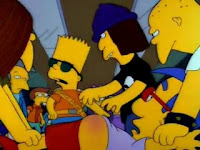