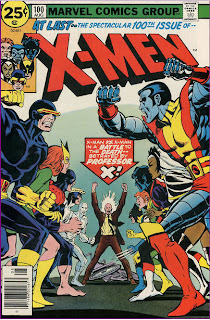 In a Nutshell
The X-Men defeat Lang and his Sentinels, but get caught in a solar flare on their way back to Earth.

Plot
The new X-Men are face to face with the original X-Men as Professor X orders the originals to attack what he claims are impostors. As Steven Lang watches on a monitor, the two teams battle, with the new X-Men mystified by their predecessors' viciousness. After getting hit with a telepathic bolt by Marvel Girl, Wolverine senses the truth, and to the shock of his teammates, disembowels Marvel Girl, revealing her to be a robot. 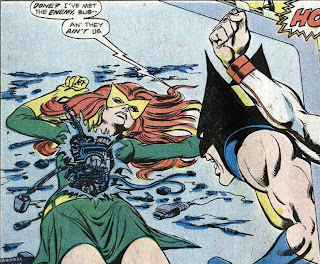 As the real Cyclops slowly overpowers the Nega-Tube holding him captive, Lang bemoans the loss of his X-Sentinels, and reflects on the creation of Project Armageddon as an outgrowth of Larry Trask's work, with the X-Sentinels intended to be the tools of mutantkind's extermination. Just then, Cyclops blasts free and releases the other captives. As the other X-Men dispatch the rest of the X-Sentinels, Lang boards a gun ship and attacks Cyclops, but Jean telekinetically manipulates the controls and Lang spins out of control, crashing in an explosion that seemingly kills him. The X-Men and Peter Corbeau return to the Starcore shuttle to escape, but there is still a hole in the hull, the flight computer is damaged, and their re-entry will take them on a path through a dangerous solar flare. Jean volunteers to fly the shuttle manually, telepathically absorbing Corbeau's knowledge and using her telekinesis to patch the hole and screen out the flare's radiation. Knocking Cyclops out when he objects, she sends Corbeau and the others to safety in the shuttle's shielded life cell as she leaves the station. Twenty minutes from Earth's atmosphere, however, her shields are overwhelmed and Jean is bombarded with solar radiation as she calls out for Cyclops.

Firsts and Other Notables
We get our first fastball special in this issue, as Colossus hurls Wolverine at Angel! 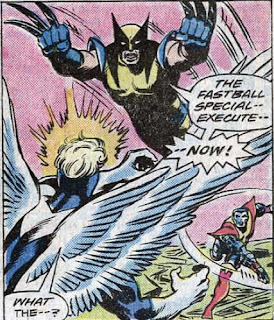 Lang mentions being funded by the Council of the Chosen. Later stories (most notably the Classic X-Men backup to issue #99) will connect this group to the Hellfire Club. The idea is that the anit-mutant Council of the Chosen funded Lang's work before being ousted by the pro-mutant Inner Circle, which will make its first full appearance in issue #129. 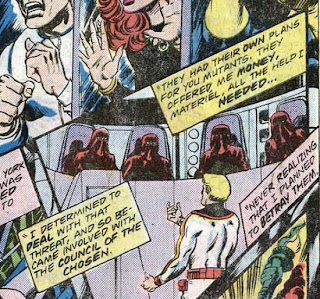 There's two fun scenes in this one. The first is when Wolverine confronts the Professor X X-Sentinel and Professor X proceeds to stands up out of his chair and simply deck Wolverine. The other is after Wolverine exposes the X-Sentinels and the action shifts to Lang's control room. As he and Cyclops fight, in the background you can continue to see the X-Men battling and ultimately defeating the X-Sentinels on Lang's monitors.

A Work in Progress
Wolverine's enhanced, animalistic senses are highlighted for the first time, as he manages to sense that the Marvel Girl X-Sentinel is a robot. 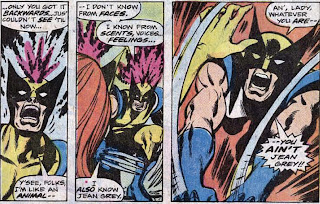 Storm cites her friendship with Jean, both during the battle with Jean's robotic doppelganger and later when Jean is preparing to fly the shuttle. The former is especially dicey, as X-Sentinel Marvel Girl says she recalls no such relationship, but at this time, such a relationship is also largely unknown to readers. Only those of us reading this issue retroactively (or having read the Classic X-Men backups) are aware of the friendship; new readers at the time were probably as mystified by Storm's claims as the robot was. 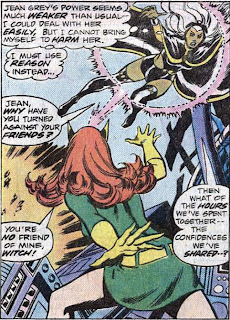 Wolverine refers to Jean as "Jeannie" for the first time (and gets verbally bitch-slapped for it, though Jean is under a lot of pressure at the time...). 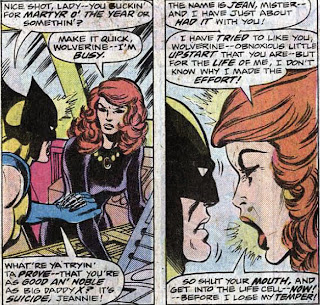 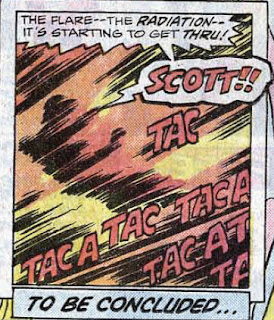 The Vanisher is seen briefly as one of Lang's test subjects in a flashback. Champions #17 picks up on this thread, revealing that Lang's orbital base wasn't destroyed and that when Vanisher awoke, he reprogrammed three remaining Sentinels to do his bidding, after which he, Blob, Unus and Lorelei use them against the Champions.

Visual clues that the original X-Men are fakes of some sort:
Cyclops' visor is the older design, thinner and straighter than his current one.
Beast isn't blue and furry.
Angel is wearing the costume he received from Magneto which was later revealed to be sapping his energy.
Polaris is wearing her older "Queen of the Mutants" costume.

That 70s Comic
Jean's telekinesis is extremely powerful here, as its apparently strong enough to form an airtight seal between space and the hunk of wreckage she uses to plug the hole in the shuttle. And the whole "telekinetically filter out the radiation" only makes sense so long as you don't think about it too much (though, to be fair, this ultimately doesn't work).

Young Love
Cyclops gets mad at Jean when she decides to pilot the shuttle through the solar flare. 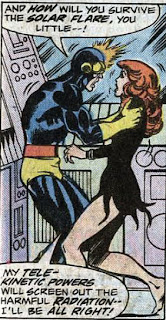 Wonder how he was going to finish that sentence...

Later, Cyclops freaks out upon waking up in the ship's life cell. 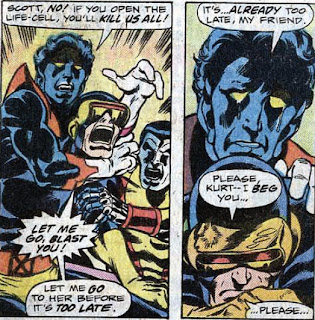 Human/Mutant Relations
Within the course of two panels, Lang curses mutants then begs for their help.

For Sale
It's a Spider-Man mood ring! 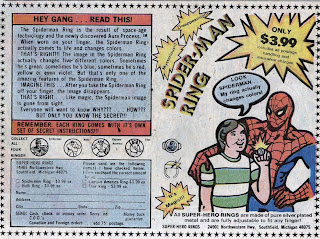 Before G.I.Joe: A Real American Hero, there was the GI Joe Super Adventure team! 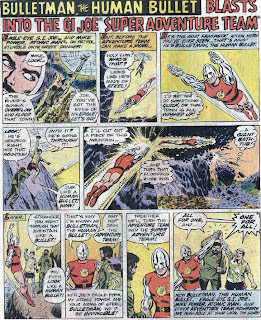 Dave Cockrum on Jean's exposure to cosmic rays
"...[T]hat's what Chris had in mind. He even told me to play off the origin of the Fantastic Four with the cosmic rays and that whole 'TACATACATACA' sound effect. Although, later on, he established that the Phoenix force - which was actually a separate space-going entity - had entered her at that point."

Teebore's Take
The new X-Men's first encounter with an old X-Men foe comes to a close. As will come to be the norm, the ending of one story leads into the beginning of the next, as Jean Grey makes a crucial decision, the ramifications of which will reverberate in the book for years to come. That final panel is affecting, as Claremont cranks up the melodrama. "Lord I'm scared...I don't want to die..." Jean says as they pass into the flare. "Twenty-seven minutes to Earth's atmosphere. Not long at all. Just the rest of my life." This is heavy stuff, and Claremont makes us feel for Jean in what may be her final moments. It may seem quaint or dated now but it creates a sense that these characters are as realized as any fictional characters, that the creators, at least, view them as something more than interchangeable players in a fantastic plot. Underneath all the comic book trappings, beyond X-Sentinels and solar flares, Jean Grey is just a young woman risking her life for her friends, scared she's going to die. Despite knowing what happens next (or perhaps even because of it), it still gets to me.

Centennial issues in comics are usually a big deal, a celebrated anniversary that often looks back over a title's history. X-Men at 100 is in an odd place; a good chunk of its preceding issues simply consisted of reprints of existing stories, and the current stars of the book have all of six issues worth of history under their belt. So Claremont borrows some history from the old team, and has the new team face off against their predecessors in a hook that must have snared more than a few casual readers back in the days of spinner racks. Though the old X-Men are quickly proven to be robotic facsimiles thereof, it's a fitting visual for the book's 100th issue, as the new characters, currently making their own history (history which we know will, in many ways, far surpass the original characters'), clash with representations of the characters whose book got canceled. It is also fitting that the X-Men's 100th issue ends with Jean Grey, the character who first introduced us to the X-Men back in issue #1, on the verge of her most significant transformation.
Newer Post Older Post Home
Posted by Austin Gorton at 8:00 AM