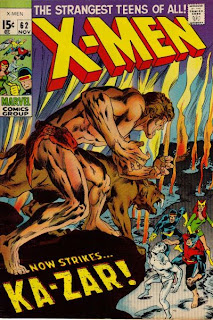 "Strangers in a Savage Land"
November 1969

Plot
Angel is stunned while battling pteranodons underground, and falling, recalls shaking off the effects of Sauron's hypnotism and following the X-Men to Tierra Del Fuego, where Tanya Anderssen told him the X-Men went down a chasm to find Lyko's body. Angel falls out of the cavern into a warm valley, unconscious. He is shortly found by the frog man Amphibius and the gray-haired Creator. Meanwhile, the other X-Men encounter Ka-Zar while battling dinosaurs, confirming their suspicions that they've reached the Savage Land. Ka-Zar separates from the X-Men and sees a group of Swamp Men transporting a captive member of the Water People. Ka-Zar tries to free the prisoner but his brought low by Equilibrius, a mutated Swamp Man who causes vertigo. The X-Men come to his rescue. 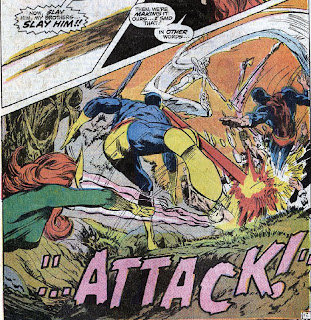 Elsewhere, the Creator revives Angel and introduces his followers, claiming they are mutants he has gathered. Equilibrius, injured in the X-Men's attack, arrives and Angel, feeling he owes the creator his life, agrees to help the Creator against the X-Men. Angel flies off, leaving the Creator alone to gloat that Angel will buy him the time he needs while opening a door to reveal Magneto's helmet...

Firsts and Other Notables
This issue is the first appearance of the Savage Land Mutates (Amphibius, Barbarus, Brainchild, Equilibrius, Gaza, Lupo and Piper), Swamp Men whom Magneto has mutated. Though little more than colorful henchmen, they become a staple of stories set in the Savage Land, and will pop up in some combination or another pretty much anytime a character goes there.

Retconned robots aside, Magneto returns, having been absent since issue #45. This is also the first time Magneto is seen without his helmet. 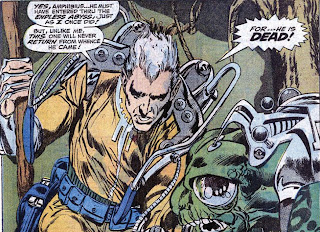 A Work in Progress
Angel gets a new blue and white costume from Magneto (apparently Neal Adams didn't like ANY of Angel's costumes, as this is the characters' third since Adams took over). This will be his regular costume for awhile. 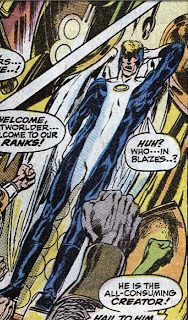 The location of/access to the Savage Land is a little dicey in this issue. The X-Men and Angel travel there via Tierra Del Fuego, which is nearer to Antarctica than, say, Minnesota, but there's still a good chunk of ocean between the two. The X-Men even point this out to Ka-Zar who shrugs it off by saying his kingdom is huge (so clearly Thomas and Adams recognize the problem). And Angel gets to the Savage Land by falling down a large chasm, suggesting the Savage Land is underground (it's not).

Magneto wasn't captured by the Sentinels several issues ago because he was hiding in the Savage Land following the events of issues #43-45 and Avengers #53.

Ah, the Silver Age
It takes Ka-Zar's appearance to convince the X-Men, who are battling dinosaurs in a tropical jungle, that they are truly in the Savage Land. 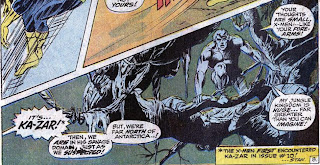 It's in the Mail
One reader wonders where the Marvel Girl origin backup story is; it's promised, but never delivered. 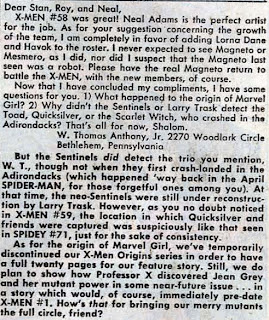 Roy Thomas on sales of the series
"I remember there were two issues near the end where we suddenly noticed a spike in sales. One of them was X-Men #62, the one with the big Ka-Zar figure on the cover that was so dramatic...I remember the sales figures looking a little better, and yet Goodman cancelled it based on -maybe- the projected numbers for the next issue. So sales on #62 were up, and a month later we were canceled. I think the cover to the second part of the Ka-Zar story wasn't as dramatic as the first one, and the sales may have dipped a couple points. So Goodman probably decided the rise was a fluke and canceled the book."

Teebore's Take
Thomas and Adams continue their Lee/Kirby retrospective, bringing the X-Men to the Savage Land while presenting their riff on Magneto. Along the way, they make more lasting contributions to the canon (along with Havok, Larry Trask and Sauron) in the Savage Land mutates and, more importantly, a slightly revised version of Magneto. As evidenced by his appearance out of costume for the first time, the Thomas/Adams Magneto represents a slight step away from the raving Silver Age megalomaniac version of the character that has defined him thus far, bringing him that much closer to the more nuanced, three dimensional version of the character that will stand as one of Chris Claremont's greatest creations (a characterization Claremont will begin shortly after writing the last, and perhaps the best, Silver Age Magneto story).

Granted, the Thomas/Adams Magneto isn't that far removed from the character who made Toad wear a metal belt so he could punish him, and the next issue will reveal his goals to be as world-dominating as ever. But by portraying Magneto as something more than a villain, both in appearance and in action (as the perceived Professor X-like savior of the Savage Land Mutates), however false that portrayal ultimately proves to be, Thomas and Adams are helping move Magneto to a place where, for the first time, he can be something more than a raving lunatic.
Newer Post Older Post Home
Posted by Austin Gorton at 8:00 AM