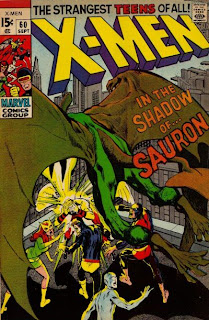 In a nutshell
Sauron appears for the first time

Plot
The X-Men depart the Sentinels' base with the injured Alex, leaving Judge Chalmers to wipe Trask's memories via his medallion and to free the remaining prisoners. Scott and Jean take Alex to see Dr. Lykos, an old associate of Professor X. He tells them that Alex will be fine, but he needs to look after him in private, asking them to return later in the evening. Scott and Jean return to the mansion, and join the others training in the Danger Room.

Unknown to them, Lykos sucks the energy from people in order to survive, and worked with Xavier in order to locate mutants and feed off their greater-than-human energy. Draining Alex, he transforms, due to the huge amount of energy, into a humanoid Pteranodon ruled by his evil side, and names himself Sauron. At the mansion, the X-Men hear reports of Sauron that are blamed on mutants, inciting Angel, who dons his old costume and flies off into the city. He soon encounters Sauron, and after locking eyes with him, screams.

Firsts and Other Notables
This issue is the first appearance of Sauron, who remains a relatively-minor but consistent member of the X-Men's rogues gallery, as well as the first full appearance (after a cameo at the end of last issue) of Sauron's alter ego, Dr. Karl Lykos. Sauron is humanoid pteranodon who sucks energy from and hypnotizes people. Lykos intentionally names his alter ego after the villain from Lord of the Rings because he's just as evil. Future stories will show this to be an overstatement. 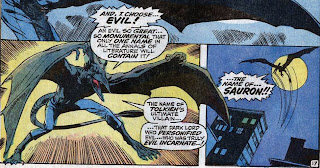 Sauron's origin is also recounted: as a child, Lykos was traveling with his father and the Anderssen family in Tierra Del Fuego and rescued Tanya Anderssen from a flock of pteranodons, one of whom bit him. As he got older, Lykos discovered he needed to draw energy from other people to stay alive. Hoping to impress Tanya's father so he could marry her, he became a doctor and used his position to draw energy from his patients, eventually working briefly with Professor X to locate mutants (believing mutant energy would sustain him longer). 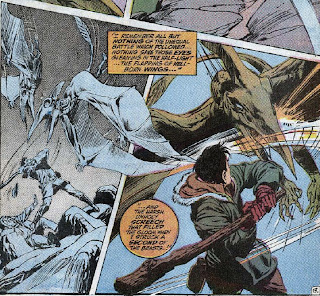 Lorna more or less joins the X-Men in this issue, saying there's no other place for her and she belongs with the team, though she hasn't received her codename yet. 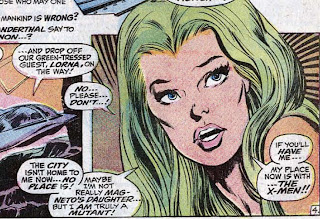 A Work in Progress
Larry Trask is in a state of shock, and Chalmers believes putting the medallion back on Larry will make him forget about his mutant power and anti-mutant crusade. The X-Men, presumably because they're more concerned about Alex, seem to be okay with letting the man who unleashed the Sentinels on them go free. 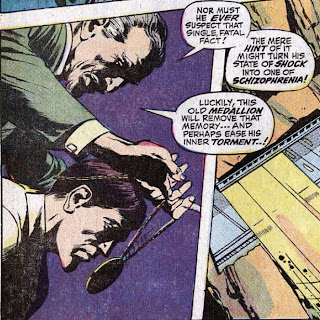 Similarly, Judge Chalmers releases all the captive mutants and lets them go on their merry ways, even the criminal ones. 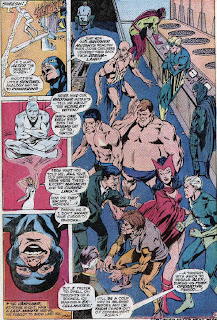 Chalmers, Trask and the sun-bound Sentinels will be seen next in Avengers 102-104, also penned by Roy Thomas, which is essentially a sequel to this story. In that story, Trask is killed helping the Avengers defeat this batch of Sentinels once and for all.

It's revealed that in the past Professor X worked with Karl Lykos on something called "Project Mutant". Little is made of this, and it seems to simply be a plot device meant to explain the X-Men bringing Alex to Lykos.

It's specifically mentioned that the Sentinels captured all the known mutants except Changeling and Magneto, which is setting up two future stories.

Angel returns to the Avenging Angel costume he wore before joining the team (as seen in his backup origin story) because he's angry about the way mutants are being treated. But really, it's just an excuse to get him out of an ugly costume.

The book's logo gets tweaked by Sam Rosen, using the same Steranko design but with slightly different proportions that will remain the standard for years to come. The tagline "Strangest Teens of All" also returns, and will remain throughout the rest of the book's Silver Age run.

Ah, the Silver Age
Cyclops references the title character from Ben Casey, a hospital drama from the mid-60.

Scott accidentally stumbles into the Danger Room. To be fair, it has been awhile since they were at the mansion... 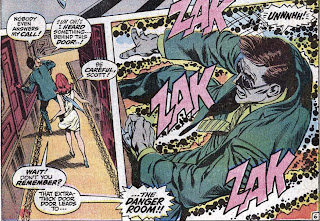 Dr. Lykos helpfully narrates his transformation into Sauron for us, as only comic book villains can. 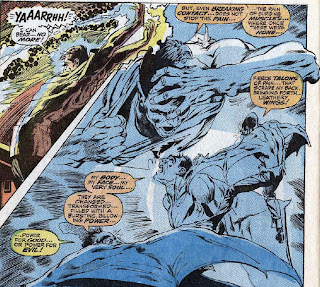 Young Love
Scott and Jean leave Alex with Dr. Lykos and go for a drive in Angel's new car. 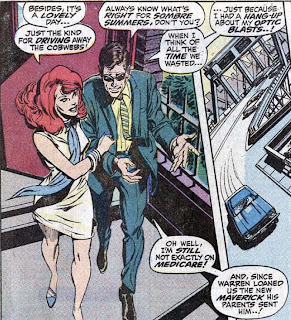 Later, Lorna claims she's "no one's girl", which is either a feminist statement or further indication that she's become less enamored of Bobby. 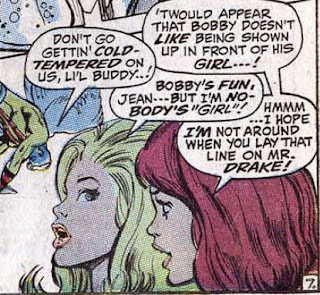 Human/Mutant Relations
The X-Men take Havok to Dr. Lykos because of his past association with Professor X, fearing that the fact that mutants are still considered a menace by the federal government would cause problems with any other doctor.

It's in the Mail
With the arrival of Neal Adams, the hyperbole on the letters' page suddenly seems less hyperbolic. 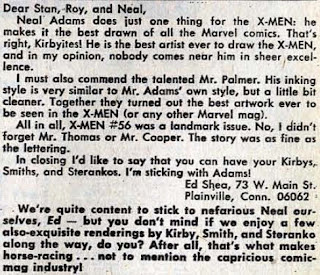 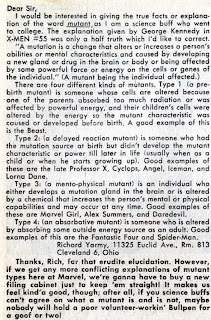 Neal Adams on the creation of Sauron
"Sauron's an interesting one, because at the time of his creation I'd sort of been battling with the Comics Code...The Comics Code wouldn't let you put a vampire in a comic book story. So I wondered if it was possible to come up with a character that was just like a vampire, but would still pass the Comics Code. If you look at Sauron, he's basically a vampire, but an energy vampire...I couldn't have him turn into a bat because that was too obvious. What else flies and has leathery wings? A pterodactyl. Okay. So a pterodactyl bites somebody. He gets sick and seems to die. But he comes back to life by drawing energy from someone else. Sauron was basically a vampire and the Comics Code never spotted it."

Teebore's Take
As Neal Adams says, Sauron is basically another attempt to get around the Comics Code restrictions regarding vampires (see also: Spider-Man's Morbius, the living vampire) by making Sauron suck energy instead of blood and turn into a Pterodactyl Man instead of a bat. As such, this enables Roy and Neal to tell a vampire story utilizing familiar vampire/monster story tropes: the innocent victim who gets turned, who must fight against his more evil urges before transforming into a full fledged monster preying on the weak. And though Sauron may have been designed as such due to the visual similarity between bats and pteranodons, by making their energy vampire a pre-historic creature, Roy and Neal are also tying this story to the Savage Land, another Lee/Kirby idea that Adams and Thomas will shortly present their own spin on as well.
Newer Post Older Post Home
Posted by Austin Gorton at 8:00 AM