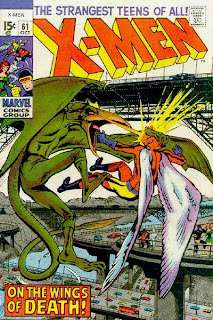 In a nutshell
The X-Men fight Sauron (the pterodactyl man, not the Lord of the Rings villain).

Plot
Hypnotized by Sauron, Angel believes that three monsters are attacking him.He quickly realizes they are illusions, and proceeds after Sauron. The X-Men arrive and join in the fight. As the X-Men and Sauron battle, back in Dr. Lyko's office Alex is stirred awake by a ringing phone. Sauron begins transforming back to Lykos and quickly hypnotizes Angel into flying him back to his office. There, he discovers Tanya waiting, who has disobeyed her father to be with him. The X-Men, in their civilian identities, arrive at the office to pickup Alex and enter the office just as Tanya's father arrives and angrily denounces her relationship with Lykos. 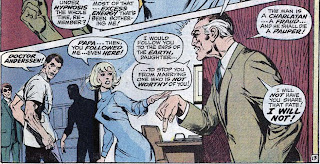 The X-Men return to the mansion and find an entranced Angel. When he freaks out upon hearing Lykos' name, the X-Men decide to search for the doctor, leaving Alex and Lorna behind to read through Professor X's notes on Project: Mutant. But Lykos, craving more mutant energy, has come to the mansion, and drains Lorna, transforming back into Sauron. He proceeds to drain both Alex and Angel and travels to the home of Tanya's father to kill him. The X-Men, suspecting Lykos might have gone there, arrive in time to stop him.  Sauron, realizing that Tanya wouldn't forgive him for killing her father, flees in an attack of conscience. He flies to his father's old cabin in Tierra Del Fuego in order to slowly die from a lack of energy. Several days later, Tanya, suspecting where he had gone, arrives. Lykos, knowing he'd kill her in his weakened, hungry state, leaps off a cliff in order to spare her. The X-Men, who followed Tanya, prevent her from following Lykos, but arrive too late to save him.

Firsts and Other Notables
Sauron dies (but not really; his next appearance will explain how he survives).

There's a great double page spread where Adams sets the panels retelling Sauron's origin within one of his wings.


A Work in Progress
Lorna discovers in Professor X's notes that Sauron is technically a "non-mutant variant", which I think is just a fancy term for someone with weird powers who's not a mutant (so I suppose according to Professor X, Spider-Man is also a non-mutant variant).

Despite the fact that Sauron is a man-shaped Pteranodon, he apparently sounds just like the human Dr. Lykos, as both Tanya and her father recognize Lykos' voice when he attacks them as Sauron.

The letters column in this issue is only one page, not two as had previously been the case. If memory serves, this is the first time a one page column was run instead of two (though one page letter columns will quickly become the norm, before getting phased out entirely in the last several years).

Ah, the Silver Age
Lorna narrates out loud some information that comes in handy to an overhearing Sauron. 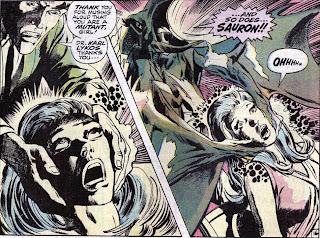 Build up your Vocabulary with Beast
Loquacious: adj. Full of excessive talk; wordy.

As in, "That has all the earmarks of one of my loquacious lines! 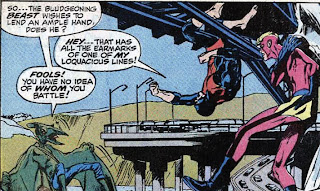 Tanya's father is a real charmer. 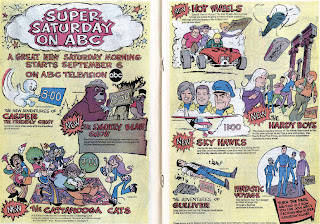 Teebore's Take
While the main idea behind the story works (man embraces his dark side, then overcomes it in the name of love and sacrifices himself to keep his evil in check) there's some dodgy plotting going on to get there. Tanya and her father are more plot devices than characters in their own right, and Karl traveling to Tierra Del Fuego to slowly commit suicide in order to end the menace of Sauron (instead of, you know, jumping off a building in Manhattan or something) is done mainly to setup the next story (hint: Tierra Del Fuego is close to Antarctica). Still, great art can go a long ways towards smoothing over rough story edges, and Neal Adams continues to turn in impressive work.
Newer Post Older Post Home
Posted by Austin Gorton at 8:00 AM