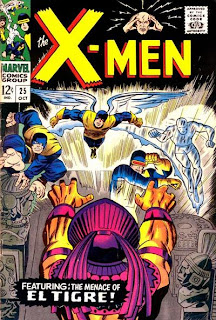 Plot: Following their defeat of the Locust, the X-Men are driving Jean back to her college when they come across a burning orphanage. They change into their costumes and help safely free the orphans from the burning building, hightailing it out of there once the fire department arrives.

Meanwhile, somewhere in Central America, the gem-hunter Juan Meroz, known as El Tigre, has located the hidden pyramid of the Mayan god Kukulcan. He and his two companions discover Kukulcan's cursed sacred gold, and amongst the treasure is a glowing stone that seems to be cut in half. Later that night, when his companions attack him, El Tigre discovers the stone has granted him super powers, which he uses to kowtow his mutinous companions into servitude. The stone also grants him the ability to read the pyramid's hieroglyphics, from which he learns that the stone is one half of an amulet that, when reunited, will grant the wearer tremendous power. El Tigre vows to find the other half.

Back at Xavier's mansion, the male X-Men are relaxing when Cerebro detects the presence of a powerful threat approaching Manhatten. Xavier sends the X-Men to investigate at the same time El Tigre and his entourage arrive, having been drawn by the pendant to "Nueva York". The X-Men scour the city in search of Cerebro's vague menace. Coming up empty, the X-Men regroup at the hotel at which they're staying and see a news report involving El Tigre. Just then, Professor X telepathically confirms that El Tigre is the menace they face, and that he is heading towards the City Museum.

The X-Men arrive at the museum shortly after El Tigre. They split up to search for him and Beast, Iceman and Angel all meet defeat at the hands of El Tigre's goons. Just as Cyclops finds El Tigre, a museum guard interrupts and El Tigre uses his pendant to take control of the guard's mind. He forces the guard to hold Cyclops at gun point while El Tigre reunites the two halves of the pendant, transforming him into a manifestation of Kukulcan.

Firsts and Other Notables: Footnote-villain El Tigre appears for the first time. Needless to say, he doesn't make much of an impact on the X-Men or the Marvel Universe in general, though he is noteworthy for being the first non-white speaking character in "X-Men", three years into the title's run. And even then, "non-white" is being generous: El Tigre and his "Amazonian" henchmen are more or less colored as Caucasians, but they are technically from Central America.

A Work in Progress: Having regained the ability to walk thanks to his new braces, Professor X is now bemoaning the fact that he has to stay out of the action for fear of compromising the secret identities of the X-Men. Because apparently Professor X has been taking emo lessons from Cyclops. 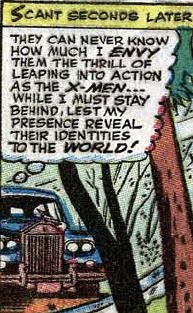 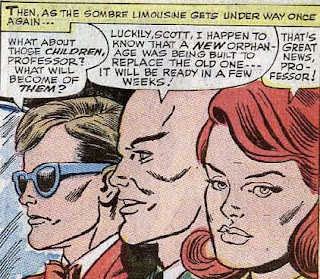 Professor X has installed...metal tentacles....as a safety measure, in case his mechanical braces fail while on the stairs. 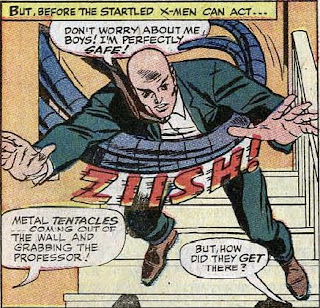 He then conveniently sidesteps any questions regarding how, exactly, the braces work. 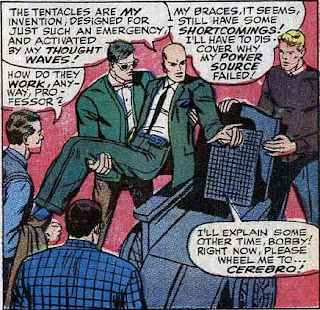 El Tigre tells one his henchmen to hide his machete, so as to not draw attention to themselves. Despite the fact they are dressed like Latin American caricatures. 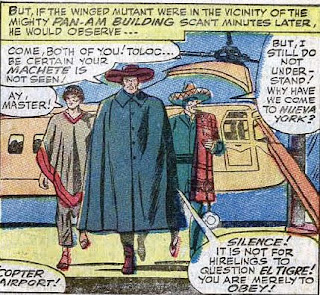 Build up your Vocabulary with Beast: Perspicacious
\ˌpər-spə-ˈkā-shəs\ Adjective. Of acute mental vision or discernment.

as in, "how perspicacious of you, Bobby, my lad. 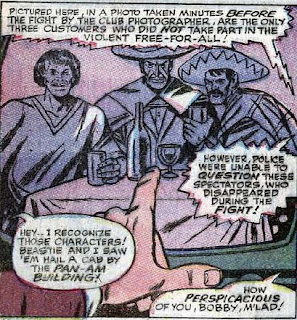 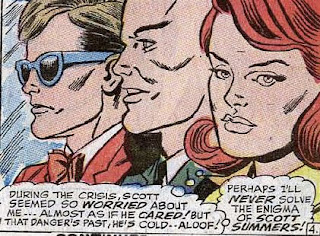 Creepy Ted's back at it, the moment Jean returns to campus. 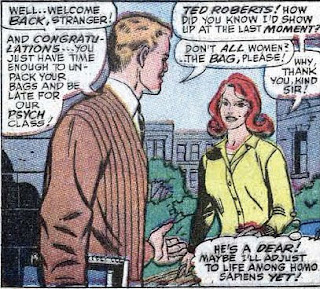 Angel, meanwhile, has given up on Jean and decided it's time to get pimpin'. 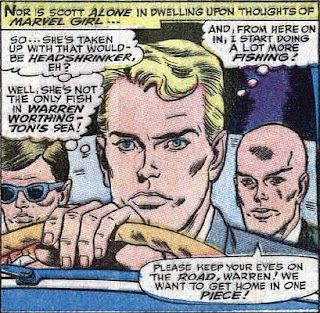 Human/Mutant Relations: Scott's glasses accidentally fall off. Time for a mob to form! 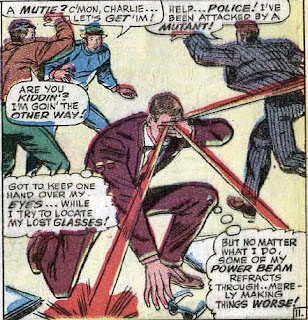 The Awesome and Terrible Power of Cyclops: See above. Also, Scott is still thinking of leaving the X-Men in order to get Jean out of his head. 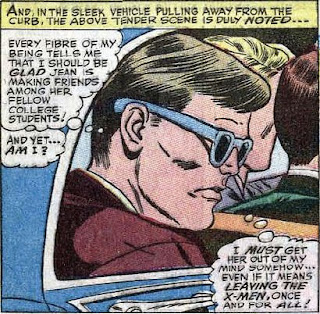 For Sale: The first batch of Marvel cartoons (the ones that were little more than crudely animated panels cut from existing comics, but also gave us those catchy theme songs like "Spider-Man, Spider-Man does whatever a spider can..." and "When Captain America throws his might shield...") are advertised throughout this issue, most notably via this full page ad: 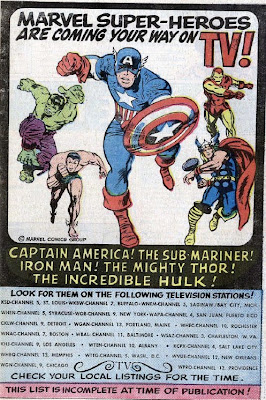 It's in the Mail: Is the Bible Marvel's biggest fan?

Teebore's Take: Anyone surprised that the X-Men were defeated by El Tigre because they split up and were taken out one by one go to the back of the class: you haven't been paying attention. While the use of Mayan mythology is interesting and unique (for all the plumbing of Norse, Greek and Egyptian mythology Marvel has done through the years, the mythology of the various Latin American cultures has gone largely untouched), there is nothing about El Tigre or this story that makes it a uniquely "X-Men" story; El Tigre isn't a mutant and there isn't anything about his lust for power that sets him apart from any other villain of the time.

As such (racial footnote aside), El Tigre is as forgettable as the Locust was last issue, and at least the Locust was fun in an over-the-top, campy way. Apart from the last few pages (in which El Tigre's pendant sets the museum to attacking the X-Men in a scene that plays like "Night at the Museum" without Robin Williams or Ben Stiller-so, you know, better), this is your bog standard Silver Age story.
Newer Post Older Post Home
Posted by Austin Gorton at 4:30 PM