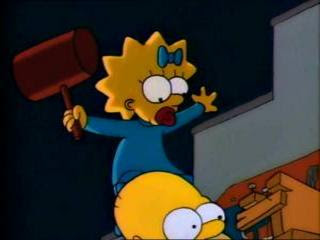 Or the One Where: Marge crusades against cartoon violence.

The Setup: After Maggie, inspired by an Itchy and Scratchy cartoon, hits Homer in the head with a mallet, Marge launches a crusade against the show, believing it is too violent and a bad influence on children.

A Work in Progress: This episode is the first appearance of Roger Meyers Jr., head of the Itchy and Scratchy cartoon studio.

Sideshow Mel also appears for the first time, though he won't have any lines until next season.

Marge: You won't be watching these cartoons any more. Ever.
Lisa: But Mom, if you take our cartoons away, we'll grow up without a sense of humor and be robots.
Bart: Really? What kind of robots?

Meyers: I did a little research and I discovered a startling thing...There was violence in the past, long before cartoons were invented.
Kent: I see. Fascinating.
Meyers: Yeah, and know something, Kent? The Crusades, for instance.Tremendous violence, many people killed, the darned thing went on for thirty years.
Kent: And this was before cartoons were invented?
Meyers: That's right, Kent.

Helen: You've got to lead our protest against this abomination!
Marge: Mm, but that's Michelangelo's David. It's a masterpiece.
Helen: It's filth! It graphically portrays parts of the human body, which, practical as they may be, are evil.
Marge: But I like that statue.
Helen: I told you she was soft on full frontal nudity! Come on, girls... 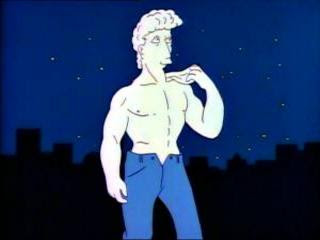 Teebore's Take: This is one the first real "message" episodes of "The Simpsons" and, appropriately enough, it's satirizing TV censorship. It's also one of the best "message" episode, in large part because the message is dealt with very even-evenhandedly. It's also ostensibly a "Marge" episode, and good Marge episodes are even more rare. The finale, in which Marge refuses to support a ban on the statue of David, helps reiterate that Marge is no zealot, and that her crusade against cartoon violence was born of her real belief that it was negatively affecting children. In the end, the episode presents a debate, rather than a statement, on the nature of television violence and political censorship, and the audience is left thinking, with neither side explicitly shown to be right or wrong.

"The Simpsons" dives head first into full-fledged social commentary by taking on TV censorship, crafting one of the best "message" episodes in the process, as well as providing a solid showcase for Marge. 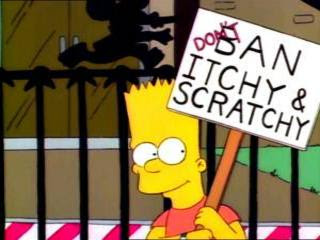