Retro Review: Bart Gets Hit by a Car 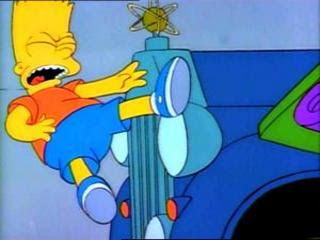 Or The One Where: Homer hires Lionel Hutz and files a lawsuit against Mr. Burns after his boss accidentally hits Bart with his car.


The Setup: Bart is skateboarding through town when Mr. Burns hits him with his car.

A Work In Progress: This episode is the first appearance of infamous lawyer Lionel Hutz, voiced by Phil Hartman, as well as Dr. Nick Rivera (though without his trademark "Hi, everybody/Hi, Dr. Nick!" schtick) and the Blue Haired Lawyer often employed by Mr. Burns. The Devil also appears on "The Simpsons" for the first time.

Fun Fact: After being struck by Mr. Burns' car, Bart finds himself in Hell. The Devil tells Bart he's "not due to arrive until the Yankees win the pennant. That's nearly a century from now." This episode originally aired in 1991, during an uncharacteristically-long championship dry spell for the Yankees. In 1990, they finished the season with the worst record in the American League. However, the Devil's "nearly a century" estimate proved to be a bit off: the Yankees won the American League pennant (and the World Series) in 1996, and won the pennant again in four consecutive seasons (1998-2001), as well as the World Series in 1998, 1999 and 2000.

Lisa: Excuse me, Mr. Hutz. Are you a shyster?
Hutz: How does a nice little girl like you know a big word like that?

Bart: It was a beautiful Sunday afternoon. I was playing in my wholesome childlike way, little realizing that I was about to be struck down by the Luxury Car of Death. 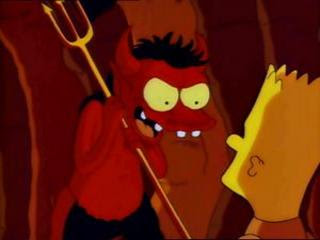 Teebore's Take: Back in the long, long ago, in the time before DVDs when I videotaped "Simpsons" episodes so I could watch them again and again, this is one of a handful of episodes I somehow managed to never get on tape. I wasn't missing much, as "Bart Gets Hit by a Car" is a standard season two episode: funny, with a standard sitcom plot (courtroom antics) and the hint of a moral (Marge destroys Homer and Lionel Hutz's fabricated case when she refuses to lie in court). Highlights of the episode include the introduction of Lionel Hutz, one of Phil Hartman's two great characters on the show (and my favorite of the pair), the dueling narratives of the car accident as presented by Bart and Mr. Burns, and Bart's unconscious journey through Heaven and Hell, culminating in his first meeting with the Devil.

A solid if unspectacular episode that gains extra points for the introduction of classic supporting character Lionel Hutz.