With Halloween just around the corner and twenty Simpsons Halloween specials in the bag (giving us sixty stories total!), let's take a look at my ten favorite Treehouse of Horror stories of all time. 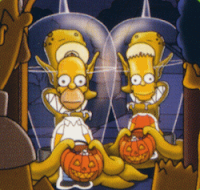 10. The Raven (Treehouse of Horror I, season 2)
In which James Earl Jones narrates Edgar Allen Poe's classic poem with Bart cast as the Raven. What it lacks in humor it makes for up in artsy-ness, tone and mood.

Bart: Lisa, that wasn't scary, not even for a poem.
Lisa: Well, it was written in 1845. Maybe people were easier to scare back then.
Bart: Oh, yeah. Like when you look at Friday the 13th, part one. It's pretty tame by today's standards 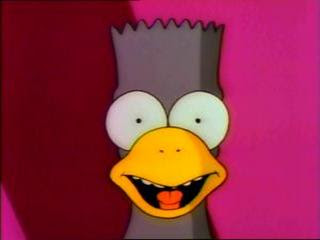 In which Marge is revealed to be a witch in 1600s Sprynge-Fielde. Suitably Halloween-y (with its use of witches and an origin for trick-or-treating) and hilarious (in a "funny cuz it's true" kind of way) in its depictions of witch hunts, literally and figuratively.

Quimby: Everyone, let us not turn into an angry mob! Goodie-Simpson is entitled to due process!
Wiggum: OK, here's how the process works. You sit on the broom and we shove you off the cliff.
Marge: What?!
Wiggum: Well, hear me out: if you're innocent, you will fall to an honorable Christian death. If you are, however, the bride of Satan, you will surely fly your broom to safety. At that point you will report back here for torture and beheading.
Skinner: Tough, but fair. 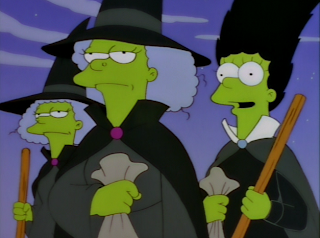 8. Night of the Dolphin (Treehouse of Horro XI, season 12)

In which Lisa frees Snorky, the Dolphin King, who leads his people in a bloody attack on Springfield, driving its denizens into the sea. So absurdly ridiculous and over-the-top it's funny, with allusions to everything from "Night of the Living Dead" to "The Birds" to "Jaws". 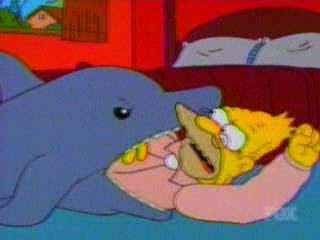 In which Kang and Kodos takes the form of then-Presidential candidates Bill Clinton and Bob Dole in order to take over the world. Although this is more of an election spoof than a Halloween one, it's entirely too funny and too spot-on in its satire of elections to not make the list. The "abortions for some, miniature American flags for others" bit alone accounts for its spot on this list.

Homer: America, take a good look at your beloved candidates. They're nothing but hideous space reptiles.
Kodos: It's true, we are aliens. But what are you going to do about it? It's a two-party system; you have to vote for one of us.
Man #1: He's right, this is a two-party system.
Man #2: Well, I believe I'll vote for a third-party candidate.
Kang: Go ahead, throw your vote away. 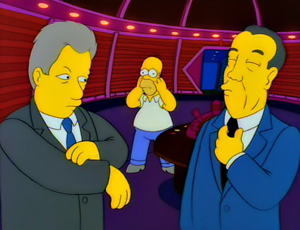 In which Bart inadvertently raises the dead, and the Simpsons must fight through a hoard of brain-seeking zombies to set things right. The "Treehouse of Horror" specials have returned to the zombie well several times (including season nine's "The Homega Man", season fourteen's "The Fright to Creep and Scare Harms" and the "28 Days Later" spoof in the most recent Halloween episode) but this first dip (also the first of the three "Treehouse of Horror III" segments to make this list) remains the best, highlighted by Homer shotgunning his way through some of history's greatest figures. And of course for:

Bart: Dad, you killed the Zombie Flanders!
Homer: He was a Zombie!? 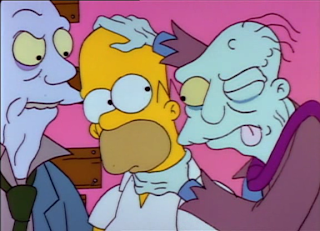 In which Grampa retells the story of "King Kong" with Homer in the title role. A spot-on adaptation of the King Kong story that still manages to average a laugh a minute, and a fine Halloween turn for Mr. Burns, rivaled only by his role in the next story. 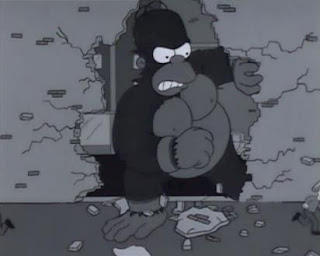 In which a "Bram Stoker's Dracula"-esque Mr. Burns transforms Bart into a vampire, prompting the rest of the family to try and kill Mr. Burns in order to restore Bart to normal. While not the best Treehouse story overall, this is probably the best synthesis of Halloween and humor, adapting a classic Halloween story and filling it to the brim with jokes. My favorite gag is the super fun happy slide, which lures Bart, unable to resist, to his death, and later similarly entrances his father.

Kent Brockman: Another local peasant has been found dead -- drained of his blood with two teeth marks on his throat. This black cape was found on the scene. Police are baffled.
Chief Wiggum: We think we're dealing with a supernatural being, most likely a mummy. As a precaution, I've ordered the Egyptian wing of the Springfield museum destroyed. 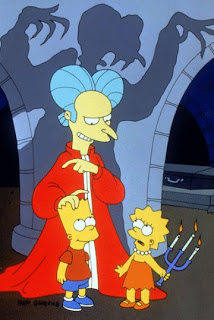 In which Homer buys Bart a talking Krusty doll that comes to life and tries to kill Homer. My favorite of the excellent third Treehouse special, like "King Homer" this segment is packed full of funny lines, sight gags and pop-culture references, including Homer's re-appropriation of the Oscar Mayer song ("My bologna has a first name, it's H-O-M-E-R...") and the classic Frogurt bit. 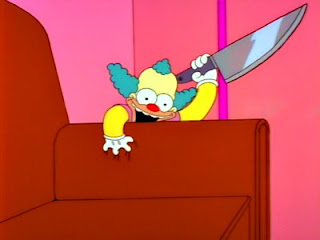 2. The Devil and Homer Simpson (Treehouse of Horror IV, season 5)

In which Homer sells his soul to the devil for a doughnut, and Marge uses some legally trickery to save him from damnation. From the inspired portrayal of the devil as Flanders ("it's always the one you least expect!") to a hilarious turn for the more-incompetent-than-usual and always funny Lionel Hutz, to the jury of the damned and Homer's time in Hell, this is a brilliant story that just barely lost the top spot on this list.

Blackbeard: 'Tis some kind of treasure map.
Benedict Arnold: You idiot, you can't read!
Blackbeard: Aye, 'tis true. My debauchery was my way of compensating. 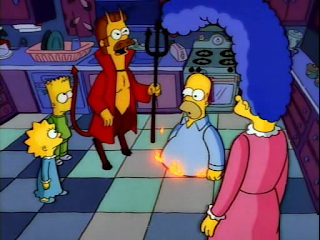 In which the Simpsons become the winter caretakers of Mr. Burns' remote mountain resort and a lack of TV and beer makes Homer...something something. I tried to avoid placing this one at #1. I mean, EVERYBODY loves this one, it tops all the lists of "best Simpsons Halloween stories" and it's the one most people think of when they think "Simpsons" and "Halloween". But there's a reason everyone loves it, and a reason it tops all those lists: it really IS that good. It manages to effectively adapt "The Shining" in less than ten minutes yet at the same time, EVERY line is either a joke or a setup for a joke. As a result, it is the quintessential "Treehouse" story, and I can't resist declaring it my personal favorite. 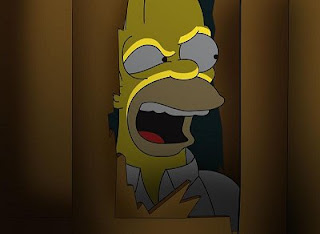