Retro Review: The Way We Was 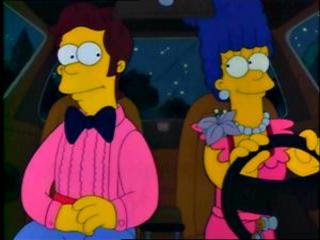 Or the One Where: Homer and Marge tell the story of how they met in high school and fell in love.

The Setup: The TV breaks down, prompting Homer and Marge to tell the kids a tale from their past to pass the time.

A Work in Progress: This is the first "flashback" episode, the start of a recurring series of episodes that will also show us Homer and Marge's wedding, Lisa's first word and the birth of Maggie, amongst other stories.

Jon Lovitz makes his Simpsons debut as Marge's prom date Artie Ziff. Artie will return again, as will Lovitz, who will lend his voice to a handful of characters through the years.

This episode contains the first appearance of the "McBain" films and their titular star (and Arnold Schwarzenegger-parody) Rainer Wolfcastle, in a segment at the beginning of the episode which parodies the "Siskel and Ebert and the Movies" show.

Homer's prom night chauffeur in this episode marks the first appearance of the character known as "Wiseguy" or "the Sarcastic Middle-Aged Man" , voiced by Hank Azaria in a Charles Bronson impression. He pops up working a variety of jobs throughout the years, whenever the script calls for the "wiseguy voice".

Principal Dondelinger and Marge's rarely-seen father also appear for the first time (Marge's father is noticeably different from his later appearance as a flight attendant in "Marge's Fear of Flying").

Grampa: Now, this girlfriend of yours, is she a real looker?
Homer: Uh huh.
Grampa: A lot on the ball?
Homer: Yeah.
Grampa: Oh, Son, don't overreach! Go for the DENTED car, the DEAD-END job, the LESS ATTRACTIVE girl. Oh, I blame myself. I should've had this talk a long time ago.

Guidance Counselor: Do you have any plans for after graduation?
Homer: Me? I'm gonna drink a lot of beer and stay out aaall night!

Selma: Marge's dates get homelier all the time.
Patty: That's what you get when you don't put out. 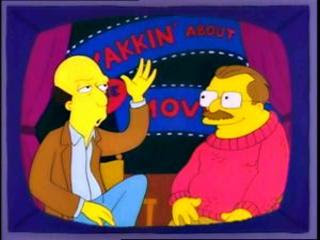 Teebore's Take: This isn't my favorite of the "flashback" episodes ("Maggie Makes Three" probably holds that honor at the moment) but it is a phenomenal episode nonetheless. Funny, sweet, charming, and it does a lot to flesh out Homer and Marge's characters. It is also a rare Homer/Marge episode that doesn't revolve around problems in their marriage. Toss in the first of several hilarious Jon Lovitz characters (the clueless and egotistical Artie Ziff) and this becomes one of the standout episodes of the season.

The first flashback episode, the first of many great Jon Lovitz characters, the introduction of McBain, and a funny, touching episode to boot. 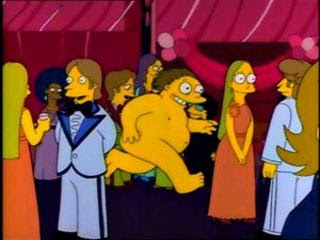