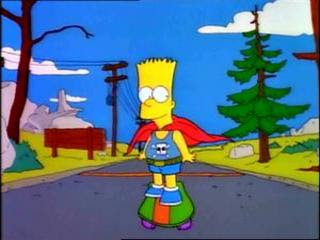 Or the One Where: Bart attempts to jump Springfield Gorge on his skate board.

The Setup: After seeing daredevil Lance Murdock at the monster truck rally, Bart is inspired to become a daredevil.

A Work in Progress: Dr. Hibbert appears for the first time. His character was originally intended to be a woman, but when the show was placed in direct competition with "The Cosby Show" in the second season the writers decided to make him a parody of Cliff Huxtable.

Lewis: Oh no, he's hurt.
Richard: Bad.
Milhouse: Let's get out of here!

Marge: Gee, I never realized TV was such a dangerous influence.
Dr. Hibbert: Well, as tragic as all this is, it's a small price to pay for countless hours of top-notch entertainment.
Homer: Amen!

Lance Murdock: Now let me start by saying... Good for you son! It's always good to see young people taking an interest in danger. Now a lot of people are going to be telling you you're crazy, and maybe they're right. But the fact of the matter is: Bones heal. Chicks dig scars. And the United States of America has the best doctor-to-daredevil ratio in the world! 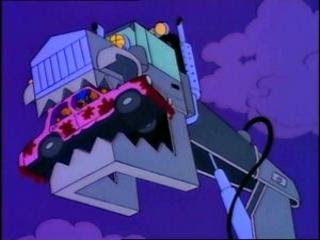 Teebore's Take: "Simpsons" creator Matt Groening has said this is his favorite episode. It's not my favorite, but it's definitely a good one, striking the right balance between character, plot and humor. Of course, everyone remembers this episode for the sequence at the end in which Homer twice plummets down Springfield Gorge (because the ambulance he's loaded into after falling down once crashes into a tree and his gurney rolls back into the gorge). That sequence marks the show's biggest departure from "reality" thus far, and is a sign of the complete surreality that will consume the show in years to come. That said, it remains pretty damn funny.

A perfect blend of character and humor that strikes the right balance between the genuine and the surreal. The gorge sequence alone, one of the most well-known and repeated scenes in "The Simpsons" history, makes this one a classic. 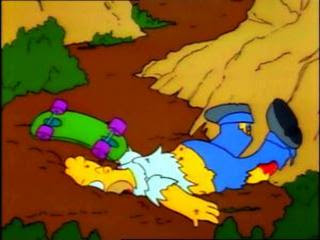