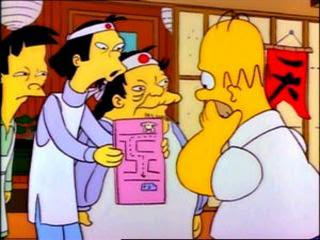 Or the One Where: Homer thinks he's dying after eating poisoned blow fish.

The Setup: Desperate for a change in their dinner routine, Lisa convinces the family to try the new sushi restaurant, which Homer loves so much he eats everything on the menu, including accidentally-poisonous blow fish.

A Work in Progress: Akira, the sushi chef voiced by George Takei, appears for the first time. He'll pop up now and then (notably as Bart's karate teacher in "When Flanders Failed") but is more or less a background character.

This is the first time the "Homer says no, Bart and/or Lisa says "please Dad" over and over until he gives in" bit is used.

Fun Fact: When the Fox censors balked at Bart and Lisa singing the theme from "Shaft" in the sushi restaurant's karaoke bar, believing the lyrics weren't appropriate for TV, the writing staff dug up footage of Isaac Hayes performing the song during a telecast of the Oscars. 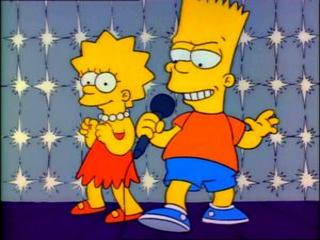 Hostess: This is our karaoke bar. Now it is empty, but soon it will be hopping with drunken Japanese businessmen

Homer: I want to share something with you: the three little sentences that will get you through life.
#1: Cover for me.
#2: Oh, good idea, Boss!
#3: It was like that when I got here.

Homer: Goodbye, Maggie. Stay as sweet as you are. Goodbye, Lisa. I know you'll make me proud. Goodbye, Bart. ... I like your sheets. Teebore's Take: An episode that masterfully walks the fine line between humor and emotion. It's not too sappy, yet at the same time Homer's reaction to his apparent mortality is effective and moving (the way items on his "to do before I die" list keep getting circumvented is a great example). This is another episode that must not get rerun very often, as it never got properly recorded and added to my videotape collection back in the day. Also, in my senior year of high school a friend and I wrote a speech which used Homer's three lines of advice to Bart in this episode as a framework for tackling post-high school life. We submitted it for consideration as the speech to be read at graduation, but lost to a speech that used eagles as a metaphor for post-high school life (our school mascot was an eagle...). Finally, the scene in which Homer teaches Bart how to shave also taught me how to shave.

A fine example of "The Simpsons" ability to strike the right balance between satire and sentiment. 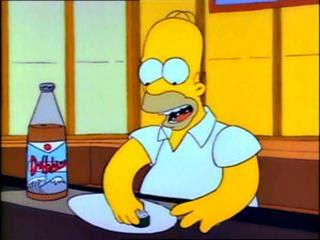