Or The One Where: Marge falls for Jacques, a sleazy bowling instructor.

The Setup: Homer buys Marge a bowling ball fit for his hand, with his name engraved on it, for her birthday. Incensed by his selfishness, Marge decides to use the ball herself.

A Work in Progress: Helen Lovejoy, Reverend Lovejoy's wife, appears for the first time, as does Lenny.

Jacques, the bowling instructor voiced by Albert Brooks, makes his first, and aside from a few later background appearances, only appearance.

This episode is considered a favorite by many, and won a Primetime Emmy Award for Outstanding Animated Program (for Programming Less than One Hour), the first for "The Simpsons." Matt Groening ranks it as his second favorite episode of all time. It's a good episode, but I don't hold it in the same esteem as Mr. Groening.

Marge: What's Brunch?
Jacques: You'd love it, It's not quite breakfast, it's not quite lunch, but it comes with a slice of cantaloupe at the end. You don't get completely what you would at breakfast, but you get a good meal!

Marge: You certainly have a lot of bowling trophies.
Jacques: Ha ha...they're not for bowling Marge. You're so naive, they're for lovemaking!

Jacques: To the most beautiful moment in life, Better than a deed, better than a memory, the moment... of anticipation! 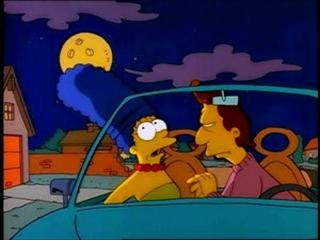 Teebore's Take: Though not as comical nor as surreal as the later examples it inspired, this episode is, in many ways, the first of the now-numerous "Homer and Marge have relationship problems" episodes. As such, it's the first episode to focus primarily on Homer and Marge's relationship, relegating the kids to the background for an episode. Homer forgetting Marge's birthday and giving her gifts he intends for himself is standard sitcom fare, but his gift of a bowling ball engraved with his name, and Marge's subsequent determination to use the ball herself puts a "Simpsons" edge on the proceedings. This is also one of the first episodes to use the device of having a plot thread in the first act that exists only as a lead-in to the main plot of the episode, a device that will become the standard as the show continues. 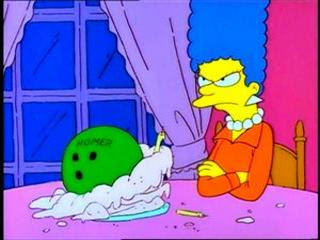 No major new characters are introduced, but this is remains a highlight of the first season while serving as the first examination of Homer and Marge's relationship.
Newer Post Older Post Home
Posted by Austin Gorton at 4:43 PM