Retro Review: Call of the Simpsons 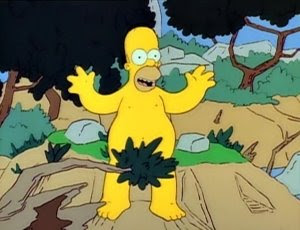 Or The One Where: The Simpsons get lost in the woods and Homer is mistaken for Bigfoot.

The Setup: Jealous of Flander's luxury RV, Homer buys a rundown model, which he proceeds to promptly drive over a cliff, stranding the family in the wilderness.

A Work in Progress: Al Brooks voices Bob, of Bob's RVs, making this the first episode of many, including "The Simpsons Movie", for which Mr. Brooks will provide his voice talent.

Homer: Is that a good siren? Am I approved?
Bob: You ever known a siren to be good? No Mr. Simpson, it's not. It's a bad siren. That's the computer in case I went blind telling me, 'sell the vehicle to this fella and you're out of business!' That's what the siren says. It seems the Ultimate Behemoth is a wee bit out of your price range, and 'wee bit' is me being polite. You couldn't afford this thing if you lived to be a million.

Marge: Homer, I'm telling you, this is not the Interstate.
Homer: Pffffft. Maps.

Lisa: Remember, Dad: the handle of the Big Dipper points towards the North Star.
Homer: Heh heh, that's nice, Lisa. But we're not in astronomy class. We're in the woods. 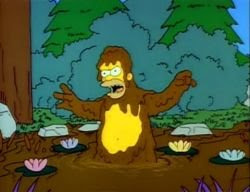 Teebore's Take: This is one of my first-season favorites, nothing groundbreaking but solidly funny throughout, with the right balance of sitcom humor and zany antics. I particularly enjoy the gag where Homer sets a trap for an animal, only to have the trap fling the animal miles away through the air. Of course, highlight of the episode involves Maggie being befriended by a pack of benevolent bears who still bottles of milk for her and allow her to ride on their backs.

One of the first solid, all around funny episodes.
Newer Post Older Post Home
Posted by Austin Gorton at 4:13 PM