Retro Review: The Crepes of Wrath

Or the One Where: Bart goes to France.

The Setup: Forced to clean his room, Bart discovers an unused cherry bomb he later inadvertently uses on Principal Skinner's mother. Fed up with his antics, Skinner approaches Homer and Marge with the option of deportation.

A Work in Progress: Principal Skinner's mother Agnes appears for the first time, though it will be awhile before she's given a first name and her acerbic personality. In this, she's simply a kindly old lady who refers to Skinner as "Spanky."

Skinner: You wouldn't be getting a French boy, you'd be getting an Albanian.
Homer: You mean, all white with pink eyes?

Skinner: You might find his accent peculiar. Certain aspects of his culture may seem absurd, perhaps even offensive. But I urge you all to give little Adil the benefit of the doubt. This way, and only in this way, do we hope to better understand our backward neighbors throughout the world.

Adil: How can you defend a country where five percent of the people control ninety-five percent of the wealth?
Lisa: I'm defending a country where people can think and act and worship any way they want. Adil: Cannot!
Lisa: Can too!
Adil: Cannot!
Lisa: Can too!
Homer: Please, please, kids, stop fighting. Maybe Lisa's right about America being the land of opportunity, and maybe Adil's got a point about the machinery of capitalism being oiled with the blood of the workers. 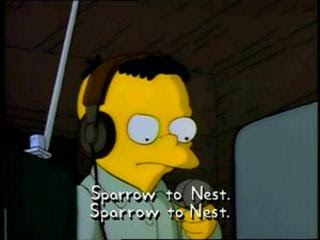 Teebore's Take: Another first-season favorite of mine, this episode is notable for being the first of many plots centered around the idea of one character or the family visiting another place or country. The setup for Bart's trip to France is, like most of the first season, much more realistic and reasoned than some of the later excuses for trips to foreign lands (I'm thinking particularly of the "Simpsons go to Africa" episode). Also, this episode is the first time "The Simpsons" goes out of its way to mock another culture for laughs, in this case, the French. Combine all that with the contrast between Bart and Adil (the Albanian student the Simpsons host in Bart's absence)'s separate experiences and Homer's complete cluelessness regarding Adil's Communist mission (a plot that strikes the right note of zany for this episode), and this episode is a winner.

The first "the Simpsons go to ____!" episode, the first time "The Simpsons" satirizes another culture, and funny to boot: definitely an all time classic. 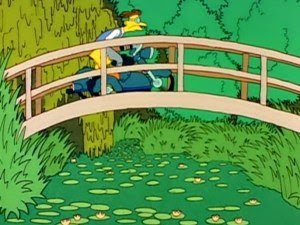