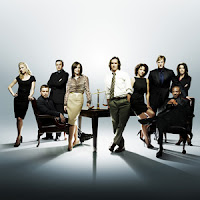 If you've watched any cable TV in the last few months, you are probably overly aware of the fact that God himself is bringing to TNT the greatest work of His creative genius since the Old Testament. Writing under the pseudonym "Steven Bochco," used in the past when creating such heavenly shows as LA Law and NYPD Blue, God unveiled this reputed masterpiece Monday night in the form of the commercial-free premiere of the new legal drama Raising the Bar.

Raising the Bar is a show about lawyers working in various factions of the New York City judicial system. Zack Morris (Mark Paul Gosselaar), who must have ended up going pre-Law at Cal U, is the main character, a public defender who appears to be wearing the skin of a muskrat on his

head (sadly, Kelly Kapowski is nowhere to be seen). Zack is short-tempered and beaten down by the weight of a system that seems to consistently deny his clients justice. Because his client are INNOCENT DAMN IT! He believes in the system, but not the way his nemesis, Judge Malcolm's Mom (Jane Kaczmarek), chooses to intrepret it. Zack's best friend (Jonathan Scarfe) is a clerk in Judge Malcolm's Mom's office. He appears to have her wrapped around his finger. This is because he grossly sexes her up, it seems, despite the fact that he hangs out in a type of dance club that I assume is supposed to suggest he's secretly gay.

Across the aisle from Zack is Gunn (J. August Richards), who apparently escaped the apocalypse in LA and parlayed his experience as head of the Wolfram and Hart legal department into a job as some kind of District Attorney. Also working as a prosecutor in the DA's office is a

not-unattractive blond woman named Michelle (Melissa Sagemiller) who, according to one line of dialogue, has a professional rivalry with Zack, despite the fact when facing off against him in court, she spends most of the episode agreeing with him that his client is ABSOLUTELY INNOCENT WITHOUT A DOUBT. These four individuals, as well as Zack's boss who used to work at the hospital in ER (Gloria Reuben), and a public defender who gets teased for being rich whose name I honestly don't remember, are all friends according to one scene at a bar (the kind with booze, not the legal one). They apparently went through law school together and are determined to remain friends despite jobs that put them into professional conflict with one another and the fact that Zack's clients are INNOCENT DAMN IT AND ARE GETTING SCREWED OVER BY JUDGE MALCOLM'S MOM AND NO ONE ELSE, NOT EVEN HIS FRIENDS, SEEM TO CARE.

The point of a show's pilot episode is to establish the main characters and themes within one episode and entice the viewer to come back for more; this pilot fails to do so on both counts. Aside from the fact that Zack is loose cannon who isn't afraid to mouth off to judges because he loves his clients SO MUCH and that Judge Malcolm's Mom is a bitch, everything else was muddled and unclear. The lawyers are all friends despite being professional opponents; this in and of itself is an interesting hook to hang a lawyer show on, but the execution fails to make much of this idea.

Instead, time is spent on inexplicable scenes, such as when Michelle is being sexually harassed by her boss, who makes a point of citing legal precedent to establish that what he's doing can't legally be considered harassment. She responds to his "harassment" by faking sexual advances towards him in order to...teach him some kind of lesson...I guess...? Perhaps this scene was meant to evoke the "provocative" storytelling the creator of NYPD Blue is known for, but it just ended up being wasteful and confusing.

Similarly, the show ends (spoiler warning, I guess...) with Zack addressing a mysterious figure showering in his bathroom off camera. As the figure emerges and their identity revealed, we discover it is Michelle who is either Zack's friend or professional adversary (or both). Michelle, wet and towel-wrapped, proceeds to kiss him in a tentative way that suggests maybe they've never kissed before, even though she's showering in his bathroom. Or maybe they're just romantically involved and it's a secret from both their friends and their colleagues? Or...something?

That's the kind of muddled storytelling and confusing characterization on display in Raising the Bar, which unfortunately, barely manages to meet the standards of the genre, let alone raise them. But that's okay, because STEVEN BOCHCO has come to TNT, and that's all that really matters, right TNT? 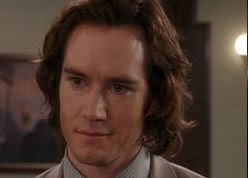