To Better Know A Hero: Hulk 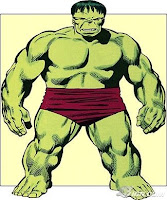 Powers and Abilities: Anger triggers the transformation of Banner into the Hulk, which gives him tremendous strength, which grows greater in proportion to his anger (the madder Hulk gets, the stronger Hulk gets), invulnerability, super-human durability and resiliency; the Hulk can also leap several miles, visibly detect astral projections, and intuitively know the spot in the desert where he was born.

Weaknesses and Achilles’ Heels: Hulk is his own greatest weakness: he is constantly at war with himself, the meek Banner trying to exert control over the explosive Hulk; Gamma radiation has been known to trigger the change back to Banner, or limit his abilities; complex thoughts 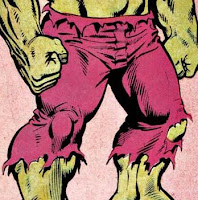 Friends and Allies: Rick Jones (his best friend and sidekick), Betty Ross Banner (his deceased wife) Leonard “Doc” Samson (his friend and psychiatrist), Amadeus Cho (his new sidekick), the Avengers (sometimes), the Defenders, the Pantheon, the Warbound, the Renegades 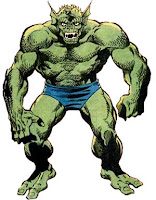 One-Sentence Origin: Brilliant but mild-mannered scientist Bruce Banner is caught in the explosion of an experimental Gamma bomb which transforms him into the incredible Hulk whenever he gets angry.

Memorable Moment: Secret Wars #4, August 1985. Trapped on an alien world, Marvel’s greatest heroes are under attack by the combined forces of their greatest enemies when Molecule Man drops a mountain on them. The Hulk single-handedly holds up the entire mountain long enough for Mr. Fantastic and Iron Man to cobble together a way out for all the heroes.

Fun Fact: Early in the Hulk’s series, Stan Lee mistakenly referred to Banner as Robert rather than Bruce (ol’ Stan has always claimed he’s no good at remembering names, and he had a lot to keep track of back then, when he was basically writing most of Marvel’s books-hence all the alliteration). He later covered the error by saying that Banner preferred to go by his middle name, Bruce. Allegedly, when the 1970s Hulk TV show starring Bill Bixby and Lou Feringno was being developed, the producers felt that “Bruce” wasn’t a masculine enough name, so they changed it to “David” (which some people I know will argue is the most masculine name, ever) for the show. 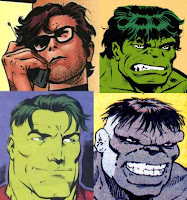 Teebore’s Take: If sixties Marvel tales can be read as parables about the worries of the Atomic Age, then the Incredible Hulk is the strongest of those, updating two stories written (Frankenstein and Dr. Jekyll and Mr. Hyde) as a reaction to Victorian-era fears of the Industrial Revolution to create a tale of a super-strong monster birthed by the science of man. The Hulk is also one of early Marvel’s most purely metaphoric characters.

Through the years the Hulk has gone through a number of mental and physical changes, settings, and status quos. The in-universe explanation for this has always been the volatile nature of the gamma radiation that made the Hulk; the real reason is the limitations of the Hulk’s original (and still default) storytelling engine, in which the Hulk was constantly hunted by the military while Bruce Banner did everything he could to stay out of trouble and find a cure. Of course, this was always a false status quo, because if Banner did find a cure, the story would be over, and if the military captured and exterminated the Hulk, the story would be over. So various writers had to come up with all kinds of ideas to keep the narrative going. This variety, along with the thematic resonance of the character, is a large part of the Hulk’s appeal to me, and I’d imagine, a lot of other people. After all, if you don’t like a particular take on the character, it’s only a matter of time before another one you do like comes along. 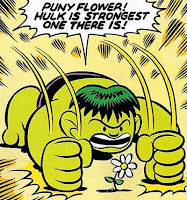 Over time, the Hulk’s intelligence has varied, from cunning to savage to child-like. He has gone through various periods where the Hulk possessed Banner’s intellect, and periods where the Hulk and Banner became two physically separate individuals. The Hulk has been everything from a wandering misanthrope, an unstoppable brute, a respected super-hero, and a force of nature. Gray in his first appearance, he was soon colored in the more familiar green hue (the apocryphal story goes that the printing process in the sixties was so poor the gray tones washed out, so they had to change to the more vibrant green).

In the eighties, the Hulk went back to gray for a time when a more surly personality emerged, and his transformations into a less powerful Hulk occurred every night rather than when enraged. Taking the name Joe Fix-It the Hulk worked for a time as a Vegas bouncer and mob bodyguard. Shortly thereafter, this personality was merged with Banner’s intellect and 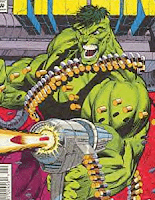 the raw power of the mindless Hulk to create a more balanced Hulk known as the “Professor Hulk.”Also, he used guns for some reason. But it was the 90s. Everyone was doing it.

More recently, the Hulk was launched into space by a group of well-meaning douchebags (Mr. Fantastic, Iron Man, Dr. Strange and Black Bolt) and mistakenly ended up on an alien world where he fought as a gladiator, overthrew the government, proclaimed himself king, and then, when the ship he arrived in exploded, killing his new wife and many of his subjects, journeyed back to Earth to take revenge on those well-meaning douches for kicking him off the planet in the first place. It was pretty sweet.

Email ThisBlogThis!Share to TwitterShare to FacebookShare to Pinterest
Labels: comics, Hulk, To Better Know A Hero