"3 Questions About Comics and You" Meme

Here's another little meme that's been circulating around recently. I invite my fellow Gentlemen to answer as well, if they are so inclined.

What was the first comic you remember reading?

New Defenders 129, in which the New Defenders battle Professor X and the New Mutants (who were actually just mental illusions cast by the slightly whacky New Defender Moondragon.

I have no idea how this issue of a B-List (at best) comic that I had never heard of at the time came into my possession; it just showed up in the house one day. I remember reading it and having no clue who the New Defenders were (except for Iceman, due to his role as one of Spidey’s Amazing Friends) or who the New Mutants were (but I did know Professor X, thanks to the cartoons of the era).

I do recall that Moondragon made a pre-teen Teebore feel kinda funny, like when you slide down the rope in gym class… 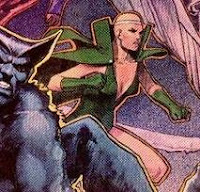 What was the first comic that made you realize that you might be in this for the long haul? X-Men #8 and Uncanny X-Men #289, the two issues on the stand when the baseball-cards-to –comic-book-cards transition inevitably led me to comic books themselves. I have no recollection why I picked up two X-Men books with which to test the waters, but I did, and had no freaking clue what was going. Rather than be turned off by the dense and seemingly impenetrable continuity contained therein (the effect that many critics believe the similarly continuity-obsessed super hero comics of today have on new readers) I was captivated by it, and realized the door had opened on a rich and new mythology that I could learn, study and devour. From that point forward, as I did just that, I was hooked.

If you had to make a snap decision to take one comic or one comic run to a desert island, what would it be? Don’t think too hard!

My first instinct is to take the Official Handbook of the Marvel Universe series with me, because that would be like having a whole ton of stories on hand.

Otherwise, probably X-Men 194 -137 (the Claremont/Cockrum and Claremont/Byrne runs). It's not my favorite run, but the one with enough variety to keep me interested whilst exiled.