THE GREATEST COMIC BOOK SERIES EVER 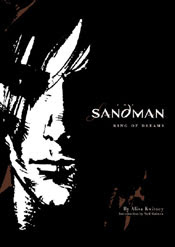 “I will show you terror in a handful of dust.”

- -quote inspired by T.S. Eliot, used in promotional material for THE SANDMAN.

Any graphic novel afficionado will tell you THE SANDMAN by Neil Gaiman is one of the most innovative and remarkable comic book series of all time. This post is not for them, though. It is for the person who appreciates exceptional art and true emotion, realistic personalities and intelligence, vivid dreams and transcendent stories yet would never think such things could be found in the pages of a “children’s” medium. 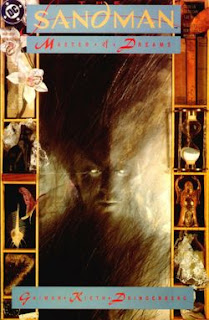 Comic books have been dismissed as worthless fodder since their modern day inception. When the subject is raised some people think Archie & Jughead, Batman played by Adam West going BANG, POW, ZOING!, or the X-men as violent metaphors for various groups of social outsiders.

As with any generalization this dismissal is drastically proven wrong especially in the case of THE SANDMAN series.

THE SANDMAN was a monthly comic written by Screenwriter and New York Times best selling author Neil Gaiman and published from December 1988 to March 1996. The series revolved around the Lord of Dreams, Morpheus (Not the MATRIX dude with the pills) who even though god-like, experiences the same trials and tribulations we all endure.

Morpheus, aka DREAM, is a personification of dreams who presides over his realm with efficiency and stubbornness. His realm is where we go while we sleep but the series flows out of our nightly fantasies into the real world, following historical figures such as Shakespeare, mythological beings like Thor and Titania, Queen of the Faerie Folk, and modern day characters such as Rose Walker, a young woman trying to find her true self as well as her kidnapped brother. 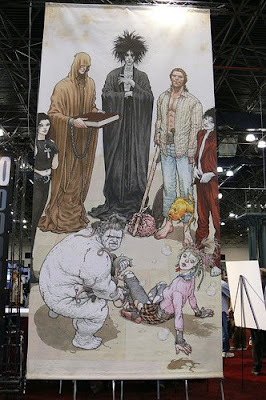 Dream is an elder member of his family of siblings who all reside over their respective realms. DESTINY is the oldest. He’s blind and wanderers his garden chained to a book containing everything that ever happened or will happen. 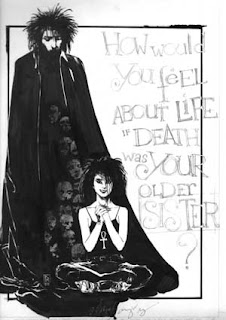 DEATH – Dreams older sister performs her function not as a grim reaper to be feared but as the perfect and lovable friend you feel like you’ve known throughout your entire life.

DESTRUCTION – Dream’s younger brother abandoned his realm and went out into the universe to try his hand at various art forms (creating rather than destroying). Dream is convinced to seek him out and finds just what anyone would who searches for DESTRUCTION.

DESIRE and DESPAIR are twins. Desire is everything you ever wanted. Despair is who you see when you look in a mirror when it seems as if all hope is lost. 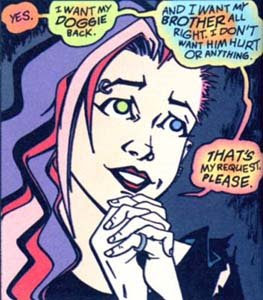 DELIRIUM is the youngest of the ENDLESS. She used to be delight but that was a long time ago. Delirium speaks the truth in seemingly random and obscure comments. She likes to create colorful butterflies and follows her fish.

THE SANDMAN is about stories and the connections we all share. From dreamscapes and the Gates of Hell we travel to a convention for serial killers, Shakespeare’s troop staging A MIDSUMMER NIGHT’S DREAM for residence of Faerie, the magical land of Baghdad from the Arabian Nights tales, and across modern day America on a road trip with Dream and his youngest sister, Delirium. These are some of the beautifully interlocking tales that weave through genres fluidly and unexpectedly. There are twists and turns and memorable quotes throughout the 8-year run of the series that affect the reader as only great works of art truly can.

Almost every girlfriend I’ve had has been given the trade paperbacks of the series to read and experience. Once they read a few stories, they were hooked.

The SANDMAN shaped my life and inspired me to create and aspire to be the type of writer Neil Gaiman became during the series. Since he ended the comic, Gaiman has gone on to become a successful novelist, Children’s book author, screenwriter, and was one of the first successful “bloggers”.

I adamantly beseech you all to seek out the collected trade paperbacks at either Barnes & Noble or another retail outlet that sells books. You will not be disappointed.
Newer Post Older Post Home
Posted by boots~ at 11:00 AM