Lost 4x01: The Beginning of the End 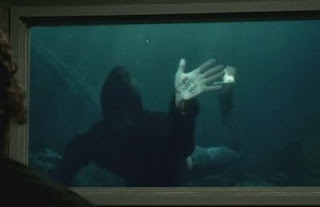 The season premiere of Lost exploded last Thursday onto a TV landscape rendered nearly barren of quality scripted television by the ongoing writers strike*and it was a welcome sight. It did a damned fine job of maintaining the energy of last season’s finale and setting up the direction and conflicts of this season. The Lostaways, split by Charlie’s posthumous message that their imminent rescuers were not what they had been led to believe, the group divided, with Jack leading a group back to the beach to await rescue, and Locke taking another group, including Hurley (after tearfully telling Claire that Charlie died), to hide in the abandoned barracks of the Others. Along the way, Jack and Kate meet the most recent “rescuer” to parachute onto the island, and it’s Cpl. Upham. If he still doesn’t know what FUBAR means, he will by the time he’s done with this island.
It appears that the division amongst the Lostaways will likely drive the main conflict of this season, in much the same way the conflict with the Others drove last season. Of course, the offshore “rescuers” have yet to be fully inserted into the mix, and it remains to be seen what effect they’ll have on the proceedings. The ramifications of the Lostaway Split and the rescue is reinforced by Hurley’s flash forward, in which we learn that apparently only 6 survivors of the crash were publicly rescued. Hurley, cheerfully ensconced once again in a mental hospital, receives three visitors that hint at the ominous nature of their rescue and post-island existence. The first is a creepy dude claiming to be a lawyer for Oceanic, asking if “they” are still alive. The second is Charlie, who insists to Hurley he is both dead and standing in front of him, who insists that “they” need him. The final is a pre-beard Jack (so this flash forward takes place before the one we saw last season)who is essentially making sure Hurley is still determined to keep their secret, whatever that may be. Hurley admits to Jack he never should have gone with Locke. Then we see a parallel to the dialogue between Jack and Kate in the finale, with Hurley insistent that leaving the island was bad and that they need to go back, and Jack insisting that’ll never happen. Just wait ‘til that beard starts eating your face, Jack. Then you’ll be singing a different tune.
Highlight
Ben, politely asking to join Locke’s group. “Jack, with your permission, I'd like to go with John.”
Did you notice?
When Charlie swam up to the glass in the interrogation room, he had “they need you” written on his hand.
The cop who interrogated Hurley did indeed know Ana-Lucia; he was her partner in her second season flashback episode “Collision”. I enjoyed his comments to Hurley about coincidence; they had a nice fourth wall-breaking, meta-textual ring to them.
While in the hospital, Hurley was seen drawing a picture of someone standing outside an igloo; perhaps a reference to the end of the second season, when two guys at a snow covered research station “found” the island for a brief moment? Also, the internet** pointed out the chalk board seen over Creepy Maybe-Lawyer’s shoulder as possibly containing some clues and/or other significances. It has pictures of sharks and palm trees and other such things on it.

Questions
These questions will obviously drive the whole season, if not the rest of the show: Why are there only six known survivors of the crash? Was everyone else left behind, or dead? Did others get off the island unknown to the public? If so, how and why? We can safely presume that Jack and Kate are part of the Oceanic 6 along with Hurley; who are the other three? If Claire and Aaron got rescued (as Desmond’s flash suggested) would Aaron count as one of the six, since he technically wasn’t on the Oceanic flight? Who are the “they” referenced by both Creepy Maybe Lawyer and Ghost Charlie? What secret are the six keeping and why do Hurley and Beard-o Jack want to go back?
Did Naomi really cover for the Lostaways, as Kate believes, or did she transmit some kind of message to her people before she died, either through the phone or her dying words? Does she have a sister?
Who was in Jacob’s cabin? Was that Locke’s eye (I think so)? Who was in the chair? Online buzz is speculating it was Jack’s dad Christian. John Terry was listed in the credits but didn’t seemingly didn’t appear anywhere else in the episode. It’s possible he had scenes that were cut, or was sitting in that chair when Hurley looked in. If that was Christian, does that mean he’s Jacob, or just that he was hanging in Jacob’s cabin (that sounds like a sitcom…)? Rumor even has it that you can tell the person in the chair has only one sneaker on (in the pilot episode, one white sneaker can be seen hanging from a branch). Perhaps Jacob can take the forms of dead people, and it’s him we see whenever dead people show up on the island. If so, didn’t Buffy already defeat him (props to Dr. Bitz for that one)?
How did Charlie appear before Hurley in the hospital? Was it just crazy Hurley (remember, Dave smacked him on the island too, and Hurley ultimately decided he was a figment of his imagination)? Was it Smokey or Jacob or whatever causes dead people to be seen on the island? Can the island’s “power” to make the dead appear reach that far?
Was Creepy Maybe-Lawyer actually a lawyer that worked for Oceanic? If so, will we be seeing more of Oceanic in the flash forwards? Perhaps they’re going to be set up as yet another mysterious corporation with hidden agendas, like the various Widmore companies, the Hanso Foundation, and Mittelos Bio Science.
I missed it in the episode, but the internet lists Desmond as having gone with Jack’s group-why? I understand he wants to be rescued as badly as the next Lostaway, but you’d think he’d be more cautious, especially since it’s his connection to Penny that gave the “rescuers” the benefit of the doubt and the one thing everyone now knows is that the ‘rescuers” used that connection to their benefit. Besides, Charlie died delivering that message in large part because Desmond’s flashes put him in the place for all that to happen. You’d think Desmond would follow Hurley and Claire’s lead in following Locke in memory of Charlie, however misguided that may turn out to be. I only bring this up because I’m a Desmond fan, and I hope it’ll be addressed at some point.
*Recent buzz has it that the strike is nearly over, with an agreement reached and nothing more than “i” dotting, “t” crossing, and a vote that is considered more or less a formality left before the writers can go back to work. Mum is the word as to when and how shows will return; each network will likely handle each show differently. Hopefully the Lost crew can get back to work in time to finish out this season.
**I should give a shout out to several fantastic Lost related sites: Nik at Nite, Billiedoux.com, DarkUFO. Anything I write here will be the tip of the iceberg compared to what’s out there online about Lost. These sites in particular are consistently well written, fun and point out many things I miss, stirring up a lot of Lost- related thoughts. Chances are, when I say “the internet” in a Lost post, I mean the posters or commentators on these sites. Seriously, check at the discussion at Nik at Nite about the letters H and O in this episode. Crazy stuff.
Newer Post Older Post Home
Posted by Austin Gorton at 8:55 PM