President Abraham Lincoln, born on this day in 1809, is best known for inventing the penny and the five dollar bill, single handedly obliterating the entire Confederate Army with his heat vision, having holographic simulations of himself go on destructive rampages, and encasing himself in marble to watch over the nation until he is needed to light our darkest hour. 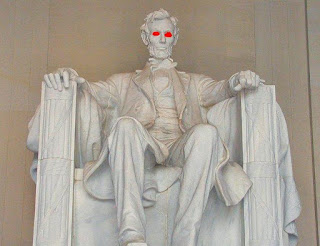 President Lincoln was the first president to have a beard while in office, a worthy precursor of such magnificently hirsute commanders-in-chiefs as Rutherford B. Hayes and Benjamin Harrison. 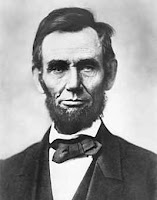 Lincoln was also the only president to obtain a patent (for a complicated device designed to lift ships over rocks or something like that; it was never put into widespread use) and the first president to be born in a state that wasn’t one of the thirteen original colonies (Kentucky).

Lincoln was known to take his dreams very seriously: the morning before he was assassinated he discussed a dream at a cabinet meeting, in which he saw himself sailing “in an indescribable vessel and moving rapidly toward an indistinct shore.” A week before he was killed, he had a dream in which he awoke to the sound of sobbing and followed it to the East Room of the White House. Inside he found a black draped casket and asked “Who is dead?” A military guard told him it was the President. So apparently, amongst his many other powers, President Lincoln had eerily prophetic dreams.

The coolest true story you’ll ever hear about Abraham Lincoln? In 1842 Lincoln was challenged to a duel by a state auditor, who was furious over a letter to the local paper Lincoln’s wife had written. Given the choice of weapons, as was the custom at the time, Lincoln chose broadswords, being accomplished as he was in the medieval arts (actually, because he was tall with long arms, thus giving him a large advantage when dueling with a frickin’ BROADSWORD, so Lincoln believed such a choice would likely scare off his opponent). Sure enough, the idea of facing off against a broadsword-wielding Lincoln was frightening enough for his opponent, and the challenger wisely decided to settle his differences with Lincoln without the duel. After all, there can be only one. 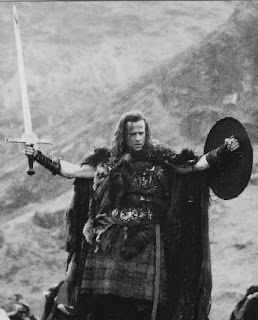