This episode tossed a lot of question-filled balls into the air, and introduced a lot of stuff that is likely to be pivotal moving forward. From Faraday’s discovery of some kind of time discrepancy to Ben’s mystery closet to the flash forward revelation that not only is Sayid one of the Oceanic 6 but also Ben’s hired gun to the shot of Sayid and Desmond flying off the island in the helicopter (Mrs. Teebore thinks we’ll never see those two characters on the island again, and I’m inclined to agree with her), this episode did a lot to move the story along. Locke and Company have reached the barracks and received Miles in exchange for Charlotte, and Kate to boot (it’s unclear if Kate is staying of her own volition or not, but I don’t know why Sayid would lie to Jack, unless it was to keep the peace and prevent Jack from storming off to rescue her). Jacob’s cabin wasn’t where it should be (Locke seemed confused but it seemed obvious to me that you can only go to Jacob’s cabin if you “believe” or are “special” so when Locke approached with a bunch of “not special unbelievers” the cabin remained hidden. But maybe I’m wrong). Sayid and Desmond left the island (complete with a beautiful tracking shot of the island itself). The flash forward showed us that Ben’s agenda could be even more far reaching than anyone thought.

Thus far the flash forwards have painted a picture of the Oceanic 6 as dissolute people fallen into self-destructive roles: Jack is a broken, drunk and addicted to painkillers, Hurley is back in the mental hospital, Sayid is once again ignoring his caring nature to harm people on the order of others. In fact, between these grim pictures and the portraits of incomplete, frustrated and broken people the flashbacks presented, it’s becoming even clearer that for many of the characters, they are at their best on the island (a notion given some voice by Sawyer’s conversation with Kate-but more on that later).

Sayid’s concern for Naomi in this episode was meant to establish a thematic parallel to the flash forward, showing us two women caught in the middle of a larger struggle, as well to reinforce the idea that at heart, Sayid is a good man who has been forced into doing bad things. Was Sayid’s concern for Naomi (reflecting on her bracelet, closing her eyes, bringing her on the copter) manufactured for this episode just to strengthen the parallel to Elsa and remind us of Sayid’s caring nature (since we have never seen Sayid express any extraordinary concern or feeling towards Naomi before this episode) or is there something more to it? It seemed out of place; usually the on island/off island themes are paralleled with more subtlety or less shoe-horning.

The talk of lists between Ben and Sayid reminded me once again of the Other’s/Jacob’s list. Is the list Future Ben is working off of compiled by the same still unknown criteria as the Jacob list? If so, then it seems that the Ben/Jacob/Others agenda (whatever that may be) is bigger than the island, which is reinforced by the discovery of Ben’s “traveling closet” and the implication that Ben is leaving the island to conduct business all over the world. Since the closet was hidden, we have to assume that these adventures are a further illustration of the fact that Ben has been less than honest with at least some of his Other followers when it comes to his true goals.

Finally, I was completely taken in by the Hurley ruse, and I think it worked so well because both the characters and the audience trust Hurley implicitly, and because Locke locking Hurley in a closet and abandoning him as punishment for Hurley second guessing him is something we all can totally see Locke doing at this point. 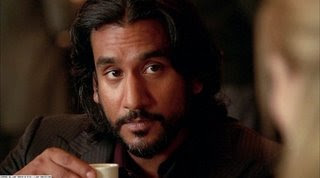 Highlight
Hurley, on Miles: “Oh. Awesome. The ship sent us another Sawyer.” Or Jack, after Kate says now he knows what it’s like to be left behind: “Does that mean I should wait twenty minutes and go anyway?”

Did You Notice?
Frank specifically told Sayid that if Sayid brought him Charlotte, Frank’d take him “off the island”; not to the freighter, but off the island. It may mean nothing, or perhaps we’ll find out Frank cheated as much as Sayid did in that arrangement.

Now that Miles is with Locke’s group, he and his ghostbusting abilities are in a better position to confront some of the islands biggest mysteries (the seemingly walking dead) and also find out about the purge (from the pile of dead Dharma bodies), which may become significant if any of this group turns out to be involved with Dharma in some way (as many are theorizing to be the case). 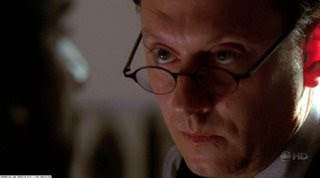 Questions
This is an older, ongoing one, but this episode brought it up, and then, frustratingly, didn’t answer it: why DOES Kate want to leave the island so badly? As the audience has been thinking and Sawyer FINALLY pointed out, she was jail bound before the crash. Obviously, we know from the flash forward that she wriggles out of that somehow, but she doesn’t know that yet. I mean, I can understand her not wanting to live out her life on an island, but a more “if it happens, great, if not, I’ll survive” attitude would make more sense, given her fugitive status, than the “do whatever it takes to get off the island” attitude she’s always had.

Who is the titular Economist? On most other shows, the fact that his identity remained unrevealed, I could let slide, but on this show, his identity has to be important.

I’m not even going to try to wrap my head around what Dan’s experiment could possibly mean, and simply point out that it seems to give further evidence that there is something screwy involving time and/or distance on the island, and say that I would like to learn more.

What was the deal with the bracelets? Naomi’s seemed to be personally inscribed, but then Elsa had one: was her bracelet the exact same one as Naomi’s, and Sayid gave it to her? Why? If it was a similar but different (different engraving or something) bracelet what was the point of the emphasis the camera put on it? Simply to emphasize the thematic parallels, or something more?

That ending barrages us with questions, including: Why is Sayid working for Ben? What is Ben’s goal? Is it a new one, or a continuation of what he and the Others were doing on the island? What exactly happened the last time “Sayid thought with his heart?” Why did they meet at an animal hospital? Has Ben always been able to perform the “field surgery” he administers to Sayid?

Where does Sayid’s flash forward fit in the flash forward timeline? I’m guessing after Hurley’s but before Jack’s, but that’s just a guess.

Where’s Nadia in the future? Is she how Ben is controlling Sayid, or a casualty of the last time Sayid “thought with his heart?”
Newer Post Older Post Home
Posted by Austin Gorton at 10:23 PM