Look, we all knew he was coming eventually, so we may as well get him out of the way. Honestly, I was determined to leave Mr. Burns off the list because, well, everybody loves Mr. Burns. But I can't ignore the fact that for a long time, Mr. Burns was my favorite character, and remains one of them. Sometimes, everybody gets it right.

Charles Montgomery Burns (voiced by Harry Shearer) is Springfield's resident megalomaniac. Whether running for Governor, cheating on public health inspections ("the watchdog of public safety: is there any lower form of life?") polluting the...well everything, stealing Christmas from 1981-1985 or blotting out the sun, there is nothing Burnsy won't do if its in his own best interests. 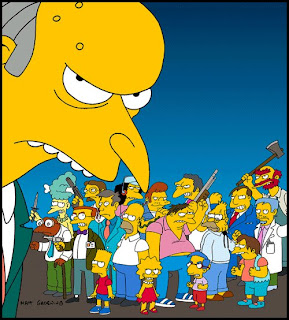 Originally introduced as Homer's villainous one dimensional boss, Burns' popularity amongst the fans has led him to become, like the best villains, multidimensional. Despite his power, he is physically weak. Inept in his love, his desire for companionship and to be loved will sometimes trump his vile nature. And he is essentially honorable; after losing his fortune, Lisa helped him regain it, and as his adviser, he paid her the 10% of 120 million owed.

But at the end of the day, Burns is a favorite because he's a grandiose bad guy, woefully out of touch with the modern world and willing to do whatever it takes to get what he wants.

Favorite Mr. Burns episode: It really comes down to three: Rosebud, a Citizen Kane pastiche from season four in which Mr. Burns yearns for his stuffed bear, Bobo, a symbol of his lost youth and innocence; Burns Heir, also from season four where in light of his inability to father an heir, he names Bart his successor; and The Old Man and the Lisa, from season eight, where Burns loses his fortune, then regains in by perverting Lisa's lessons in recycling. I went back and forth, leaning towards The Old Man and the Lisa, for the way it showcases both his evil and his honor, such as it is. But ultimately, it has to be Rosebud. One of the best Simpsons episodes, ever, it was the first time we saw Burns' softer side, and the lengths he'd go to get it back, and makes the grade for nothing else if not the sight of Burns and Smithers, in full ninja garb, hanging between the Simpsons and Flanders' homes after a failed nighttime attempt to retrieve the bear from Maggie, or when they are stuck on the kitchen ceiling as Homer spends the night slowly devouring 64 slices of American cheese.

Favorite Mr. Burns line: Who can pick just one?

"Compadres, it is imperative that we crush the freedom fighters before the start of the rainy season. And remember, a shiny new donkey for whoever brings me the head of Colonel Montoya."[Smithers whispers to him] Hmm? What? Oh, and by that I mean, of course, it's time for the "Worker of the Week Award"

Burns: Remember, your job and the future of your family hinges on our successful completion of Nuclear Physics 101. Oh, and one more thing: [ominously] you must find the jade monkey before the next full moon.
Smithers: Actually sir, we found the jade monkey; it was in your glove compartment.
Burns: And the road maps? And ice scraper?
Smithers: They were in there too, sir.
Burns: Ex-cellent! It's all falling into place.

"Family, religion, friendship. These are the three demons you must slay if you wish to succeed in business. When opportunity knocks, you don't want to be driving to the maternity hospital or sitting in some phoney baloney church. Or synagogue."

"Oh, so Mother Nature needs a favor? Well, maybe she should have thought of that when she was besetting us with droughts and floods and poison monkeys. Nature started the fight for survival and now she wants to quit because she's losing? Well, I say "hard cheese"!"