The last remaining Shinders stores closed about a month ago, victims of financial mismanagement on the part of their inept, gun-toting, meth-making owner. Quite unexpectedly, I finds himself saddened a bit by this. Shinders opened the doors to a lot of the things that I love now, and in its way, helped cultivate a lot of the interests that make me a Gentleman of Leisure today. Come, let’s take a trip down memory lane, shall we? Behold, the origin of Teebore’s love of comic books!

The chain began as a news and tobacco stand in Minneapolis at the corner of 8th and Hennepin in 1916, owned and operated by immigrant brothers from Russia. Their venture was met with success and eventually they opened a brick and mortar store. In the early 80s they scattered stores throughout the metro area, numbering a dozen-and-half or so before their untimely demise. The entire operation has always remained within the Shinders family; I believe even the recent wanker of an owner was a distant cousin of the main family.

Shinders was the first place from which I regularly bought comics. As a kid, I collected baseball cards. When I moved back to Minnesota from Wisconsin, I sought out sports card stores to provide my baseball card fix. Which led me to Shinders, where I could buy packs, single cards and display pages that fit into three ring binders. I stared up at the social misfits behind the counter, their numerous tattoos, grisly beards and ragged smiles setting them apart from other adults I encountered. They were living a dream, being around all that awesome stuff each day, and I dreamt of turning sixteen and joining their ranks.

Then a kid in one of my classes introduced me to something new: cards featuring comic book characters (I didn’t know it at the time, but they were from Skybox’s 2nd series of Marvel trading cards). I had read a few comic books, here and there, and was certainly familiar with the concepts and characters that entered the pop culture zeitgeist: I watched the Adam West Batman show, and Spider-Man and His Amazing Friends on Saturday mornings (always thought Firestar was pretty hot...), and rented videos of the old 60’s Marvel cartoons with the catchy theme songs (“Spider-Man, Spider-Man, does whatever a spider can…”). I had a few of Toy Biz’s then recent Marvel action figures and several of the awesome DC Super Powers toys from Kenner. And before I could read for myself, I had forced my parents to laboriously read the Super Powers Dictionary to me, featuring characters like Flash and Superman defining words. So I was familiar with the world of comic books, at least the broad strokes of the Marvel and DC universes, when this nerdy fifth grader presented to me baseball cards featuring super heroes instead of ball players.

So the next time I was in Shinders, I picked up a pack of those cards along with my baseball cards. And that’s the way it went for awhile, comic book cards collected alongside baseball cards. But aside from the main characters, I didn’t really know a lot of the other characters featured on the cards (“Nebula? Who’s Nebula?” “Thanos’ granddaughter,” says the card back. “Oh, okay. Who the hell is Thanos?” This was, of course, long before I became Thanos' official biographer). These new cards certainly had more to read on their backs then the standard stat lines of baseball cards, but still, I thirsted for more. So I began to seek out their source material: comic books. 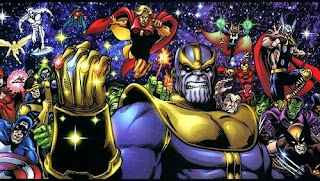 And so it was, thanks to Shinders, all I had to do was wander over to that part of the store and there were the comics. I started with the X-Men, for some reason (to this day I don’t know why-maybe that Pryde of the X-Men pilot episode really stuck with me), picking up X-Men 8 and Uncanny X-men 289 from the Shinders in Edina and reading them as my parents walked through the Galleria Mall. Being X-Men comics of the mid nineties and thus mired in continuity, I had no clue what the hell was going on, but recognized a few characters from my cards, and as with the cards, I only thirsted for more.

I bought new issues, and back issues when there were no new issues, searching in particular for the ‘first appearances’ helpfully listed on the backs of the cards, filling in my knowledge of the characters and stories along the way. I gazed longing at the comics Shinders placed on the wall, above the new comic racks, out my reach physically and financially. Eventually I discovered the Local Comic Shop in my area, a dingy, cramped hole in the wall that still remains the best comic shop I’ve ever been to (but that’s another post), and I purchased some comics there, as well. But Shinders was always the first stop, because I could get everything there.

Eventually, the X-Men led me to the Avengers, which introduced me to the greater Marvel Universe, which led me to the DC Universe, and eventually I was buying more and more comics, going to comic conventions for the first time and filling in all the back stories I could. Before I knew it, my main interest had become comic books, and while my interest in them increased, my cash flow hadn’t. Over time, the decision to buy more baseball cards or more comic books always came down on the side of comic books and within a few years, I had left my baseball card collecting days behind me.

I still collected those super hero cards as well comic books, and still I went to Shinders. But time passed, and I got older. Shinders began to lose some of its glamour. Older eyes saw the skeevyness and disorder that consistently led my mother to wait in the car while I quickly shopped. My nose, drawing ever nearer to adulthood, recognized that unique smell of Shinders (the smell of the hunt, to young Teebore) as the smell of mold and mildew. The carpet seemed to fade, the bargains on back issues paled in comparison to what I found at conventions, and the glow around the employees dimmed; they were rude and uncouth, and some seemed to not so much be living a dream as hiding from one. By the time my entire budget was being spent exclusively on comic books, I ceased frequenting Shinders, making almost all of my comic purchases at a new, clean, well lit comic shop that pulled all my desired comics for me, and at the conventions at which I now volunteered to work.

But I always made a point to go back to Shinders, every few weeks. Mainly to get supplies for my collection (comic bags, boards and boxes were always 2 or 3 bucks cheaper at Shinders for some reason, and they carried plastic display cases for beanie babies and footballs that made great action figure and bust cases) and to check out their special markdowns, but also because, well, it was Shinders. I had been going there as long as I’ve lived here, and there was familiarity and comfort there still, amongst the rude employees, pokemon-crazed kids, and the guys buying porn (my one regret about Shinders is that I never took the opportunity to go into that fabled “back room” By the time I was old enough, I figured, “why buy what the internet provided so readily for free?” Still, now I feel like I missed out on a positively unique experience).

Within the last few years, Shinders did a lot to improve itself. The new owner set new standards for the company: the employees learned a little customer service, the stores cleaned themselves up and increased their selection. They began hosting Magic and RPG tournaments and reached out to the local comic book community, becoming more involved in conventions. And then the owner was pulled over and the cops found his van stuffed full of automatic assault weapons, ecstasy, and homemade meth. Several indictments, fines and legal fees later, and the bank was looking to foreclose, as he had defaulted on the loan he had taken out to buy the company. The City of Minneapolis stepped in, citing Shinders' status as a historical presence downtown, and made arrangements with the bank for the loan to be paid back directly from the store’s profits. Several locations shut down to conserve costs.

Of course, in time, this arrangement combined with the owner’s other financial woes and seeming inability to run a business while gunrunning, caused Shinders to miss payments to its distributors, which led to a lack of product making it to the stores. I heard at some stores they weren’t even getting the local papers anymore. So of course, this cut into their profits, which then angered the bank, and so by the end of July employees coming in to work were told they could no longer be paid and all the remaining locations shut down.

At the point they closed my regular visits to Shinders for bags, boards and boxes had dwindled to once every six weeks, and stopped altogether when they could no longer get those products into the store. But I never really thought Shinders would go away entirely, and eventually they’d get back on their feet. And if they didn’t, ah well. I rarely went there anymore anyway.

Now they are gone, and while I don’t exactly miss them (though I am having a dickens of time finding a short box at a comic store in town) I find myself a little sad at their absence. Shinders was a local institution and an institution to me, as well. Shinders, either directly or indirectly, led me to a lot of what I love today. I remember fondly the way my pulse would quicken as I neared the store, feet echoing off the cobblestones outside, thoughts swirling with desire at what I would find this day to blow my allowance on. Shinders was a gateway to a lot of things-a moldy, unseemly, ill-managed gateway at times, but a gateway nonetheless. I’m saddened when I wonder where today’s ten year old could now go to buy baseball cards, and along the way be introduced to whole new worlds.
Newer Post Older Post Home
Posted by Austin Gorton at 8:11 PM