Before seeing Stardust I was standing in line at the understaffed concession stand for quite a long time. In my boredom I looked at the numerous movie posters around me. I was amazed to see how many movies that, unfairly or not, appeared to be cookie cutter replicas of the Harry Potter franchise.
You have The Seekers, The Spiderwick Chronicles, The Golden Compass, etc. I thought back to my childhood. I loved fantasy stories then. I longed for more movies like Willow and the Neverending Story. I would've loved to have grown up with the plethora of fantasy cinema that is coming out these days. However, despite me still loving fantasy, I don't think I'll be able to enjoy these new movies.
Regardless of whether the original text for these movies came before or after Harry Potter, all these movies will FEEL like Harry Potter rip-offs. I think that will hinder my enjoyment of those movies much like how I couldn't enjoy The Lion, The Witch, and The Wardrobe because I felt like it was trying to copy The Lord of the Rings movies.
So, while waiting in line for my carbonated liquid sugar and popcorned butter, I began to long for a fantasy movie that was fresh, original, and entertaining. I then entered the theater and immediately found what I was looking for.
Stardust takes place in England circa 1900s in a small town called Wall. Ironically, there is a large wall in Wall. This wall separates Jolly Old England from the magical land of Stormhold. Our hero, Tristan (Charlie Cox), sees a shooting star in the night sky fall over the wall. He vows to his sweetheart that he will retrieve the fallen star as a birthday present for her and proof of his love. With this Tristan is off on an epic 10 day journey into the land of Stormhold.
I would rather not ruin too much of the plot because that would ruin too much of the fun. Let's just say that the star turns out to be Yvaine (Claire Danes) and Tristan must convince this fair lass to come with him back to England and help him win the heart of his beloved. The duo travels through Stromhold meeting a cast of wacky characters most of whom have some sort of ulterior motive. 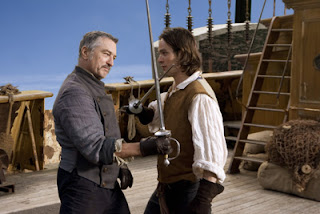 The acting in this movie is good. The actors never take themselves too seriously and there's a lightheartedness that keeps the movie the fairy tale it's supposed to be. Charlie Cox plays Tristan well enough and the progression of his character is both believable and pretty cool. Claire Daines does well with a character who could have easily been portrayed as uber annoying. Daines walks a fine line but the character of Yvaine comes across as sympathetic and likable instead of bitchy and whiny. Oh, and being hot doesn't hurt anything either. Robert De Niro plays a pirate with...multiple layers. Robert De Niro's Robert De Niro, so there's not more to say. Michelle Pfeiffer is also good as a witch but she becomes less hot as the movie goes along, which is sad.
Stardust's plot comes straight out of a book by the same name written by Neil Gaiman. Gaiman has written a whole bunch of other fantasy books all of which I have not read. But in watching this movie I can see why he has such a cult following. Of course, his annual virgin sacrifice helps with increase his cult following too.
Anyway, the plot has quite a few threads that all intertwine. It comes together simply enough, though, so it's not too hard to follow. The love story doesn't drag on with as much bickering and misunderstandings that if could have. Smallville, you could learn a lesson that needed learning years ago. At the end of the day Stardust is fun, whimsical, fast moving, and entertaining. And as far as I'm concern, every movie should have it's own peanut gallery cheering and jeering the action.
This is my second review on this blog and it happens to also be my second positive review. Which pretty much means I'm losing my touch. I generally consider myself hard to please yet the last two movies I saw I've enjoyed. I would love to really savage a terrible movie, but unfortunately for me (and fortunately for anyone who goes sees this movie) I can't savage this movie. Stardust is just plain good.

The Disappointing: The movie's called Stardust, yet everyone's favorite star-brained mutant (who is really Magneto in disguise accept really not Magneto in disguise) did not make an appearance! As far as I'm concerned, a cameo by Xorn was a must. 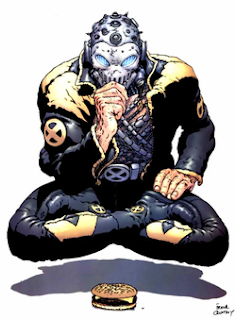 My origin is so convoluted I can't even keep it straight. Hell, for all I know I also was a star that fell from the sky into the magical land of Stormhold!

Sure, it's sweet. Maybe even a little too sweet. If you're male, they may say you're unmanly for drinking it. But it's good. And let's face it, after you've had enough you won't even understand WHAT they're saying let alone care. I say you should be comfortable enough in your masculinity to drink a lemon drop while watching this enjoyable escape from reality.
Newer Post Older Post Home
Posted by Dr. Bitz at 9:39 PM