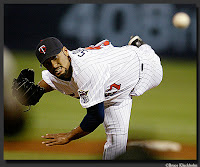 There was a time that when being a Twins fan was easy. This ease partially came from that fact that you knew that 1 out of every 5 games you could watch the best pitcher in baseball.
Johan Santana was a pitcher who could dazzle you with a fastball and confuse his opponents with a devastatingly deceptive change up. There was seemingly no pitch this guy couldn't throw for a strike. Every time Santana came to the mound you knew there was a chance you'd witness history. Those days have seemingly come to end.
On August 9th Santana broke a Twins record with 17 strikeouts in a game. He only needed 8 innings to do so. Santana recorded a win against the Texas Rangers that day with a line of 8 innings pitched, 2 hits, no walks, and 17 strikeouts.
In Santana's next 3 starts he's given up 12 runs, 24 hits, and 5 walks all in 19 innings of work. For you non-Math majors out there, that's a 5.68 ERA and 1.53 WHIP. Those numbers are pedestrian at best. Santana no longer looks to be the God of pitching I thought he'd be when I drafted him in the first round of my Fantasy Baseball League.
I've decided to look deeper into what Santana's pitching issues may be. I've uncovered some startling evidence. This is a photograph taken during Santana's remarkable pitching performance against the Texas Rangers on August 9th: 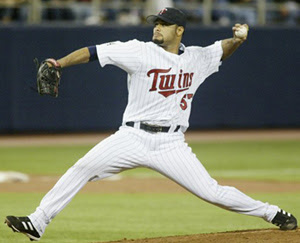 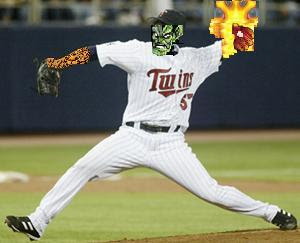 Sure, at first glance it all looks the same, but take a closer look. Notice the orange, rocky right arm and the flaming left arm. Also notice the greenish tint in Santana's face. This may come as a shock to you, but I don't think that's Santana at all. The more I look at it the more I'm convinced that is actually the Super Skrull in Santana's garb!!!!!!
Suddenly everything makes sense. I'm sure we remember the fateful day the Skrull Empire challenged Earth to a game of baseball. The terms of the deal were simple. If the Skrull Empire won they'd take control of Earth. If Earth won the Skrull would promise to stop peeing in all of the Earth's office coffee pots.
The stakes were high, so only one man could be counted on to pitch in this epic game, Johan Santana. Johan pitched a gem that day, but the game became heartpoundingly intense during the top of the 9th inning. Earth, the home team, was up 3-1. The Skrull's cleanup hitter KI'rt (AKA Super Skrull) came to bat with a Skrull on first and second and two out. The pitch count was 2 balls and one strike. Johan pitched a 92 MPH fast ball high and tight to KI'rt. KI'rt somehow managed to turn on the ball. The baseball was bombed down the left field line. It appeared to be a home run that would give the Skrulls a 4-3 lead. However, the second base umpire called it foul.
This created quite an uproar from the Skrull bench. Not helping matters was the fact that the Second Base Umpire was a Kree, a race of aliens that have warred with the Skrull for centuries. The Skrull's team manager Tommy Lasorda argued the call stating that the umpire was biased. The umpires got together and decided that the final decision should come from the third base umpire. Now, why Daredevil was third base umpire for this game I will never know, but he was. And Daredevil had no choice but to believe what the Kree Umpire said.
So, the the hit was officially ruled foul and the at-bat with Super Skrull continued with a count of 2 balls and 2 strikes. Santana threw one of his patented 4 MPH change ups and KI'rt's swing was way in front and thus KI'rt struck out to end the game.
As the team boarded their spaceships to leave Earth and find an new place to store their urine many could hear the Super Skrull swear vengeance against Johan Santana.
Well it looks like KI'rt has found his revenge. It's apparent he has kidnapped Johan Santana and taken his place on the mound. Super Skrull is now purposely lobbing balls over the middle of the plate in order for opponents to launch moon shots into the upper deck. He does this all to besmirch the good name of Johan Santana.
So I urge everyone out there in cyberland to search their couch cushions and check all the late night clubs. Santana's out there somewhere and the Twins need him back. He's the only reason to watch this sorry team anymore.
Newer Post Older Post Home
Posted by Dr. Bitz at 12:03 AM