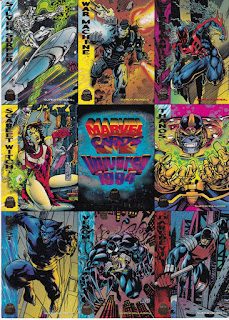 The front of the main hero/villain cards feature an image of the character, with a solid color border running top to bottom on the left hand side, with the character's name in the top left written in shiny foil lettering.

Like the Marvel Masterpieces and the recent Fleer Ultra X-Men sets, these cards are pretty on thicker stock, with a glossy finish.

The hero/villain card backs are all landscape orientated, with a short bio above a power ratings graphic on the right (the power ratings *really* need an "energy projection" category, to balance out characters who may not be super-strong or great fighters, but still powerful). On the left, a “moment of truth” featuring a significant event from the character’s history (depicted via an original art recreation of the event) with the issue in which it occurred, above the character’s names and group affiliations. The card’s artist(s) is also listed on the back. 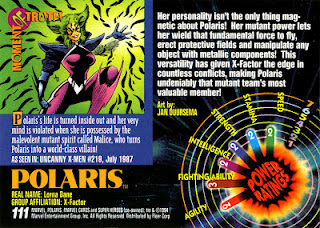 Firsts and Other Notables
This is the final set of "regular" Marvel Universe cards; though the speculator card market (in both sport and non-sport cards) had at this point, like the comic book speculator bubble, already burst (even if the companies involved weren't fully aware/accepting of that fact yet), Marvel will continue to make assorted trading card series after this one. However, having already spun off a number of different series in addition to the main Marvel Universe set (like the X-Men "Fleer Ultra" cards, Marvel Masterpieces, and the upcoming high end Flair sets), it is those series, and not this original Marvel Universe line, that will be continued moving forward.

The first nine cards of the set are a “Freeze Frame” subset, so called, I believe, because they feature a drawn image (by Pat Oliffe) superimposed over a real world photo. 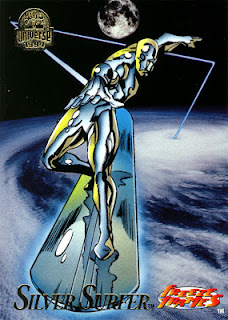 The next 81 cards are broken up into nine “pages” of nine, called 9-Block Battles, with which each page featuring a different recent Marvel event/crossover (like “Fatal Attractions” or “Suicide Run” and the nine cards connecting to form one central image (similar to how the previous set’s hero and villain cards were divided into groups of nine to form one collective image). 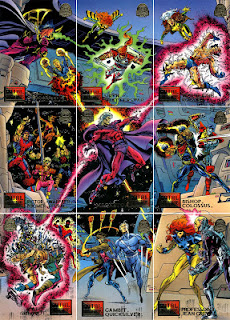 Somewhat humorously, the story summaries on the back of the nine part images don’t always line up - for example, the “Fatal Attractions” card featuring Cable being attacked by Magneto summarizes the part of the story when Magneto rips out Wolverine’s adamantium, which seems like a failure of design.

Unlike the previous sets, this is the first to not lead with the hero/villain cards before delving into other categories (with the exception of the bizarre Series IV, that didn't really have properly distinct hero/villain cards).

The hero/villain cards are grouped by teams/character families (so all the X-Men and their villains, then the Spider-Man characters, etc.), alphabetically within the group (so Banshee, then Beast, etc.). The “family” groupings somewhat presage the future reorganization of the comics publishing, in which the editor-in-chief position is abolished in favor of multiple equal editors running little “families” of titles.

Punisher is in his own “family” of one.

Black Knight’s moment of truth is from the UK Marvel Super Heroes Book in which he appeared with Captain Britain, a rare reference to Marvel UK material. 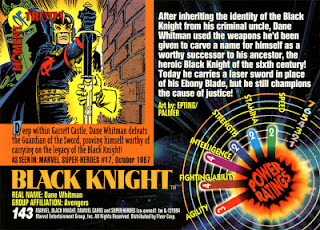 Hawkeye’s group affiliation is none, as this set was released after he quit the Avengers West Coast, and he wasn’t part of Force Works.

Quicksilver is listed amongst the Avengers

Force Works gets it’s own group (featuring the characters newer, 90s-riffic costumes), as opposed to being grouped with the rest of the Avengers. War Machine is included with group, but his cardback lists no group affiliation.

Daredevil, Hulk and the Fantastic Four (and their villains) all get put into a miscellaneous “Marvel Universe” grouping(seems like Punisher could have gone there, too).

Class of '94
This is the first set to neither feature a set of Rookie cards, nor call out new characters in some fashion. Regardless, such stalwart new characters receiving their first (and probably only) cards include Spider-Man supporting characters Nightwatch & Solo (both soon to be featured in  Sony films, presumably), Warrant, Salome, Psi-Lord and Trauma. 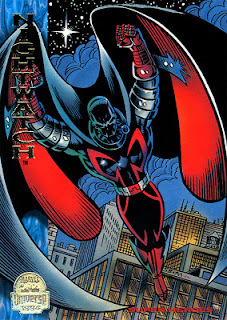 X-Related
Not surprisingly given their sales dominance at the time, the X-Men are the first group featured in the heroes/villains category, despite being alphabetically last and already having their own series of trading cards dedicated to them.

On sale a few months before the launch of the series, the Generation X characters are nevertheless fully represented in the heroes section, with each member of the team (including Mondo, who doesn’t show up for awhile, and then, not as a member, so clearly the set is using promotional material as a source) getting their own card, all drawn by series artist Chris Bachalo. 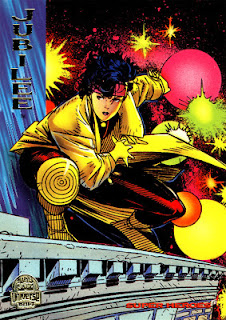 Colossus appears in his Acolytes uniform. 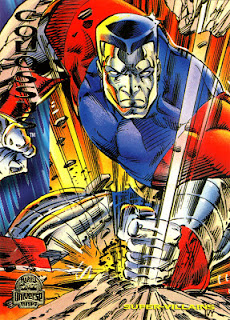 Cyclops’ Moment of Truth is sending Nathan into the future. 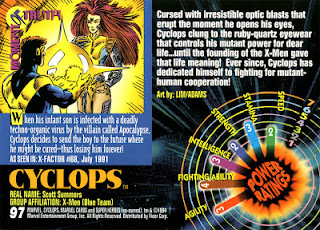 Exodus’ card confirms he killed Cortez (for now) during “Bloodties”.

In the wake of their climatic storylines the previous year, Haven, Siena Blaze & Gamesmaster receive cards. 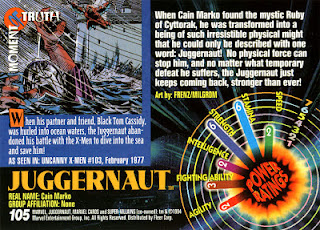 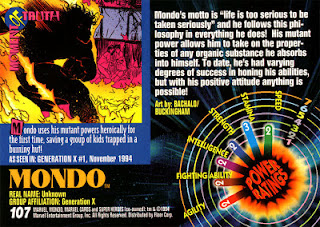 Mystique’s cardback acknowledges the recent reveal of her relationship to Nightcrawler & Graydon Creed.

Jean Grey gets a card under the name Phoenix.

Random’s arm guns are called out as a separate mutant power from his “adaptation” power.

Of Their Time
Obviously, all of the “event” cards are very 90s drive, but of the group, the “Fall of the Hammer” (a crossover amongst all the 2099 titles) and “Crash & Burn” (a storyline in Iron Man that seemed mostly designed to briefly feature more popular characters (like Venom) in the book seem particularly 90s in retrospect. This set is also how I first learned about the “Suicide Run” Punisher crossover that featured multiple different “kinds” of Punisher (a la DC’s “Reign of the Supermen”). 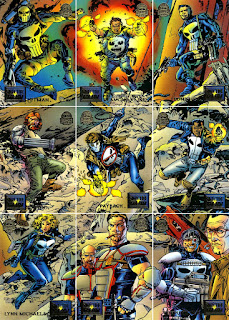 This is the first set of cards with a heavy representation of the 2099 characters, as they receive their own subgroup.

Vulture is featured in his brief de-aged form (which is also how he appears in the Spider-Man animated series). 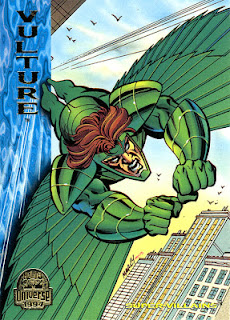 Strange, a character created by Dr. Strange and resembling Dr. Strange's 1970s "superhero" look, receives his own card in this set; Dr. Strange himself, does not.

Thor's card features him wearing his first crappy 90s costume, Daredevil in his short-lived armor, and Invisible Woman in her skimpy 90s attire. 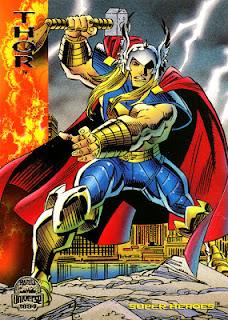 Legacy, son of Captain Marvel, receives his own card, the only character from the '93 annuals (which, of course, featured a trading card for the new character introduced in the comic) to be so featured in this set. 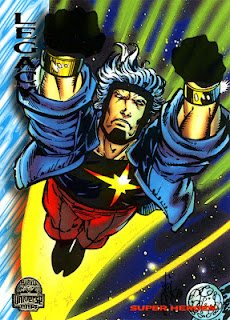 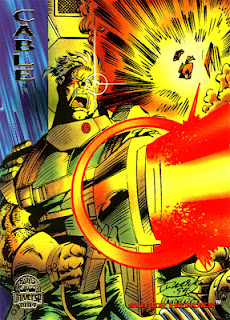 Strong design on this card, as it almost seems like the colored border is a wall Cable's got his back up against. 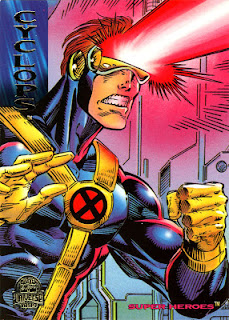 Having Ron Lim draw this card gives it a very "animated series Cyclops" vibe for whatever reason. 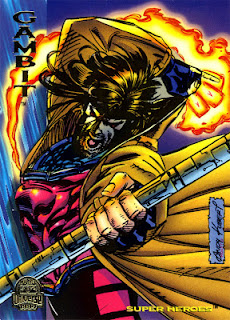 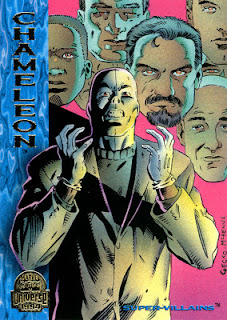 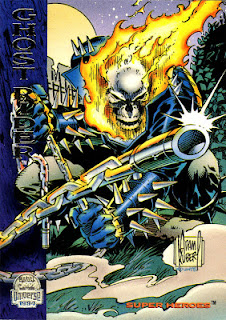 Mostly, I like the almost 3D perspective of Ghost Rider's chain flying off the card. 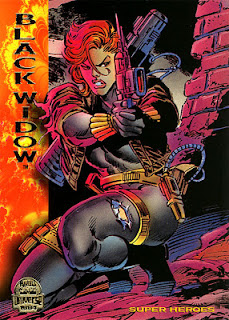 Steve Epting draws most of the Avengers cards (as he was the regular artist on the book at the time), but I like his rough-and-ready, battle-worn Black Widow most of all. 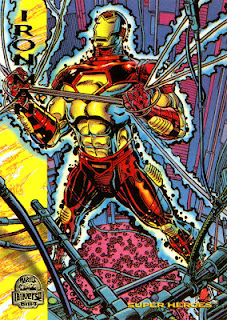 Austin's Analysis
The final set of Marvel Universe cards, the line which started Marvel's trading card output, is thankfully a marked improvement on the terrible previous set. The "nine card collective image" approach that so damned that set remains, but thankfully, the series also returns to presenting traditional single card images devoted to assorted Marvel heroes and villains (ie the trading card's bread-and-butter), helped in part by increasing the overall number of cards back to 200, which gives the series more wiggle room. The more art-heavy cardbacks of the previous series are improved as well, bringing back the biographical information that made these cards so invaluable to new readers (or readers familiar with only certain corners of the Marvel Universe). The "Moment of Truth" blurb is an appreciated addition as well, expanding on the traditional "first appearance" notation to share a specific, important piece of the character's history beyond the general biographical information.

The set isn't without its problems. The overall design of the cardfronts can crowd the art, and in far too many cases, the shiny foil names are obscured or hard to read (which is less a problem with Iron Man than, say, Psi-Lord). Placing the hero/villain cards behind the 9-Block Battles seems backwards, and the 9-Block Battles themselves are, of course, very of their time. The cardbacks are still landscape while the card fronts are portrait, meaning each card (or the binder holding the cards) has to be turned to read the backs. And the fact that there's essentially only two categories (with the Freeze Frames feeling largely like either an aborted chase set or a superfluous addition to the hero/villain cards) makes the set feel less complete, despite the larger number of cards; the absence of the Rookies & Teams categories, along with something along the line of previous sets' Weapons & Technologies or Unsolved Mysteries, is felt.

Thus, while the story of Marvel's trading cards is far from over, this particular branch of them - which is, really, the trunk of Marvel trading cards - comes to a close with neither a bang nor a whimper. Neither the worst or the best of the lot, Series V manages to both improve on the poor design of the series' nadir, while falling to exceed (or even reach) the aesthetic & entertainment highs of the best sets. Given the state of things - and things to come - in comics and the larger collectible market in 1994, managing to end a venture on, if not a high note, then at least not the worst possible note, is something of an accomplishment. It is an appropriate conclusion to a product born of a very specific time via a pretty heavy marketing hand, which nevertheless was hugely influential, on the industry as whole, but especially on me.