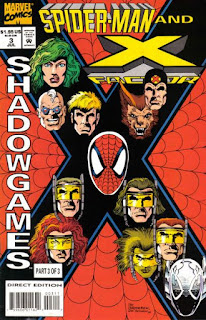 In a Nutshell
Spder-Man & X-Factor take down a shadowy government project to artificially create superhumans.

Plot
Issue #1: While attempting to attend a charity event hosted by Flash Thompson, Spider-Man is attacked by a group of superhumans called the Shadowforce. Due to the presence of Flash, Spider-Man is unable to fully defend himself, and his annoyance at Flash is mimicked by Shadowforce member Mirrorshade before Spider-Man is captured. Witnessing all this, Flash ultimately contacts X-Factor for help, telling them Spider-Man was kidnapped by mutants. Forge investigates and discovers most of the members of Shadowforce are supposedly in prison, while Spider-Man wakes up in Shadowforce's base. After escaping confinement, he learns the members of Shadowforce are the result of a secret military project attempting to recreate the powers of existing superheroes. He copies data about the project onto a disk, then notices Mirrorshade, intent on killing Flash, escape, but before he can follow him, X-Factor arrives, triggering a conflict with Shadowforce.

Issue #2: Spider-Man tells X-Factor he needs to follow Mirrorshade to save an innocent man, and they agree, staying behind to fight Shadowforce. However, Shadowforce quickly defeats X-Factor. Spider-Man tracks Mirrorshade to a commuter train heading towards New York and sneaks on in his civilian identity. Shadowforce, tracking the disk Spider-Man took from the facility, follows and takes the train hostage. Spider-Man is able to get the hostages free but remains overwhelmed by Shadowforce until X-Factor arrives. Just then, Shadowforce leaves the range of the force controlling them, and they break off, but Mirrorshade has almost reached Flash Thompson.

Issue #3: Spider-Man holds off Mirroshade until X-Factor arrives, causing Mirrorshade to shut down after attempting to mimic all of X-Factor. However, Mirrorshade is rescued by one of the Shadowforce, who races back to their base in Virgina, which, having broken free of their government programming, they've commandeered. X-Factor & Spider-Man return to the base, which is surrounded by reporters investigating the news of the government secretly creating superbeings. Reasoning that Shadowforces' artificial abilities must be powered by something, X-Factor distracts Shadowforce while Spider-Man disables the power generator. With Shadowforce disabled, General Sharpe, the head of the project, forbids X-Factor, as federal agents, from sharing any information with the press about Shadowforce. Spider-Man, however, has no such compunctions, and tosses the disk he created to one of the nearby reporters, which ultimately leads to General Sharpe being dishonorably discharged.

Firsts and Other Notables
This three issue limited series was produced out of the Spider-Man office (rather than the X-Men one), and is mildly notable for being written by Kurt Busiek just before he hit it big with Marvels and started becoming a household name. It features the title characters fighting Shadowforce, a group of criminals given powers as the result of a secret government project attempting to create superheroes by replicating precious superhero origins, like the FF’s cosmic rays or the Hulk’s gamma bomb. Shadowforce is powered remotely and controlled by government handlers within a finite range, and have yet to appear outside these three issues. 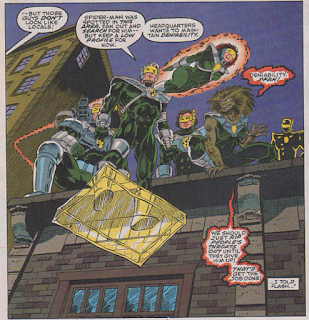 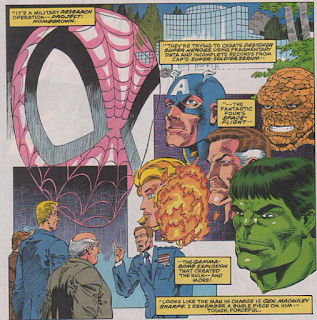 Reportedly, Kurt Busiek routinely apologizes for this series whenever it gets brought up (ie someone asks him to sign it at a convention).

Chronology Corner
A note in each issue sets this story before X-Factor #100. More specifically, it has to take place between issues #95 and #96, after Forge has become the team liaison, Wolfsbane has returned from Muir Island, and Quicksilver has left.

A Work in Progress
One of the things I love about J. Jonah Jameson as a character is that, for as much as he’s terribly unethical when it comes to Spider-Man, he’s a pretty hardcore advocate for a free press, and that’s shown here when he stands up to Federal agents. 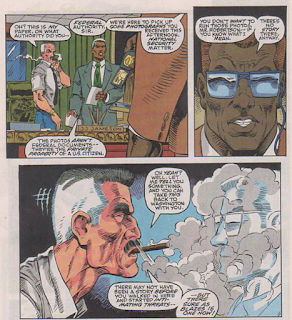 At one point, Spider-Man thinks to himself that X-Factor is okay despite having a bad reputation of late; I’m not sure what that’s a reference to, as the new X-Factor has mostly acquired itself well in all its public battles.

Polaris uses her power to lift a group of guards via the metal in their clothing (belt buckles, shoelace rivets, etc), something we don’t see too often (usually when Magneto is levitating people, it’s a more general “reversing the pull of gravity” kind of thing, as opposed to lifting them just via surrounding metal). 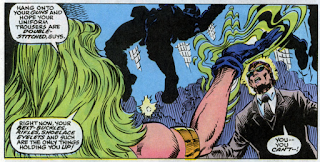 Echoes of Mellancamp: Madrox is upset when he inadvertently tricks Mirrorshade into killing himself by attempting to duplicate his power. 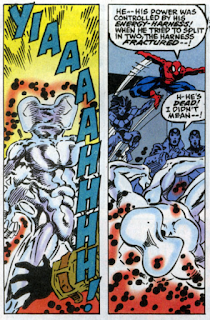 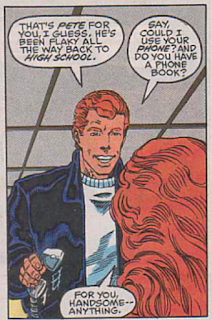 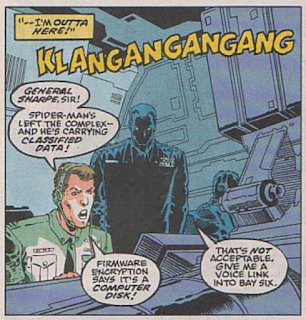 Austin's Analysis
Much like how the X-Men are often shown training in the Danger Room or tracking down a new mutant when they pop up for guest appearances in other titles, the members of X-Factor are usually shown functioning in their capacity as a government agents outside their main book. This series is an example of that, as their involvement in the story is predicated entirely on them being, essentially, a Mutant FBI, getting involved simply because someone contacted the authorities looking for help.

Unfortunately, that's about the most interesting thing to this series, which is so pointless it's hard to tell who these was even being written for (even X-Factor, beyond the initial point of their involvement, is superfluous; any super team could have served the purpose they do in the rest of the story). Kurt Busiek will go one to become one of the all time great comic writers of the age, but this story is basic, bland and workmanlike. All the characters are presented as mostly on-model, and his Spider-Man isn't bad, but X-Factor exhibits little of the signature humor or psychological elements that define the series under David & DeMatteis. If we wanted to be generous, *maybe* an argument could be made that the Shadowforce is in some way meant to serve as a critic of the poorly-developed, flash-in-the-pan characters populating many of the Image books at the time, but that's really a stretch.

Instead, this just reads like a cheap attempt to get Spider-Man and X-fans to buy one more comic each month for three months. To be clear, nothing here is all that bad; the writing and the art are both serviceable and perfectly fine, if largely unexciting. This series' biggest sin is just how vanilla it is, to the point where it's hard to even get mad at how ultimately superfluous the whole thing is.