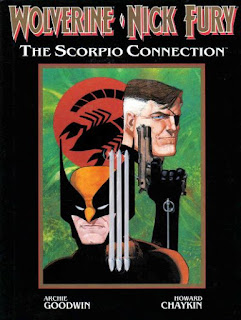 In a Nutshell
Wolverine & Nick Fury battle a new Scorpio.

Plot
A SHIELD camp in Peru is attacked, with everyone there, including David Nanjiwarra, killed by someone who leaves behind a Scorpio image. Receiving word of the attack, SHIELD head Nick Fury decides to investigate it personally due to his relationship with the original Scorpio. Meanwhile, Wolverine learns of Nanjiwarra's death, something SHIELD had hoped to keep from him, and decides to investigate his death himself, as Nanjiwarra was an old friend whom Wolverine suggested join SHIELD. When Scorpio attacks a SHIELD base in Venice, Fury is waiting, and though Scorpio escapes, Fury confirms its not his long-dead brother, the original Scorpio. Meanwhile, Wolverine tracks Scorpio from Peru to Istanbul, where he encounters Scorpio's mother, Amber D'Alexis, and is nearly killed by Scorpio, who believes he is the son of Fury's brother. Wolverine is rescued by Fury, and the pair track Scorpio to a base on the Aegean Sea, where Amber has laid a trap for them. However, when Scorpio & Amber attack a SHIELD facility in Atlanta, Fury & Wolverine are waiting, having escaped Amber's trap. Scorpio & Amber flee attempt to flee, but Fury manages to disarm Scorpio, at which point Amber reveals he's actually Fury's son. Wolverine kills Amber, but Fury stops him from killing Scorpio when he reveals that Nanjiwarra was a traitor to SHIELD, sating Wolverine's fury about his death. Instead, Fury takes Scorpio into custody, hoping to deprogram him, and Wolverine bids Fury farewell, while also congratulating him on becoming a father.

Firsts and Other Notables
This issue establishes that, like so many other long-lived characters (like Captain America), Wolverine has a past with Nick Fury that goes back to before his X-Men days. 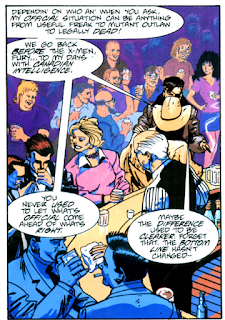 It also introduces a new Scorpio (the third), who turns out to be Nick Fury's son Mikel. The original Scorpio was Fury's brother Jake, and Nick spends a good chunk of this issue dealing with his guilt over Jake's actions as Scorpio and the role he played in pushing him to those actions (despite a later retcon which established that the original Scorpio was actually a Life Model Decoy of Jake that went insane, something Fury claimed to have always known). This Scorpio will appear a few more times (notably in 1994's direct sequel to this issue). The original Scorpio used as a weapon and inter-dimensional "key"; the Scorpio in this story uses a technological facsimile thereof. 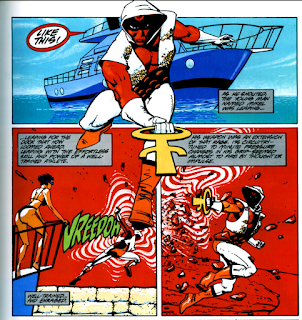 Rogue, Colossus & Dazzler briefly appear alongside Wolverine (fighting Arcade - or rather a robot facsimile thereof). Though this was published during the Australian Era (and Rogue's costume matches one of her looks from that time) and shortly after the launch of Wolverine's solo series, it is considered to take place further back in time, shortly after the X-Men's guest appearance in Dazzler #38 (to explain her presence amongst Rogue, Colossus & Wolverine at a time before she joined the team) and before the X-Men/Alpha Flight limited series (which does at least explain Colossus' second JRjr costume). Apparently, this issue was worked on over the course of several years, accounting for the chronological drift in costuming (from a Nick Fury/SHIELD perspective, it also has to take place before the 1989 Nick Fury vs. SHIELD limited series, which briefly broke up the organization). 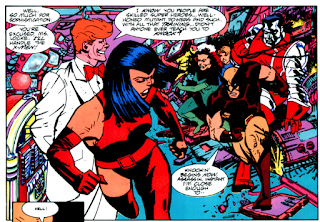 We get another "old friend Wolverine cares deeply about but whose never been mentioned before and won't ever be mentioned again" in the form of David Nanjiwarra, an Aborigone who worked for Australian intelligence and saved Wolverine's life when he was an agent of the Canadian intelligence service. Ultimately, Fury reveals that Nanjiwarra was a traitor, which at least explains why Wolverine stopped caring about this guy after this issue.

This was originally published as a hardcover graphic novel, complete with dust jacket, with a price of $16.95. Marvel stopped numbering their graphic novels (ie the New Mutants first appeared in Marvel Graphic Novel #4) with #28, but had they continued to do so, this would be #50.

Creator Central
This book is written by former Marvel Editor-in-Chief Archie Goodwin (who will go on to write another Wolverine story infused with bits of 80s action/adventure stories in Wolverine #19-23) and drawn by Howard Chaykin, most notable 'round these parts for kicking off Marvel's adaptation of Star Wars.

It also contains a note of thanks to Jim Steranko, "creator of the original Scorpio".

A Work in Progress
Realizing Arcade is a robot, set to explode, Wolverine throws himself on Rogue to take the brunt of the blast. Despite the fact that Rogue is, you know, largely invulnerable. 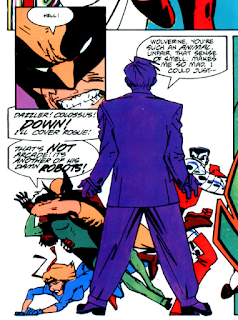 Nick Fury is incensed at the notion that all the SHIELD agents who fought the original Scorpio have aged out of the agency, which really doesn't work in the context of the sliding timeline (in which the amount of time between Scorpios is probably all of a few months).

There's a bit which seems like an attempt to justify superheroes using costumes in a real world setting, with a pair of SHIELD agents discussing Wolverine's look and speculating it helps get in the right mindset for his work. 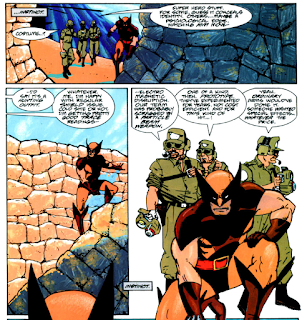 At one point, Fury & Wolverine use SHIELD glide suits, a notable element of the old Steranko-drawn SHIELD tales.

The Best There Is At What He Does
When Wolverine impales Amber from behind, the narration suggests that he intended only to wound her, and that she turned into the strike to make it a killing blow.

Austin's Analysis
On the surface, there's not a whole lot here that's all that different from countless other Wolverine one-shots, some already reviewed, with plenty more to come: it takes Wolverine away from the familiar trappings of the X-Men, drops him into a different kind of story (here, it's a James Bondian international thriller kind of deal), usually introduces a character the story swears is important to Wolverine to serve as a catalyst for his involvement (but who never has been mentioned before or after the story), and occasionally tries to push one or more boundaries that can't be pushed in the regular Wolverine or X-Men books (here, there's swear words!). But despite this checking all those boxes rather routinely, along with a few other problems, this is actually a rather well done entry in this sub-canon of Wolverine stories, and a lot more entertaining than expected.

For one thing, the art is effective & engaging throughout. I've never been a huge fan of Howard Chaykin's art, but whether it's the higher quality production values or the fact that he worked on it for years, his art really pops in this book. There's a roughness to it, in places (reminiscent of Frank Miller's work on the original Wolverine mini) but also an elegance (such as in the black-and-white sequence involving Nick Fury seducing Amber); that contrast fits the more Bondian elements of the story, as does a few design hat-tips to the old Steranko SHIELD stories (which also shared an aesthetic with the super sot stories of the 60s).

For another, Goodwin manages to use the non-traditional publishing format to tell a more adult story without being really obvious about it. Far more than gratuitous sex or graphic violence (a few swears aside) it's Nick Fury's ruminations on getting old, his attempts to grapple with his guilt over his brother's actions (including the fact that he slept with his brother's girlfriend - and fathered a child with her) and how his actions as part of the job he still remains mostly devoted to contributed to his brother's fate (he slept with his brother's girlfriend as part of a SHIELD op) that really sells the "adult" themes of the book. The way the new Scorpio is symbolic of all that, and how it colors Fury's interactions with the more vengeance driven Wolverine, is both explicit within the story but also subtlety presented (basically, this is the kind of adult story I imagine Mark Millar probably thinks he writes, instead of what he actually writes, which is usually more like what a twelve year old boy *thinks* an adult story would be like).

It's certainly not without its faults: Goodwin seems to be stretching the story a bit to fit the page count, Amber, the book's only significant female character, is done no favors by the air of 80s machismo that permeates the story from top to bottom, and Wolverine is nearly superfluous to the whole thing (this is, at its core, a Nick Fury story; Wolverine is mostly there to create tension between his desire to murder Scorpio and Fury's desire to redeem his brother - and himself - by redeeming his son, and Wolverine more or less backs off his desire the moment Fury reveals Wolverine's murdered friend was a traitor). But it's more well-produced and way more entertaining than the vast majority of Wolverine specials/oneshots, proof that, in the right hands, these kinds of stories can be worth the time.

Next Issue
Next week, we jump into the future for the Adventures of Cyclops & Phoenix #1-4!
Newer Post Older Post Home
Posted by Austin Gorton at 12:00 PM