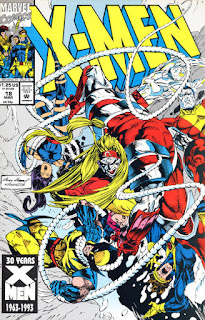 "The Crops Mature: A Skinning of Souls Part Two"
March 1993

In a Nutshell
The X-Men battle Omega Red & Soul Skinner.

Plot
The fight between Omega Red & Soul Skinner ends with Omega Red in Soul Skinner's thrall. Later, the X-Men, along with Colonel Vazhin, arrive on the outskirts of Neftelensk. Entering the town, they find everyone, including Darkstar and Father Garnoff, unresponsive, before they are attacked by Omega Red. Meanwhile, Russian officials decide to activate Red Flag #133 to stop Soul Skinner, while in Japan, Kwannon is tasked by Lord Nyoirin with slaying her other self, Psylocke, before she can re-enter his service. In Russia, the combination of Omega Red and the Soul Skinner defeat the X-Men, but Colossus & Vazhin manage to escape, and discover that Soul Skinner's power does not affect children, which prompts Vazhin to apologize to Colossus, for it makes it even more certain that Red Flag #133 will be activated. Back at Colossus' home, Russian agents arrive, killing his parents and capturing Illyana, as Vazhin explains that in order to stop the Soul Skinner, his government will attempt to accelerate Illyana's age to access her latent mutant power, a process that could very well kill her.

Firsts and Other Notables
After being mentioned last issue, the Soul Skinner makes his first appearance this issue, depicted as a green-skinned person with weird prongs/leech-thingees on his knees/face (presumably on the Astral plane) and a more reserved-looking bearded man in real life. 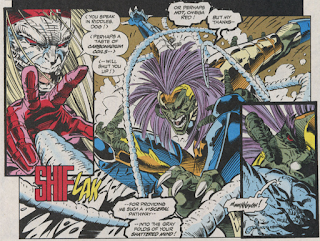 The purple-haired assassin with a grudge against the X-Men who debuted last issue gets a name - Kwannon. Her would-be benefactor, Lord Nyoirin, appears for the first time, but he's not really relevant outside of the role he plays in the upcoming Psylocke/Revanche retcon. 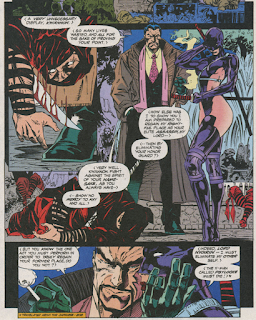 Colossus' parents are killed this issue, executed by agents of the government who capture Illyana, hoping to jumpstart her mutant power to take out the Soul Skinner, the latest entry in the running "Put Colossus Through the Wringer" subplot. 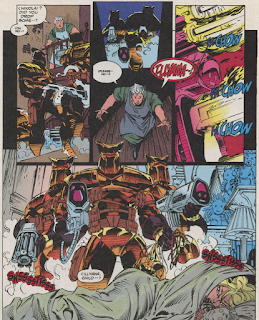 This issue is somewhat infamous for the way it depicts Psylocke wearing, along with most of the other X-Men, a fur-trimmed cold-weather jacket...over her regular "bathing suit" costume, which leaves the vast majority of her legs bare (by contrast, Jubilee, whose regular look usually involves her wearing shorts, wears pants in this story). 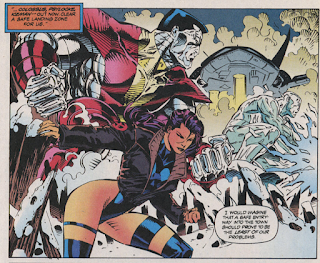 A Work in Progress
This issue seems to suggest, via Soul Skinner, that Omega Red's real name is Vasyliev Arkady, but it will later be revealed to be Arkady Russovich.

Colonel Vazhin dons a suit of high tech armor this issue, meant to shield him from telepathic attack (the Russian agents who capture Illyana wear it as well). 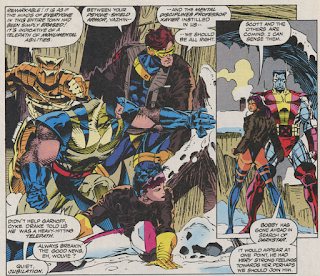 Matsu'o, who originally revived Omega Red in issue #4, is on hand meeting with Russian officials. 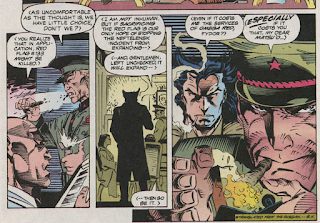 As the Soul Skinner "skins" Cyclops' mind, he sees an image of a baby with Stryfe's helmet, and comes up short when he realizes that Cyclops has also lost a child. 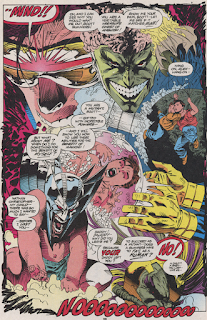 It's in the Mail
A response to a letter in this issue mentions that a new team of X-Men is in the works, which is, I believe, the first reference to the upcoming Generation X (though that title isn't mentioned).

This issue also contains two different letters pointing out the "Wolverine says he shattered a rib, but his bones are unbreakable" flub in issue #16.

Austin's Analysis
This issue opens in media res, with Omega Red having entered Nefletensk and confronted the Soul Skinner between issues. This is a technique that, when executed well, can drop a reader into a story at a moment of maximum excitement, eager to learn how events progressed to that point. When done poorly, it can be off-putting and confusing, and that's case here. It fails mostly because this opening is also the first actual appearance of the Soul Skinner. Mentioned last issue, no one has actually seen the character until the opening panels of this issue, leaving readers to monetarily wonder who the weird green vampire guy fighting Omega Red is. Instead of being excited, we're just left confused, and I'd also argue that part of the reason Soul Skinner is so forgettable (aside from this story being his only appearance to date) is in part because of how he's first introduced here.

Another reason he's so forgettable becomes clear in this issue as well, as the Russian government's plans for Illyana are revealed and Colossus' parents are murdered, thus establishing that this story is, ultimately, another chapter in the ongoing attempt to push Colossus to the edge by stripping away everything he cares about (first he found Mikhail only to quickly lose him, now his parents are gone and Illyana is being threatened). As a result, this story, if remembered at all, is remembered for those elements more than it is for the villain who gives the story its name.

Next Issue
Tomorrow, X-Force goes to space in X-Force #20. Friday, more fun with the Warpies in Excalibur #63. Next week, Uncanny X-Men #299.