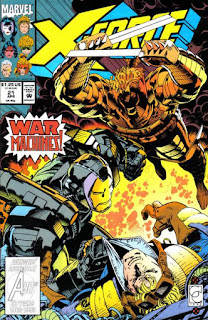 In a Nutshell
Sam tries to save Graymalkin as X-Force battles Iron Man.

Those killers: Fabian Nicieza & Greg Capullo
Inks with a knife: Harry Candelario
Letters with a bullet: Chris Eliopolous
Colors with blood: Javins/Buccellato
Edits with adrenaline fear: Bob Harras
Behind you every step of the way: Tom DeFalco

Plot
X-Force engages Iron Man, and the resulting damage, combined with the recent EMP burst caused by the collision with the Stark satellite, causes Graymalkin to begin breaking apart. On Earth, Warpath, Boomer & Siryn return from shopping and are ambushed by the Externals, while Domino and Grizzly visit Hammer. On Graymalkin, Professor teleports Sam & Roberto to his command center just as Lila arrives to teleport the team to safety. Sam and Roberto figure out that Cable gave Sam override access to Graymalkin, and Professor needs his help to determine which components of the station to jettison in order to keep the station together. On Earth, Vanessa and her roommate visit a bar, while Deadpool picks up Vanessa's trail. On Graymalkin, Rictor tells Lila they can't leave behind Iron Man and the SHIELD team, while Sam & Roberto begin jettisoning components of the station to Earth. But just as they manage to get the station stabilized, Professor suddenly detects an electromagnetic anomaly, and Graymalkin explodes.

Firsts and Other Notables
Graymalkin explodes at the end of the issue, and while parts of it will survive (and ultimately be incorporated into Magneto's new Asteroid M, Avalon), this effectively marks the end of Cable's space station. 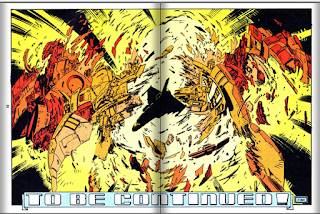 As part of their continuing search for X-Force, Domino & Grizzly check in with their old teammate Hammer for help. In the process, we learn that Grizzly's first name is Theodore and Domino's Beatrice. "Beatrice" will stick as Domino's given name for awhile, but ultimately it will turn out to be a nickname given to her by her husband, with her real given name revealed to be Neena Thurman. 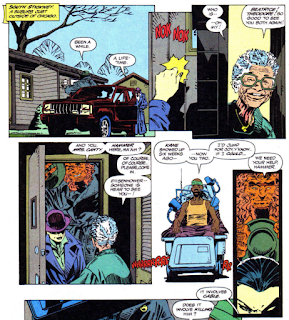 Warpath, Boomer & Siryn are captured by the Externals this issue, setting up a plot for the following one. 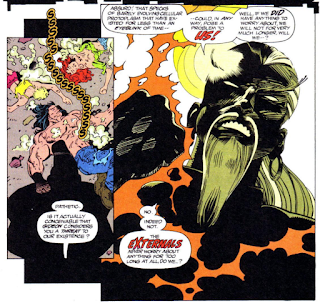 Deadpool appears briefly, his first since issue #15, on the trail of Vanessa. 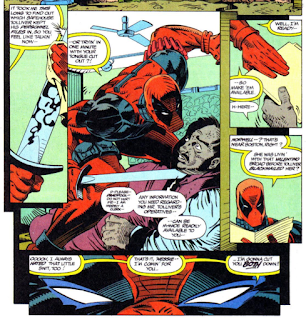 Both the cover and narration refer to James Rhodes as "War Machine" in this issue, the sobriquet he assumes after Tony Stark reveals he's faked his death and starts using a red-and-gold Iron Man suit again, which happens in the issue of Iron Man published the same month as this issue.

A Work in Progress
On the title page, a scan of X-Force by War Machine provides a nice bit of exposition on what each of the title characters' powers are in a subtle way.

It's established that War Machine, who is basically Iron Man with extra guns attached, is using rubber bullets in this issue.

At one point Siryn flies up into the air to check out X-Force's base, and does so without any indication she's screaming. Technically, both Banshee and Siryn's flight is dependent on their screaming, and while this is hardly the first time either character has been shown flying without an accompanying scream, it stuck as a fairly egregious example in this issue for whatever reason. 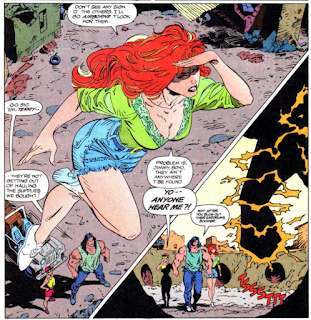 As they work to save Graymalkin, Sam declares his hope that the place represents Cable leaving X-Force something of substance. 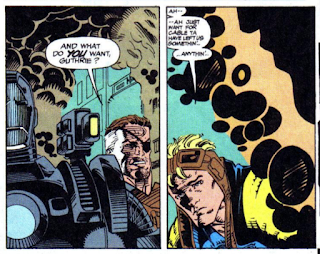 He also adds that regardless, Professor is Ship, and Ship is their friend. 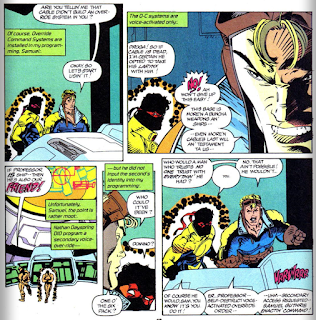 Professor says that in Cable's absence, he wants Sam and Roberto to help him decide what to dump and what to keep, as they like sons to Cable. 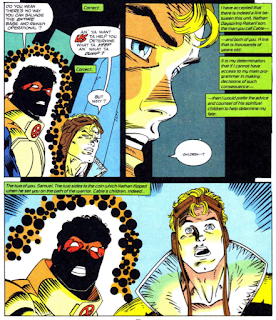 In the end, Sam jettisons both the weapons depot and the cargo bay to X-Force's base (thus enabling the team to have continued access to assorted equipment in future issues), while dumping the Time Displacement Core, the device via which Cable travels through time, into the ocean. 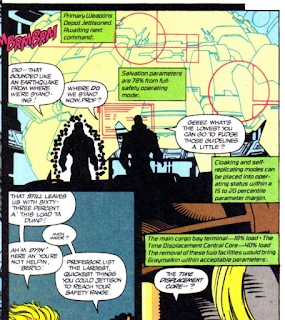 Young Love
As they return from shopping, Warpath is checking out Siryn. 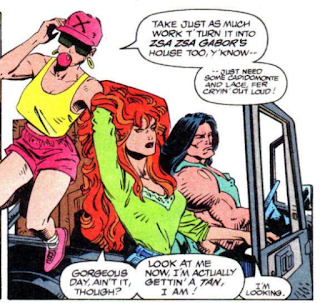 The Reference Section
Vanessa and her roommate visit a bar that is a clear pastiche of Cheers. 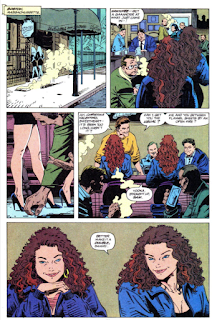 For Sale
The Entertainment This Month ad hypes X-Men Unlimited #1, giving us a shot of its cover for the first time and touting its high quality, glossy paper.

Austin's Analysis
The "Graymalkin as a representation of Sam's grief for Cable" subtext from last issue quickly becomes text here, as Sam outright declares he views the place as Cable's legacy to the team, pinning his hopes that Cable left them something worthwhile on the station's survival. Beyond that, Nicieza ramps up the tension effectively throughout the issue, as X-Force manages to defeat Iron Man/War Machine, only to discover their fight has significantly damaged Graymalkin, after which Lila returns to teleport them to safety, only to discover Sam and Roberto are missing. Graymalkin can be saved, but they need an override code. Sam realizes he has authorization, but in order to save Graymalkin, they have to eliminate any chance, however slim, that Cable could return. It's adding tension on top of tension, and tensions beyond just "will the characters survive?" (which is good, because we fundamentally know they will), which makes for an exciting read, even if it's a little less subtle than the previous issue.

Next Issue
Tomorrow, Shadowcat breaks free in Excalibur #64. Next week, the return of John Romita Jr. in Uncanny X-Men #300, and more fun in Genosha in X-Factor #90.