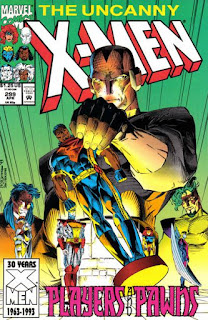 Plot
In Kuwait, Forge and Gyrich inspect wreckage which Forge determines to be the remains of Asteroid M, and inside, they are stunned to discover Magneto's body missing. In New York, Jean helps Professor X prepare for a televised debate on human/mutant relations with Senator Kelly, while Archangel checks on Teddy, the young boy recently targeted by the Acolytes. Xavier & Kelly are joined by Graydon Creed, leader of the anti-mutant Friends of Humanity organization. Watching the broadcast with his fellow Upstarts, Cortez is incensed that Creed is a member of the Upstarts. Shortly, Beast joins the televised debate, and quickly gets under Creed's skin, much to the delight of the X-Men watching from Harry's Hideaway. As the debate concludes, Xavier finds he and Kelly have more in common than they thought, a sentiment similarly expressed by Kelly's telepathic aide. Outside the TV studio, Cyclops tells Xavier that the Blackbird is ready to go; the Acolytes have been traced to France, and the X-Men are taking the fight to them.

Firsts and Other Notables
Graydon Creed, who previously appeared in Stryfe's Strike Files, makes his first in-story appearance this issue, appearing as the anti-mutant pundit on a televised debate. Along with Creed, his organization, the Friends of Humanity, is mentioned for the first time. Both Creed and the Friends will play a significant role in the franchise over the next few years (and are also heavily featured in the early seasons of the animated series). 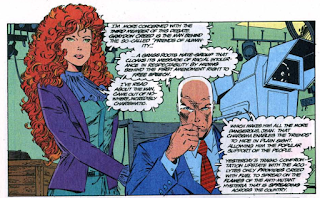 The Upstarts make something of a return this issue, with Shinobi Shaw, Fitzroy and the Gamesmaster all returning. It's also revealed that Fabian Cortez is a member (something else previously established in Stryfe's Strike Files), as is Graydon Creed, something which bothers Cortez (due to Creed being human and anti-mutant). I also love how clearly tired Shinobi & Fitzroy are of Cortez bragging about killing Magneto. 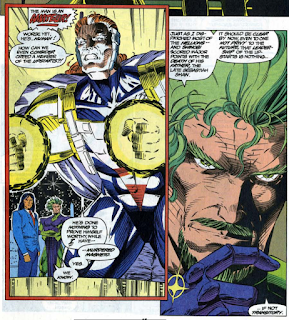 In the process, we get something of an origin for the Upstarts (they're bored and this is a way to have some fun), and another take on what the "prize" of the Upstarts contest to accumulate points by killing people (the willing services of the losing contestants). 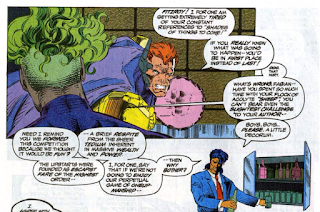 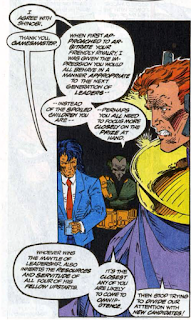 When Cortez complains that the Upstarts are becoming to large a group, the Gamesmaster declares that the candidate Fitzroy has been secretly grooming will be the last member of the group. This is a reference to Sienna Blaze (who also already appeared in, that's right, Stryfe's Strike File), who will make her first proper appearance in X-Men Unlimited #1. 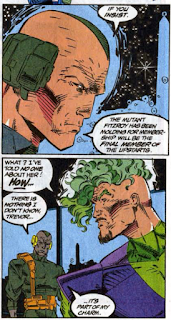 Continuing to tease the return of Magneto, this issue reveals that Asteroid M has crashed to earth in the wake of the attack on it in X-Men #3. The fact that it landed mostly intact suggests someone (possibly with magnetic powers) must have helped guide it to the ground. Additionally, inside the asteroid, bodies of the previous Acolytes are found, but Magneto's is missing, with only his shell-like armor in place. 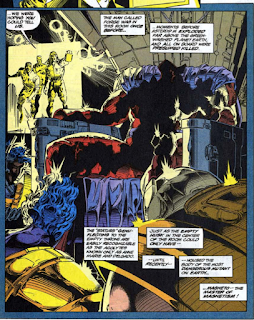 Forge, making his first appearance since leaving the X-Men in issue #290, is on hand to help investigate the Asteroid M wreckage on behalf Henry Gyrich. 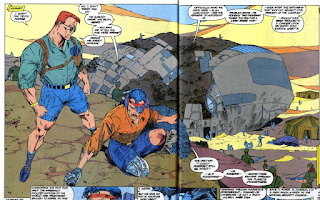 This issue marks the beginning of an effort to humanize Senator Kelly (who, prior to last issue, was last seen ranting and raving about mutants at the end of issue #281). He spends much of the debate agreeing with Xavier, at least in general, and refuses to take the bait when Creed brings up the death of his wife (Sharon Kelly, who died during Master Mold's attack in issue #246). 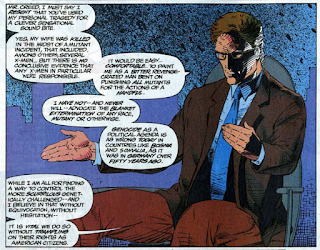 Remember the Mutant Registration Act, the piece of legislation which required mutants to register with the government, which at least in part informed the events of "Fall of the Mutants" and was used as promotional contest prior to the beginning of that story, then was quietly forgotten? This issue establishes that, ultimately, the government declined to fully enact it.

Watching the debate at Harry's Hideaway, Bishop notices a waitress who seems familiar to him; she will eventually be named Pamela Greenwood, and after that, she will turn out to be Fatale, an agent of the Dark Beast who will first appear after "Age of Apocalypse" and will be retroactively established as being the waitress here (at the time, Lobdell had no definitive plans for the waitress, and just threw her in here as a mystery to be developed later). 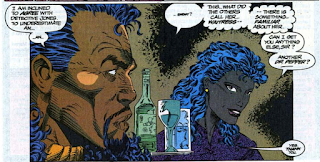 Similarly, as the debate ends, Jean is shocked to discover that one of Senator Kelly's aides is a telepathic mutant. He will later be established as Noah DuBois, an agent of the interdimensional law firm Landau, Luckman and Lake, appearing in some later issues of Wolverine and Deadpool's solo series. 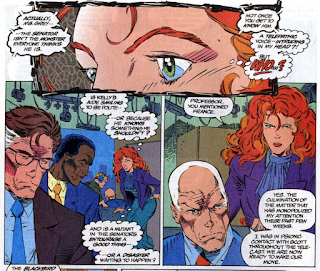 The Chronology Corner
Obviously, this issue takes place after X-Men #19, since Colossus and Illyana are back at the mansion (and Iceman is at Harry's Hideaway).

A Work in Progress
Xavier notes that, in the wake of Stryfe's assassination attempt at the start of "X-Cutioner's Song", he has gone from being a noted if reclusive genetics expert who runs a private school to a being considered a mutant rights activist. 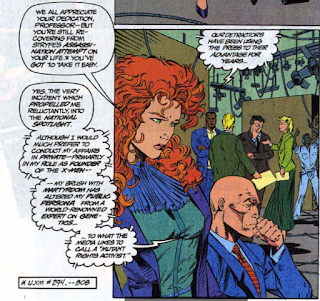 Back in the mansion following the events of the Soul Skinner story, Illyana, somewhat ominously, is heard coughing before a sweet moment between her and her brother.

Charlotte Jones is hanging out with the X-Men at Harry's Hideaway as they watch Xavier's debate.

Beast, who is most famous in the Marvel Universe for being an Avenger, appears on the debate show as well; whether intentional on Lobdell's part or not, he is presented as being gregarious and funny, which matches how he was often presented while on the Avengers. 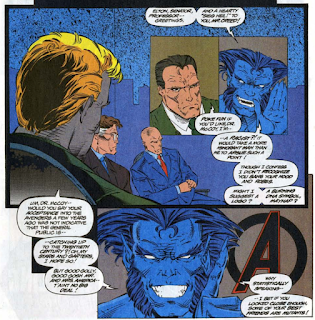 Storm proposes a toast to those the X-Men have lost, naming a few (including Cable), then adding "to name but a few". But, she lists pretty much every X-character to have died at that point. 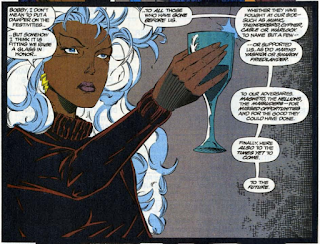 The issue ends with Xavier and the X-Men (the Gold team plus Cyclops and Wolverine) departing for France, the purported location of the Acolytes new base, setting up next issue.

The Grim 'n' Gritty 90s
Upon seeing Xavier and Kelly talking cordially to one another, Jean declares, "welcome to the 90s".

Human/Mutant Relations
Archangel once again chides the Acolytes for their response upon learning Teddy has Downs Syndrome, saying diversity should be celebrated. 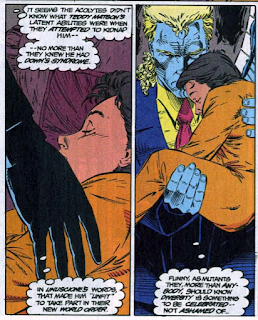 Xavier points out that the vast majority of mutants live quiet, peaceful lives, afraid they'll be exposed and confronted with the kind of hate Creed is peddling. 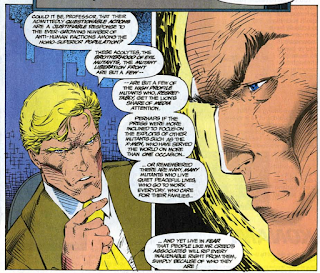 Xavier also points out (and Kelly agrees) that one need not be a mutant (or a member of any other marginalized group) to be sympathetic and supportive of that group's plight. 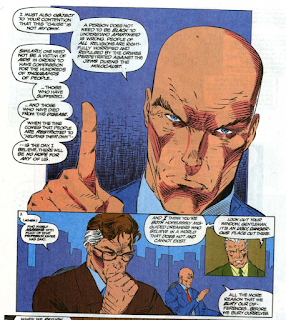 Austin's Analysis
Like the previous issue, this one manages to cover a lot of ground in and around a central, relatively self-contained plot (here, the televised debate between Senator Kelly, Xavier, Graydon Creed and Beast). Around that narrative spine, Lobdell continues to tease the return of Magneto via the landfall of Asteroid M and the reveal of Magneto's missing body, begins shifting Senator Kelly's politics to be more moderate, introduces Graydon Creed and the Friends of Humanity, and, in true Lobdellian fashion, tosses out a couple of mystery characters to be dealt with later (Kelly's telepathic aide and the waitress Bishop recognizes).

Most interestingly, he also resurrects the Upstarts plotline, Given it was introduced as the key plotline of the future Image founders, and was designed, in part, to push aside older, more established villains, it would have been easy to simply ignore it and let it die on the vine in the wake of the Image Exodus, but Lobdell brings it back here, establishing Creed and Cortez as members, further teasing the debut of Sienna Blaze, and offering his own take on the point of the whole thing (something Lee and company never really managed to do definitively). Along with everything else going on in the next few issues, Lobdell continue to play with the Upstarts, before handing them off to Nicieza to put them to bed for good. Bring them back is a curious decision, but the ultimate closure is nevertheless appreciated.

Next Issue
Tomorrow, we say goodbye to Peter David in X-Factor #89. Friday, we meet Epsilon Red in Wolverine #67. Next week, X-Men #19.