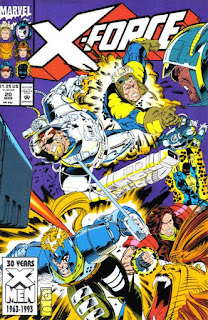 Plot
When a Stark satellite accidentally uncloaks Graymalkin, Cable's space station, in orbit around Earth, SHIELD is called in to investigate, but Nick Fury is forced to cut a deal with Jim Rhodes, who claims salvage rights to the station, in order to go aboard. In Arizona, X-Force catches a news report about the station, and Sam orders Lila to teleport the team onboard. Meanwhile, Vanessa emerges from her room, having taken the form of her roommate, Domino enlists the help of Grizzly in locating X-Force, and the X-Ternal Nicodemus succumbs to a mysterious illness. In space, Nick Fury leads a SHIELD team onto Graymalkin. Intending to protect Cable's legacy, X-Force attacks and defeats them, only to find themselves face-to-face with Iron Man.

Firsts and Other Notables
To his credit, Cannonball (and to a lesser extent Rictor & Sunspot), upon boarding Cable's space station and being greeted by Professor, immediately recognizes him as Ship, yet another blisteringly-obvious but still-technically-a-hint that Cable is related to Nathan Christopher Summers in some way. 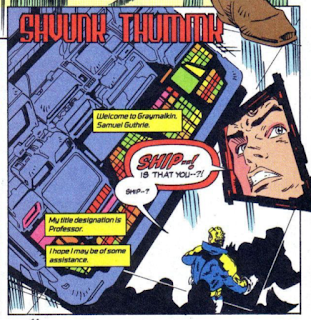 Upon learning that Professor first came online in the future, Cannonball is shocked; while Bishop and Wolverine learned Cable was from the future in "X-Cutioner's Song", apparently they didn't share that information with X-Force, marking this as the point at which Cannonball realizes Cable is a time-traveler. 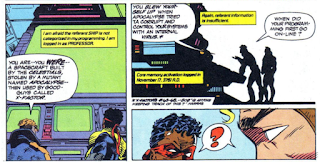 Iron Man guest stars in this issue, however, this story takes place during the relatively narrow window of time in which Tony Stark is believed dead (he's faking it), Jim Rhodes is running Stark's company and operating as Iron Man, AND he's operating as Iron Man while using what will later become his War Machine armor (as opposed to a regular red/gold Iron Man suit). So it could be argued that War Machine guest stars in this issue. 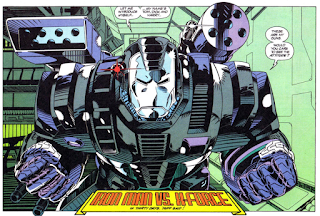 External Nicodemus (it's okay if you don't remember him) dies this issue after suffering a mysterious illness; this will later be attributed to the Legacy Virus, making him the first of its on-panel victims. 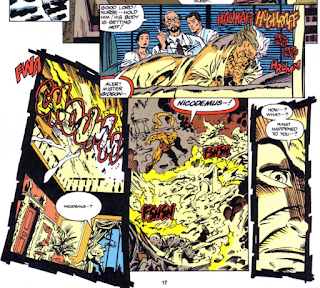 Warpath, Siryn and Boomer sit this issue out (they're said to be away gathering supplies, but presumably, Nicieza wanted the SHIELD team to pose more of an obstacle for X-Force, so he cut the team's size a bit).

Domino (the real one), last seen in issue #15, pops up briefly, seeking out Grizzly (last seen as a member of Weapon: Prime) to get his help finding X-Force, which she had promised Cable she would do. 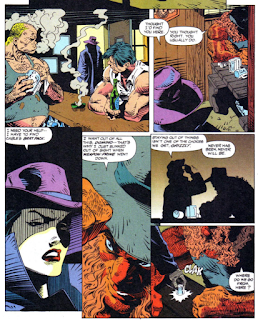 A Work in Progress
Bridge is reinstated into SHIELD this issue, in order to help Nick Fury investigate Graymalkin, which makes one wonder why Nicieza bothered to have him quit last issue. 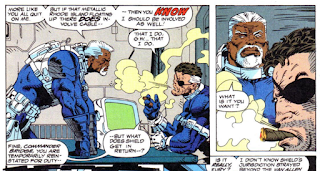 Lila Cheney is still hanging around with X-Force, and helps teleport them aboard Graymalkin.

Shatterstar proves to be electronically/mechanically-inclined; when his teammates ask why he never told them about those skills, he says they never asked, echoing Wolverine's earlier line about the X-Men and his real name. 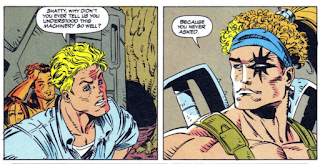 In another brief check-in with Vanessa, we see that she's morphed into the form of her roommate, with the implication being that her power works unconsciously so that she changes into whomever she's around for prolonged periods of time. 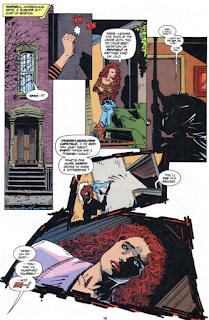 Bridge and Rictor, who worked together as part of Weapon: Prime, share a moment together. 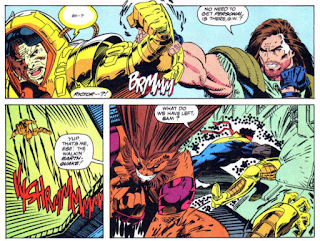 Cannonball apologizes to Nick Fury after blasting into him, a nice display of his continued respect for authority figures even as he leads the rebellious X-Force. 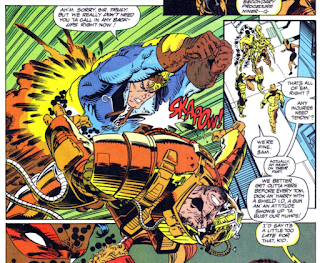 The Grim 'n' Gritty 90s
Both Hard Copy and Geraldo get name-checked.

It's in the Mail
A response to a letter in this issue mentions the upcoming Cable solo series, the first time the series has been mentioned in X-Force (outside of ETM ads).

Austin's Analysis
Two things Nicieza does well during this brief period between Cable's death and his return is establish Sam as an effective, capable leader (so much so that when I first read New Mutants retroactively, I was put off by the notion that he and Dani were co-leaders of the team, since I knew Cannonball as a leader on par with Cyclops & Storm; now, of course, I also know Dani is the bomb) and to establish the depth of Sam's grieving for Cable and Cable's role as mentor to Sam. The latter is on full display here, as Graymalkin emerges as both a giant floating symbol of Sam's grief and is positioned (at least in Sams' mind) as Cable's legacy to X-Force. In hindsight (heck, even if at the time, if you were paying attention to ads and solicits), we know Cable will be back soon. But the characters don't, and Nicieza uses that to his advantage.The end result helps make Cable's death, however short-term and/or editorially-mandated, seem like it matters, at least to the characters if not the readers.