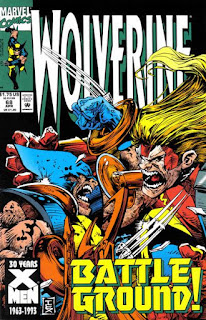 Plot
Wolverine confronts Epsilon Red, and still thinking it's the 1960s, recalls their last encounter, in which he was sent to kill the Soviet astronaut. The memory causes him to come to his senses and realize the correct year, and Epsilon Red says that he's using his psi-talents to help Wolverine remember. With his help, Wolverine recalls the original "Terry Adams" mission, in which he was meant to kill Epsilon Red to stop him from getting to the moon before the Americans, but was called off when the US landed a man on the moon. He thanks Epsilon Red for clearing up his memories, then helps him board a space shuttle and return "home" before being picked up by the X-Men. As they leave, one of the Russian guards ask Epsilon Red's daughter Elena why she used her telepathic powers to show Wolverine what she did; she tells him she left out part of the mission, when Sabretooth arrived and killed her mother, and that while inside Wolverine's head, she was able get some clues to Sabretooth's whereabouts, so she can track him down and kill him.

Firsts and Other Notables
This is Mark Texeira's last issue as the series' artist, as he departs to work on the Sabretooth limited series. Larry Hama has said that his run was never meant to be permanent, that it was something he did to kill time before Sabretooth. True or not, in the wake of his departure, the series will go without a new regular or even consistent artist for the next half dozen issues, before Adam Kubert comes aboard with issue #75 and begins a lengthy multi-year run.

Mentioned last issue, this issue marks the first appearance of Epsilon Red, a Russian super astronaut. Like the similarly-named Omega Red, Epsilon Red has tentacles of a sort, which seem to be tools (presumably to help him in space). He also leads Wolverine to believe he has telepathic powers, but they, in fact, belong to his daughter Elena. And after all that, don't get too attached to the guy, because he dies at the end of the story and has yet to appear again. 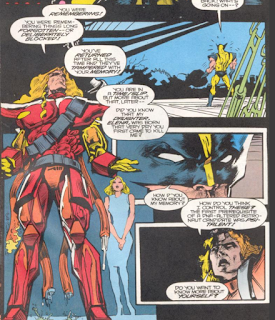 It's revealed that Epsilon Red's daughter Elena is telepathic, and that she orchestrated Wolverine's return to Tyuratam in order to comb his mind for clues about Sabretooth, on whom she wants revenge for killing her mother (Wolverine's memories show that while the hit on Epsilon Red was recalled in the wake of Neil Armstrong beating the Russians to the moon, Sabretooth decided to kill Epsilon Red's wife anyway, leading to Elena being born via C-section after her mother died). 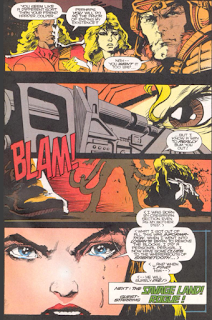 Elena's next appearance are in the Maverick solo series, but I have no idea if her grudge against Sabretooth is picked up there, or simply forgotten.

After picking up Wolverine at Tyuratam, the X-Men tell him they're making a short stop in Russia, thus transitioning them into the events of X-Men #17-19 (which begin with this group of X-Men flying to Colossus' home from Tyuratam), though their visit is said to be short here while in the X-Men issues it clearly seems like they intended to stay at least a few days before they got sucked into the Soul Skinner situation. 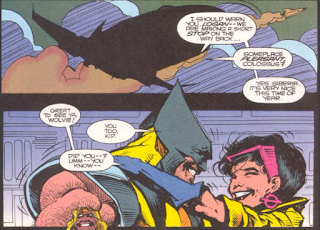 A case could be made that this cover is an homage to X-Men #5, which similarly featured Wolverine in a close-up fight with a Russian super-soldier code-named >Greek Letter< Red.

A Work in Progress
While on Earth, Epsilon Red is forced to wear a containment suit, as his body has been altered to survive in the vacuum of space. 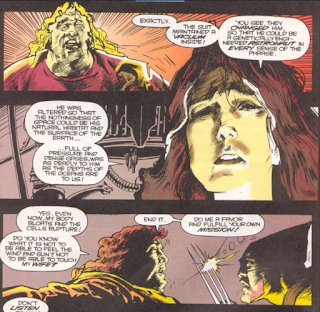 Epsilon Red describes Wolverine's mind as being clogged with false memories and mental blocks, some of which were placed in his mind by his own subconscious for his own protection, a precursor of the later idea that at least some of Wolverine's memory problems come from his healing factor wiping out bad memories in an effort to "heal" his mind. 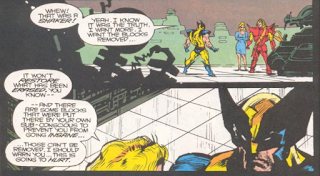 In the end, Epsilon Red (by way of Elena) manages to unlock some of Wolverine's memories, though his memory problems are far from over and he still doesn't have full recollection of his life or the knowledge of exactly what he remembers is real and what is fake. 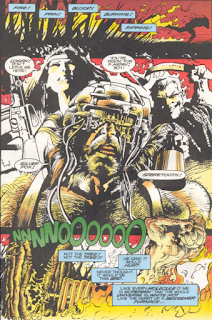 Austin's Analysis
The conclusion to the three part Terry Adams/Epsilon Red/Wolverine-go-crazy story is also the best of the three partx, mostly because it is the most coherent and straightforward. It's still not terribly exciting, as the whole thing just turns out to be an excuse to play around in Wolverine's head and maybe, for real this time, settle some of his memory issues (and set up a confrontation with Sabretooth that never really comes to fruition). The idea of exploring Wolverine's past isn't inherently bad, and the jumble of memories can make for some trippy scenes (and convenient retcons).

But after after the initial Shiva story in issues #48-50, the Psi-Borg story, and now this, "Wolverine's past" is an area in which Hama has spent far too much time, with diminishing returns. Thankfully, he seems to have recognized this, as he will shortly move on to other things in preparation for one of the biggest status quo upsets in the character's history, while the juxtaposition between Epsilon Red and Wolverine (both mutants transformed into something more than human in service of their governments) here allows this extended trip down memory lane come to a close with something of a happy ending. But the important takeaway from this issue is still that all the memory stuff is, for now.
Newer Post Older Post Home
Posted by Austin Gorton at 12:00 PM