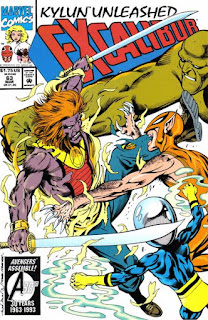 In a Nutshell
Kylun & Captain Britain are targeted as Excalibur reluctantly aids the RCX.

Plot
Awakening from a dream about his time on Ee'rath, Kylun marshals the courage to reunite with his parents, only to be attacked and captured by the Seraphim as he reaches their door. Meanwhile, at Cloud Nine, in lieu of imprisoning the captive members of Excalibur, Nigel assigns each of them a Warpie guide who neutralizes their power. He shows them around the facility, revealing that he needs their help battling a disease that is targeting parahumans. Nightcrawler offers Excalibur's help however they can. Elsewhere, Phoenix, grappling with the guilt of killing unborn life, encounters Death, who suggests the solution is to let go of being human. At Cloud Nine, the RCX tests' Nightcrawler's powers, and realize he is showing signs of having contracted the disease. At the coast, Captain Britain's powers mysteriously return, just as another group of Seraphim confront him and Meggan. They tell him to surrender, or else. Captain Britain chooses "or else".

Firsts and Other Notables
After being absent since shortly before Sat-yr-9 and Jamie Braddock's attack on the team, Kylun returns this issue, though he doesn't interact with any of the regular characters.

Nightcrawler performs a demonstration of his abilities for the RCX, leading the RCX to theorize that, due to the different ways his mutant abilities manifest themselves (including teleportation, his physical differences, and the ability to cling to walls), he may be a second-generation mutant; this will eventually turn out to be true, once it's confirmed that Nightcrawler is the son of Mystique. 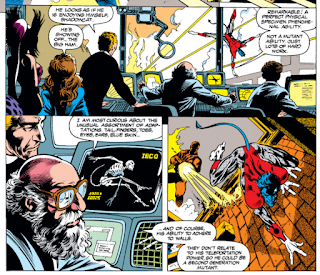 This issue reveals that the RCX is investigating a virus targeting "parahumans" (their term for people with super powers, not just mutants, since the Warpies technically aren't mutants), which causes their powers to burnout before killing them. This is not unlike the nascent Legacy Virus plotline in the other X-books, which also features a virus targeting mutants that will (in some iterations) cause their powers to burnout before killing them, but as far as I know, this virus is unrelated to that (I don't believe this plotline extends beyond this immediate story), the similar storylines a mere coincidence brought on by the fact that Excalibur still exists outside the editorial X-office at this time. 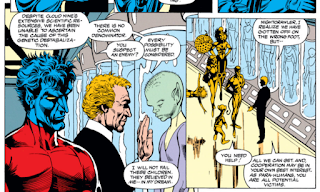 Somewhat curiously, the Direct Market editions of this issue feature the Avengers' 30th Anniversary logo in the bottom cover box, rather than the X-Men 30th anniversary one.

A Work in Progress
Cerise learns the concept of children and human procreation in this issue. 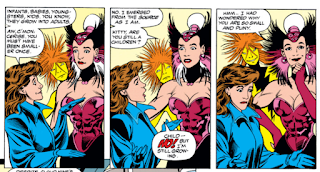 When Phoenix encounters Death in this issue, one of the forms Death takes is a construction worker, the same form as in the Classic X-Men backups when the Jean Grey Phoenix encountered Death. 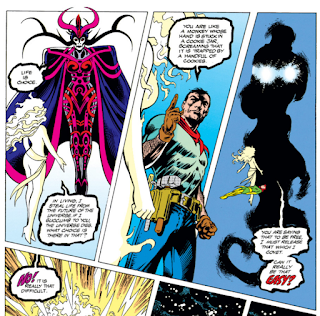 Nightcrawler receives a new costume from one of the Warpies this issue, though I don't believe it last beyond this story. 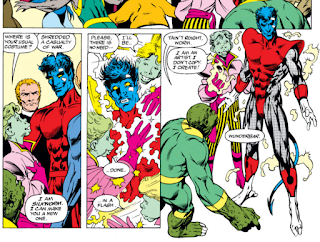 As part of Nightcrawler's demo for the RCX, it's said that his agility is not tied to his mutant powers, but his whole "invisible in shadows" thing is mentioned again. 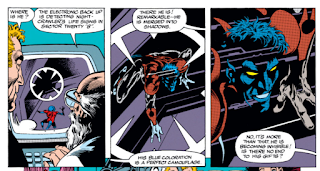 Captain Britain succeeds in restoring his powers this issue, though it remains unclear why they disappeared or how he got them back. Meggan does not that his "look" changed when he was powerless, something she was reluctant to point out. The Grim 'n' Gritty 90s
One of the holograms Nightcrawler battles during his demo is a Terminator pastiche. 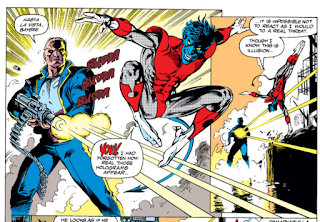 Austin's Analysis
The well-drawn but relatively rote RCX/Warpies story continues here, with the RCX' attack on Excalibur expanding to draw in Kylun, Captain Britain and Meggan. But events back at RCX headquarters, including the continued spotlight on Nightcrawler (who gets to show off his abilities and receives a new costume) made me realize how, thus far, Nightcrawler really is the standout character of Alan Davis' solo run. While Phoenix was the focus of his first sustained story arc, she's been absent for the last dozen issues or so, and even while she was in the spotlight, Davis was still quietly developing Nightcrawler's character in the background. Over the course of his run, Nightcrawler has discovered and developed a knack for leadership, started a new romantic relationship, and been the quiet center of the group as other characters (like Captain Britain and Phoenix) more loudly went through more overt changes. Having never read these issues before, I had always credited Warren Ellis' later run on the series with Nightcrawler's development as a leader relative to his time as part of the "All New, All Different" X-Men (and his short but unremarkable tenure as X-Men team leader during the JRjr. run); this issue made me realize most of that work was, in fact, done by Alan Davis during this solo run.