A quiet week and a short post, as most shows are in reruns in anticpation of February sweeps. I wasn't able to catch the Thursday night shows yet, so they'll be covered in next week's post. 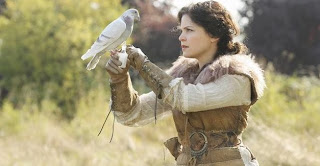 Thanks to this show taking a little mid-winter break and a couple weekend catch-up sessions, I've managed to get current. Like Lost before it, it's become a show where I tend to enjoy one-half of the episode more than the other. Unlike Lost, here, it's the flashbacks that are most compelling (dicey CG and anachronist dialogue aside), while watching Regina be a bitch in the present day can get a little one note (and like Lost, the best episodes are the ones where both halves are compelling, like the episode where we learned the origin of Rumpelstiltskin and Emma ran for Sheriff).

Of the show's various ongoing narratives this episode focused on the one that should be the least enjoyable: the Snow/Charming relationship. In terms of the present day storyline, it's a weak will they/won't with a false start: we know they will, it's just a matter of time, and we also know they won't, really, for awhile, because Regina's hold on the modern world can't unravel that fast. Yet of all the show's ongoing narratives, I find myself enjoying this one the most, as it is kind of fun watching these two dopey characters circle around each other, trying to ignore the tug of the inevitable, while Regina is lurking, always, always lurking, on the edges.

Other Thoughts
The show occasionally reminds us that Mary Margaret is Emma's mother, but little has been made of the fact that David is Emma's father, something I don't think Emma knows/hasn't put together yet.

It was nice to see Red Riding Hood in fairy tale land, instead of just wiping tables in the modern world. In general, I've been enjoying the way the show interweaves different fairy tale characters in the flashbacks.

So Steathly, the ninja 8th dwarf, was both awesome and kinda ridiculous at the same time. Also, at the risk of being politically incorrect, those dwarves aren't very short.

The mysterious new stranger in town is a writer. I condone this show's portrayal of writers as mysteriously sexy, and am curious to see where this is going.

As much as I may be inexplicably enjoying this whole Snow/Charming deal, the symbolism of the dove was pretty heavy handed, even for this show, and while I understand that love, as the saying goes, makes you do the whacky, embracing one another in the middle of the street in broad daylight was pretty dumb. I mean, Regina conveniently being in her car to see it was dumb too, but it isn't like she wasn't going to find out when you're making out in public. 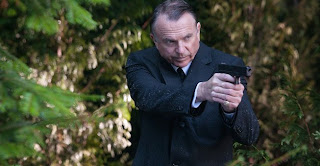 Alcatraz (or "The 'Traz" as my wife and I call it) continues to come out of the gate strong with its third episode. While the format, at least in these early goings, has already been clearly established as "prisoner from the past shows up and Sarah and Doc hunt him down while tidbits of mythology play out in the past and on the edges" the balance between the case-of-the-week stuff and the larger mythology is being nicely maintained. In these early episodes, I don't need a lot of answers, and am fine with more questions getting offered up and teased. For now, knowing that the show is willing to explore that mythology, and isn't afraid to sneak in little cross-episode things like the captured prisoners from the first two episodes or Sarah's grandfather always being behind the curtain in the infirmary, is enough to support the weekly cases.

This week's case was, perhaps, the most manipulative yet (I mean, child endangerment is a pretty easy way to get people invested in the story), but it succeeded on the strength of the performance of Kit Nelson, who was great at being being creepy and quietly menacing. The scene between him and the warden, in which he confessed to killing his brother, was fantastic (and of all the show's various mysteries, I'm especially curious as to how involved the warden is in everything; I wonder if he'll be popping up in the present day at episode's end one of these days).

This was also what could be considered a Doc-centric episode, as he was the focus of the investigation and we learned a little bit more about his background. I'm not sure if the show intends for there to be more to the childhood incident that made this case so personal for him, but I wouldn't mind if the details go unrevealed and we're just left knowing Doc has been through some shit. At any rate, while I don't think this show can handle Lost's style of character focus, it was nice to see one of the more unique voices on the show get fleshed out a bit. 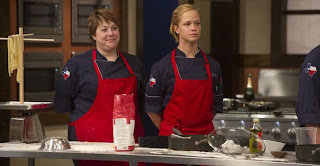 As the numbers continue to dwindle, the episodes get better, and here we got a couple of nifty challenges, forcing the chefs to work together and then against one another. I like that the show continues to feature some form of the mis en place relay race, but finds new ways to shake it up. Chris' departure wasn't terribly shocking, as I didn't expect him to make the finals (as Tom said, he seemed to miss point on execution too often). Meanwhile, this is pretty much Paul's to lose at this point, right? Dude just keeps racking up the wins and/or cash.

Grayson's "like a meatball?" line is in danger of becoming a full on internet meme, at least amongst weird foodie types who watch this show, but she had a point: I didn't feel like there was anything inherently risky or creative about either of the other two selections, and it seems like, at least as edited, that Tom was giving her a much harder time than she deserved for picking chicken salad. I mean, isn't the point to make good food? If her chicken salad was awful, ding her for that, but don't ding her for picking it if it turned out good. It was a block party, not fine dining.
Newer Post Older Post Home
Posted by Austin Gorton at 8:00 AM