Retro Review: Marge Gets a Job 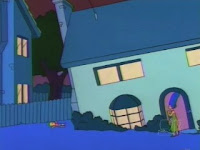 Or the One Where
Marge goes to work at the nuclear power plant, where Mr. Burns falls in love with her.

The Setup
After the foundation of their house cracks, Marge gets a job to pay for the repairs.

Notable Notes
Tom Jones guest stars, and he's said to be one of Marge's favorite singers. This episode was my first encounter with the singer, back in the day.

The song sung in honor of Mr. Burns at the retirement party is another homage to Citizen Kane, and "The Imperial March" from The Empire Strikes Back plays while Mr. Burns watches the security monitors at the plant.

Smithers affection for Burns is ramped up in this episode, as he fantasizes about Burns flying in through his window.

This episode aired the same week as "Itchy and Scratchy: The Movie", in the show's then-regular Thursday night time slot, and did much better for itself, ratings-wise, than the earlier episode.

In the subplot featuring Bart faking a serious of ailments to get out of taking a test, the original broadcast of the episode had Mrs. Krabappel listing Tourette's as one of the diseases Bart has faked, and he insists he's not over it, snarling and saying "shove it, witch!". This led to a lawsuit filed by someone with Tourette's Syndrome, and the producers agreed to remove the scene from future broadcasts. On the DVD release, the scene is intact, but Mrs. Krabappel refers to Bart having had rabies instead of Tourette's.

Finally, this episode is responsible for granting me my internet moniker. Homer tells Marge that if anything goes wrong, just blame Tibor, the guy who doesn't speak English.  Later in the episode, Smithers tells Marge "that damn idiot Tibor" lost the key to her office. The setup/payoff to that joke has always been one of my favorite Simpsons gags, and when it came time, many years ago, to establish an internet moniker, I remembered the gag and the name Tibor, though I had to change the spelling since there were already other Tibors out there. And thus Teebore was born.

Favorite Quotes
Marge: ...worked for the Carter administration?!?
Lisa: Well, you voted for him. Twice!
Marge: Lisa, shh, someone might hear you...

Homer: Now, Marge, just remember. If something goes wrong at the plant, blame the guy who can't speak English. Ah, Tibor, how many times have you saved my butt?

Mrs. Krabappel: Well, then, you're ready for your make-up test.
Bart: Ohhhhhh! My ovaries...

Homer: I'm used to seeing people promoted ahead of me. Friends, co-workers, Tibor... I never thought it'd be my own wife.
Marge: Well, maybe you'd get promoted if you worked a little harder.
Homer: Are you kidding? I work like a Japanese beaver!
Marge: Oh, really? I came to see you three times today. Twice you were sleeping, and once you were kicking that ball of electrical tape around!
Homer: Well! I won't sleep in the same bed with a woman who thinks I'm lazy. I'm going to go right downstairs, unfold the couch, unroll the sleeping ba... Eh, good-night.

Bart: Ivanhoe is a story about a Russian farmer and his tool. 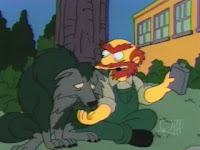 Teebore's Take
This is another one of those episodes I missed recording back in the day, and rarely seemed to get rerun in syndication. As a result, having seen it less than some other episodes, it's always seemed more special to me than it is (and, of course, it carries a special place in my heart for bestowing "Teebore"). This is definitely an episode that, like a lot of latter day Simpsons episodes, quickly abandons its act one setup for another plot. We never return to the issue of the cracked foundation (it's presumably fixed and paid off between scenes), instead settling in, once Marge is at the plant, for a story involving Burns' infatuation with her (which is especially odd given that he spent several days at her home in season two whilst she painted his portrait, and he didn't fall in love with her then). As a result of these plotting issues, this is an episode whose parts are greater than its whole, with most of the best material coming from specific set-pieces and not the main plot, including a great Troy McClure how-to video on foundation repair, the retirement party, Lisa sprucing up Marge's resume, Bart's vision of the Curies dying of radiation poisoning, Krusty getting attack by an eagle on his show ("She must think you're after her eggs./I only ate one!") and the "Bart cries wolf" subplot, which culminates in Bart literally crying wolf when one attacks him.

A great episode with plenty of laughs, and a personal favorite, but some plotting missteps keep it from being an out-and-out classic. 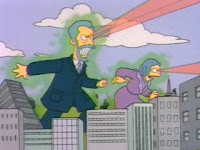