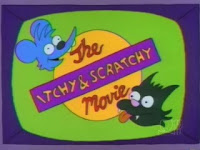 Or the One Where
Bart is forbidden from seeing the Itchy and Scratchy movie.

The Setup
After being admonished by Marge for not punishing Bart hard enough when he misbehaves, Homer finally puts his foot down and forbids Bart from seeing the movie everyone is talking about after Bart leaves Maggie unattended, allowing the baby to drive off in the car.

Notable Notes
This episode marks the first appearance of Bumblebee Man, who will go on to become a recurring, albeit one-note, character (it's rather surprising we've thus far managed to avoid a Bumblebee Man episode). He is caricature of El Chapulín Colorado (The Red Grasshopper), a character from Mexican TV whom the writings were constantly seeing on Telemundo at the time.

Lisa mentions that Dustin Hoffman and Michael Jackson voiced characters in the Itchy and Scratchy movie under fake names, a reference to both performers' previous appearances on The Simpsons, for which both used fake names.

This episode first aired on Tuesday, November 3rd 1992 (instead of the usual Thursday night), as Fox hoped to gain increased ratings for the episode by airing it opposite the coverage of the presidential election that the other broadcast networks were running. It didn't work, as the episode finished with lower numbers than the usual Thursday night audience (though still with higher ratings than most shows get these days). 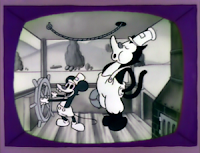 Favorite Quotes
Marge: Now be good for Grampa while we're at the parent-teacher meeting. We'll bring back dinner.
Lisa: What are we gonna have?
Homer: Well, that depends on what your teachers say. If you've been good, pizza. If you've been bad... uh... let's see... poison.
Lisa: What if one of us has been good and one of us has been bad?
Bart: Poison pizza.
Homer: Oh, no! I'm not making two stops!

Homer: If you don't start making more sense, we're going to have to put you in a home.
Grampa: You already put me in a home.
Homer: Then we'll put you in the crooked home we saw on Sixty Minutes!
Grampa: I'll be good

Marge: Do you want your son to become become Chief Justice of the Supreme Court, or a sleazy male stripper?
Homer: Can't he be both, like the late Earl Warren?
Marge: Earl Warren wasn't a stripper!
Homer: Now who's being naive?

Homer: You know, when I was a boy, I really wanted a catcher's mitt, but my dad wouldn't get it for me. So I held my breath until I passed out and banged my head on the coffee table. The doctor thought I might have brain damage.
Bart: Dad, what's the point of this story?
Homer: I like stories

Marge: Homer, I'd like to talk to you.
Homer: But then I won't be watching TV! You can see the bind I'm in. 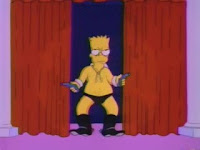 Teebore's Take
For whatever reason, I've never been a terribly big fan of this episode. It's not bad, and it did make some notable contributions to my personal lexicon (the opening, featuring Star Trek XII: So Very Tired's Kirk exclaiming, "Again with the Klingons!", as well as Homer's classic "You can see the bind I'm in" are both quotes I use on a regularly basis), but it's always felt like a step down from some of the other classic episodes that populate this season. Maybe it's because this episode doesn't work on as many levels as other classics, or that I've never been a huge "Itchy and Scratchy" fan. Perhaps it's because, having first watched this as a kid, I've always felt Bart's punishment was too unfair to fully enjoy it (I never had a problem with Homer banning him from seeing the movie while it was popular, but I feel like after a few months of that, when nobody else was talking about it, Bart could have been allowed to see the movie and he'd have still learned his lesson). Or maybe it's because, in retrospect, Bart doesn't learn his lesson, as, given the nature of TV, he'll soon be back to his old tricks, and eventually leaving Maggie unattended will prove to be the least of his antics, and thus, all of Homer's efforts in this episode seem, in retrospect, a waste of time.

A solid episode, but one which isn't quite as transcendent as many of the other episodes this season. 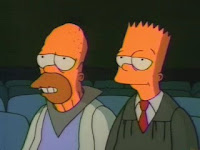