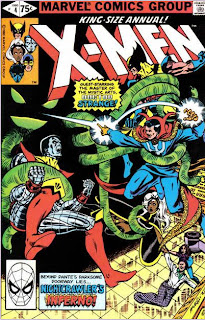 In a Nutshell
The X-Men fight their way through a facsimile of Hell as depicted by Dante.

Plot
The X-Men throw Nightcrawler a surprise birthday party, but when he opens a present from an unknown sender, it explodes and puts him in a coma. Unable to revive him via traditional methods, Professor X calls in Dr. Strange, who realizes that Nightcrawler's soul has been taken. Just then, a sorceress named Margali appears and summons a tentacled creature which pulls Dr. Strange and the X-Men into darkness. They awaken, along with Nightcrawler, outside a massive gate which Dr. Strange recognizes as the entrance to Hell. They enter and come before Minos, guardian of the gate of Hell. He tells the X-Men that Nightcrawler broke the rules laid out upstairs, and tosses him into a deep pit. Storm flies after him, and pulls Nightcrawler up far enough that he manages to teleport away, but Storm is attacked by Harpies and falls into the pit herself.

The X-Men proceed through the various levels of Hell in search of Storm before finding her on the level reserved for thieves. Reunited, they come before Satan, but a suspicious Dr. Strange reveals Satan to be Margali, who asks why the X-Men have come before her. Suddenly, a woman Nightcrawler recognizes as Jimaine and who calls Margali her mother appears before them and explains that she brought the X-Men to Margali. Jimaine is transformed into crystal by Margali, but Dr. Strange engages Margali in mystical combat before Nightcrawler puts a stop to it. Margali insists on taking Kurt's life in exchange for the one he took. The X-Men protest Nightcrawler's innocence, and Dr. Strange uses the Eye of Agamotto to show Margali, Nightcrawler's adopted mother, the truth: as children, Nightcrawler swore a blood oath with his adopted brother Stefan that should Stefan ever take an innocent life, Nightcrawler would kill him to prevent him committing even greater evil. Years later, Nightcrawler was forced by his oath to do just that, though it left him heartbroken. Realizing her error, Margali apologizes to Nightcrawler and transports the X-Men back to their mansion. She also restores Jimaine, Nightcrawler's adopted sister and childhood sweetheart, who reveals herself to be Nightcrawler's girlfriend Amanda Sefton. She explains that she never believed he could have killed Stefan in cold blood, and got close to him as Amanda in order to learn the truth, but remained unable to sway their mother. Intrigued by Margali's power, Dr. Strange looks on as an overjoyed Nightcrawler and the rest of the X-Men continue their celebration.

Firsts and Other Notables
This is really the closest thing yet to an origin issue for Nightcrawler, as we learn he was found abandoned as an infant (this issue says he was found alongside his dead mother; later stories will retcon that detail) by a gypsy sorceress named Margali and raised alongside her children as one of her own, as part of their traveling circus. As he grew older, he fell in love with his adopted sister and swore a blood oath with his adopted brother that he would do anything to stop his brother should his brother give in to his darker impulses. When his brother did exactly that and committed a series of murders, Nightcrawler was forced to kill him, but ended up getting blamed for the crimes his brother committed and attacked by nearby villagers, which formed the angry mob from which Nightcrawler was fleeing when Professor X found him in Giant-Size X-Men #1. 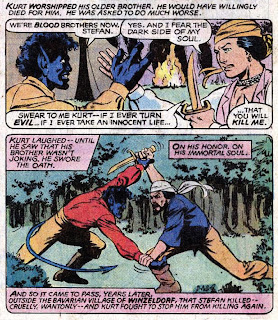 The big reveal here is that Nightcrawler's stewardess girlfriend, Amanda Sefton (who's been hanging around the edges of the story off and on since issue #98) is actually his childhood sweetheart/adopted sister Jimaine (and is also a sorceress, because sure, why not?). Though no explanation is given for why she didn't use her sorceress powers to escape or help the X-Men when she was captured by Arcade in issue #124. 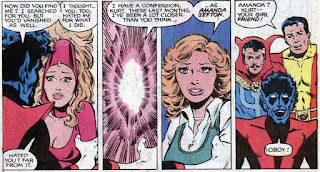 This is also the first appearance of Nightcrawler's adopted mother, Margali Szardos, who will go on to be a recurring but relatively minor character throughout the years.

This issue guest stars Dr. Strange, Marvel's master of the mystic arts, making his first appearance in the book since issue #33 back in the Silver Age. Claremont was also writing Dr. Strange's book at this time. 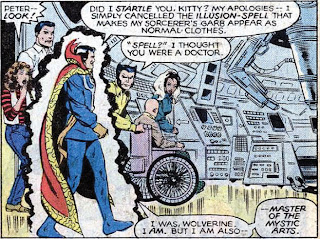 John Romita Jr. makes his X-Men debut, penciling this issue, though it's still early in his career and it will be some time before he's assigned to be the book's regular artist. As such, the art here is pretty unremarkable, with only a few glimmers here and there of his later style. His pencils are inked by Bob McLeod, who will go on to co-create the New Mutants with Claremont.

A Work in Progress
Nightcrawler is celebrating his 21st birthday as the issue opens, and his presents hilariously include a framed picture of Wolverine (wearing his mask). 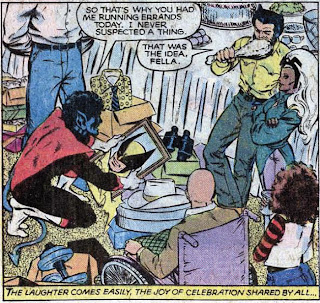 It is revealed that Storm has been named leader of the X-Men in Cyclops' absence.

Colossus mentions that he was raised as an atheist.

Kitty mentions that Nightcrawler skeeves her out for the first time. 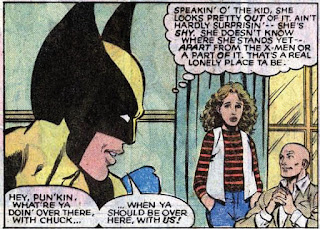 Nightcrawler's Christianity is revealed this issue, and though it's never overtly stated, later stories will reveal Nightcrawler to specifically be a rather devout Catholic, and Margali's choice of Dante's Inferno to torment him in this issue can, retroactively, be seen as an early indication of his faith.

I Love the 80s
Storm somehow knows exactly what a Harpy is...

Nightcrawler has to restrain himself in Kitty's presence. 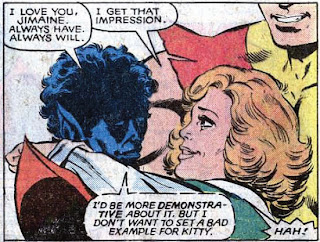 Claremontisms
Throughout his long run on the book, Claremont becomes notorious for complicating the back-stories of even the most seemingly-mundane or minor characters. It's been said that no one can ever just be one thing in a Claremont comic, and we get our first real example of that here, as it's not enough that Nightcrawler's girlfriend is a stewardess, she also has to be his adopted sister/childhood sweetheart in disguise. And then it's not enough that Nightcrawler's stewardess girlfriend is also his sister and childhood sweetheart, but she also has to be a sorceress.

We also get a key Claremont phrase in this issue: we stay, we fight, we'll win. The particular three beat construction of the phrase will become something of a trademark of his X-Men writing. 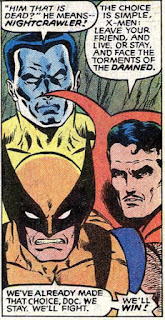 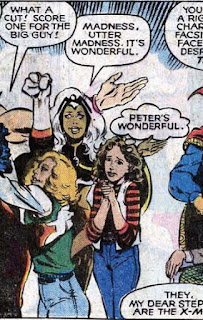 It's in the Mail
The letter column in this issue (a rarity for annuals) features early reactions to issue #137, such as:

Roger Stern on Claremont's plans for Nightcrawler's parentage
"It happened when I was writer of Dr. Strange, back when writers were still occasionally listened to. Chris had come up with the latest of several crazy ideas and declared that Nightcrawler's father was [Dr. Strange archenemy] Nightmare. And I replied with something like, 'No, he's not. I'm not going to let you appropriate one of my character's major villains.' As I recall, Len Wein crossed the room and shook my hand. And not too long after that...I did become the X-Men editor and was able to make sure that didn't happen for long enough that Chris eventually changed his mind."

Callahan, Timothy. "Greatest Stories Never Told: Nightcrawler's Two Dads and the Owl That Could Have Been." Back Issue August 2008: p59.

Teebore's Take
As mentioned before, X-Men annuals not drawn by Art Adams are pretty hit or miss, and this is definitely a miss (though, sadly, still not the worst of the non-Art Adams annuals). While the effort to flesh out Nightcrawler's background is welcome, the end result is an early example of the bad kind of Claremontian excess, saddling the character with a complicated back-story for seemingly no good reason. Perhaps because his original plans for Nightcrawler were scuttled, Claremont never felt passionate about this revised origin, but for whatever the reason, beyond introducing the intriguing idea of Nightcrawler being a Christian and the whole "my girlfriend is my adopted sister is my childhood sweetheart is a sorceress" revelation, this issue largely falls flat.

Worst of all, it commits the most cardinal sin of super hero comics: neither good enough to enjoy on its own merits nor bad enough to enjoy ironically, it is boring. The notion of the X-Men fighting their way through the various levels of Hell as depicted by Dante isn't a bad one, but the execution here is lacking. Romita Jr. doesn't yet have the chops to make the action sequences sing or the magical effects mindblowing, and Claremont seems bored with the story, infusing it with little inspired narration or fun character moments. The whole thing feels very by the numbers, and aside from contributing a couple of historical footnotes to X-Men lore, is largely forgettable.

Next Issue: X-Men #139
We get back to the main book, back to Byrne, and back to Canada, which can only mean one thing: Alpha Flight!
Newer Post Older Post Home
Posted by Austin Gorton at 8:00 AM