In a Nutshell
At her funeral, Cyclops remembers his time with Jean.

Plot
As the X-Men attend Jean Grey's funeral, Cyclops reminisces about his relationship with Jean and their time with the X-Men. Afterwards, Lilandra presents Jean's parents with a holoempathic crystal that carries within it an image of Jean and a recollection of her personality. Cyclops tells Professor X he's leaving the X-Men to think things through and get his head straight, though as the X-Men leave the cemetery, he vows not to crawl back into his emotional shell, as Jean wouldn't want that. Back at the mansion, a cab pulls up and drops off the school's newest student: Kitty Pryde.

Firsts and Other Notables
The bulk of this issue is, essentially, the comic book version of a TV series' clip show, with Scott's reminiscences of his time with Jean essentially recapping the history of the X-Men up to this point. Claremont and Byrne had always planned on this retrospective to comprise the bulk of this issue, and only changed the framing sequence to feature Jean's funeral following their revision of issue #137. 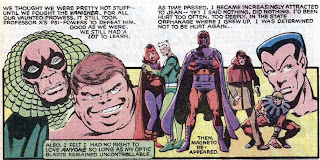 Cyclops leaves the X-Men, marking the first time the X-Men's roster doesn't include any of the original team members (or Cyclops himself, for that matter). 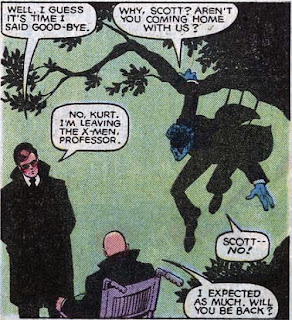 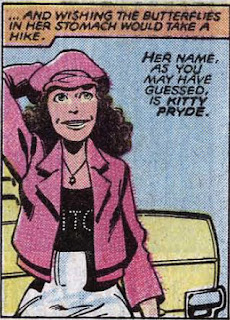 Iceman appears in the book, attending Jean's funeral, for the first time since issue #94.

Though he goes unidentified, Jean's sister Sarah's husband makes his first appearance. Bizarre Adventures #27 will reveal his name to be Paul Bailey.

A Work in Progress
At the beginning of the issue, Scott quotes his declaration of love to Jean, spoken aboard the Blackbird while flying home in issue #129 (of course, neither Scott nor Claremont realized at that time that Jean would be dead in eight issues). 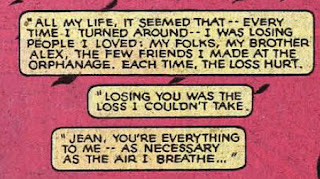 Jean's gravestone lists her date of birth as 1956, meaning she was 24 when she died. It also illustrates Marvel's sliding timeline, as being born in 1956 would mean she was seven when she joined the X-Men in 1963 (the year issue #1 was published). 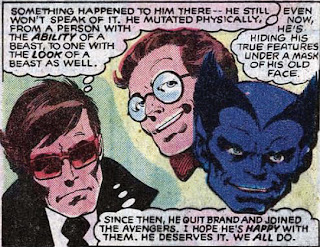 He also recalls the conversation he had with Storm in X-Men Annual #3, about how their lives aren't what they had imagined them to be when they were younger.

Lilandra presents Jean's parents with a holoempathic matrix crystal, a device that, when held, will display a 3D hologram of Jean and make the holder feel the essence of her personality. This is its first appearance, and it'll pop up again down the road.

As suggested by his post-funeral jump down from a tree, Nightcrawler spends the issue observing the funeral from afar, a reference to his declaration to no longer use his image inducer to hide his features. Though it's unclear who, exactly, he's hiding from, considering all the attendees are X-Men or Jean's family (who were all hanging out with the X-Men in issue #136). Maybe he's worried about the priest?

Cyclops and Professor X have a nice moment together after Cyclops declares he's leaving the X-Men. 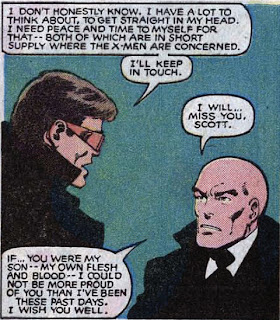 Though the flashbacks in this issue largely retell the events of the preceding 137 issues, Claremont does work a few subtle clarifications and retcons into them. The most significant of these is an expansion of the moonlit stroll Scott and Jean took in issue #32, considered the beginning of their romantic relationship. It also suggests that Scott's reluctance to declare his feelings to Jean had as much to do with his history of abandonment as the danger of his optic blast (and the idea of Scott choosing to be alone in order to avoid getting close to someone only to have that person leave him permeates the flashbacks, culminating in his realization in the present that he is no longer bothered by being alone). This scene also first puts forth the idea that head trauma suffered as a boy after falling from his family's crashing plane is the cause of his inability to control his optic blast.

Additionally, Havok's somewhat random introduction back in issue #54 is smoothed out a bit, as it's established that Scott and Alex were in the orphanage together, but that Alex was adopted while Scott was in a coma as a result of his head injury, and that Scott later asked Professor X to track down his brother before his introduction to the other X-Men. 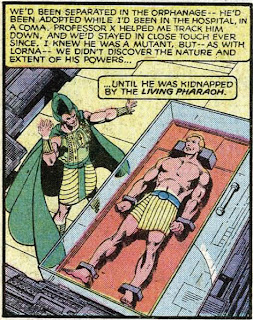 I Love the 80s
The price of comics goes up this issue, from forty cents an issue to fifty, which a surprisingly-cultured Hulk explains. 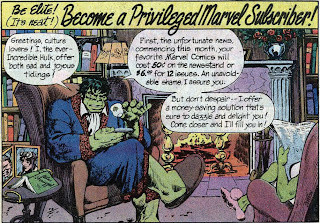 Artistic Achievements.
The last in a run of iconic covers (well, at least for a few issues), as Cyclops walks away from the X-Men in search of that Toys R Us shopping spree. This is a cover that will be homaged several times, by X-Men as well as other titles, chiefly when a character leaves a team.

"Professor Xavier is The X-Men are Jerks!"
Kitty Pryde arrives at the school, excited to be there, then proceeds to sit on the front steps because everyone is at Jean's funeral. They couldn't have told her to arrive the following day (or a few hours later) so someone would be on hand to greet her?

Young Love
Scott and Jean's relationship retroactively gets the proper beginning it deserves.

The Awesome and Terrible Power of Cyclops
Though wracked with pain over Jean's death, Cyclops vows not to crawl back into his emotional shell, determined to live his life as best he can in honor of Jean.

Chris Claremont on Xavier's guilt
"...for the first time in history, in the 20 years of Marvel Comics, a hero team has gone to the wall, has to the death to protect one of their own...and failed. To me the guilt for Xavier is awesome. He awakened Jean's telepathic ability, he brought her into the X-Men. If anybody should feel a sense of responsibility for what's happened it's him because he was off screwing with Lilandra when he could have prevented this."

John Byrne on the popularity and impact of "The Dark Phoenix Saga"
"It was something that had never been done before. Marvel had had lots of bad guys go good, but had never had a good guy go bad. She made this noble sacrifice and then Chris kept referring to it every chance he got for the next ten years, so people were unable to forget how important it was. So, yeah, I think that's the point at which X-Men really started to rise. As I said, that particular issue sold 175,000 copies, which were pretty phenomenal sales back then. I think that particular issue helped destroy the industry because it was the first event, and people have been trying to do events ever since. The thing about the 'Death of Phoenix' storyline was that it wasn't planned as an event. It was a story that grew organically from what we were doing. At no point did we sit down and say, 'We're going to do this huge mother of a story that will sell billions of copies.' We just did the story. Ever since then, everybody's been trying to do their own 'Death of Phoenix'. And because they're trying to do it, they can't. It changed the shape of the industry. It changed the shape of what people were expecting. What the writers and artists were expecting, what the editors were expecting, and what the fans were expecting. Suddenly, that's what it had to be. Suddenly it got people going, 'Oh, this could be the next 'Death of Phoenix', I better buy 1,500 copies of this one.'"

Louise Simonson on getting assigned X-Men
"I've been told any number of things. I was told that Chris was considered difficult to work with and they thought that for some reason he would work well with me. I'm not sure what the deal was with that. I did not find Chris the least bit difficult to work with. He was an utter and complete pleasure to work with. I don't know why I was given X-Men, but I was glad that I was. The stories Chris and John did together were wonderful! I guess there was some conflict between John and Chris, so maybe that was what made some of the other editors uncomfortable."

Teebore's Take
As mentioned above, this issue is the closest thing to a comic book version of a television clip show that I've ever seen, though it does have one advantage over its TV counterpart. Rather than merely reprint panels from previous issues, Byrne and Austin present the entire 17 year history of the X-Men in 17 pages of original art, the television equivalent of filming new footage for a clip show. As a result, via Scott's narration, Claremont gets to smooth over some rough edges left over from the Silver Age stories, giving Scott and Jean's relationship a proper beginning in the process, and we get to see both some of the significant and sillier moments from the X-Men's past rendered by Byrne and Austin, often recreating specific panels or covers (I particularly enjoy the way they manage to make the male X-Men look less dorky in the stuffy suit-and-tie combos the Silver Age artists insisted on putting them in whenever the X-Men went out).

Bookending this retrospective is Jean's funeral and panels which reintroduce Kitty Pryde, a sequence which positions her as the spiritual successor to Jean Grey. Kitty arrives at the mansion just as Jean's funeral comes to a close, buoyed there by taxi, just as Jean was in issue #1. As result, Kitty will for some time exist as a character in comparison to Jean Grey. The message from the departure of Scott and Jean and the arrival of Kitty in this issue is clear: from old life comes new, and no matter how painful it may be, life goes on.

Next Issue: Phoenix: The Untold Story
We jump ahead in time a bit and wrap up "The Dark Phoenix Saga" with a look at what could have been.
Newer Post Older Post Home
Posted by Austin Gorton at 8:00 AM