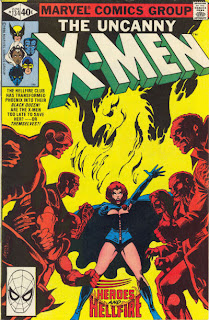 In a Nutshell
The X-Men escape the Hellfire Club, but Jean transforms into Dark Phoenix

Plot
The stunned X-Men watch as Cyclops struggles to his feet, his psychic death at the hands of Mastermind having almost killing his physical body as well. Just then, Wolverine bursts into the room, still fighting a handful of guards. Mastermind orders the Black Queen to attack him, and she telekinetically tosses Wolverine across the room while also secretly unlocking the ruby quartz helmet containing Cyclops' power. Cyclops quickly takes down Pierce and frees the other X-Men before blasting Leland out of the room and shooting the floor out from under Shaw. Colossus engages Pierce as Cyclops orders Storm and Nightcrawler after Shaw while Wolverine takes on Leland. Mastermind, seeing the day as lost, uses his power to hide in the background. Meanwhile, at Avengers Mansion, Beast receives an alert that the X-Men are attacking the Hellfire Club. Rather than call in the other Avengers and risk fighting his old teammates, Beast erases the alert and heads out to help the X-Men. 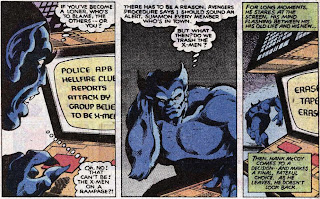 Back at the Hellfire Club, Colossus manages to destroy Pierce's cybernetic arm, but the villain manages to escape. Nightcrawler distracts Shaw while Storm creates a micro-blizzard around Shaw, freezing the fight out of him. Shaw breaks off the confrontation and rendezvous with Pierce, conceding the battle as lost but affirming that the war goes on. Upstairs, Cyclops is trying to herd guests out of the mansion, but Mastermind's illusions make everyone see him as an attacker. Just then, the rising storm water strikes the power conduit Wolverine exposed earlier in the evening, and the power goes out. As Cyclops orders a full retreat under the cover of darkness, Jean confronts Mastermind, explaining that the shock of seeing Cyclops die snapped her out of his control. Terrified of the darkness growing inside her which he unleashed, Jean puts Mastermind's mind in touch with the universe, and unable to cope with the sensation, he goes mad. She rejoins the other X-Men and the group leaves the club. Though she damps down her rapport with Cyclops, he can sense something is wrong with her and is determined to get her to Professor X as quickly as possible. The X-Men board their skyship. Jean senses Cyclops intentions, but knows it's too late for her. As the ship climbs into the air, Jean proclaims to the X-Men that she is no longer the woman they knew, once more anointing herself as Phoenix, and destroys the aircraft.

Firsts and Other Notables
This issue marks the first appearance of Dark Phoenix, as Jean is overcome by the darkness within her, released through Mastermind's machinations. Her words echo those of her initial transformation into Phoenix, when she emerged from Jamaica Bay in issue #101. 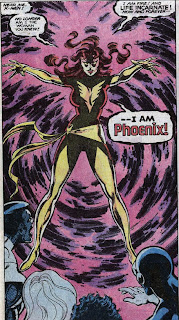 A Work in Progress
It is said that Avengers Mansion is four blocks up Fifth Avenue from the Hellfire Club mansion.

It is revealed that Mastermind was able to telepathically place his illusions in Jean's mind through the use of mind tap device created by White Queen. 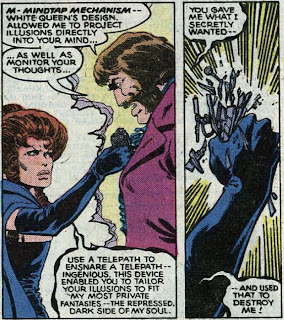 Wolverine manages to sneak up to an on-guard Cyclops in the dark, to Cyclops' amazement. It's also implied that he may have killed Leland (though we'll eventually learn Leland survived). 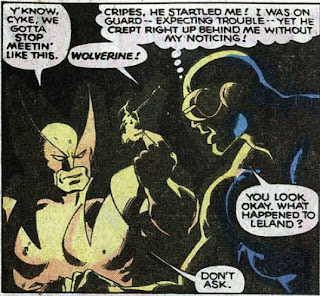 In a testament to the Wolverine's new-found respect for Cyclops, when he's ordered to retreat, Wolverine agrees without arguing, even though he'd rather stay and fight. 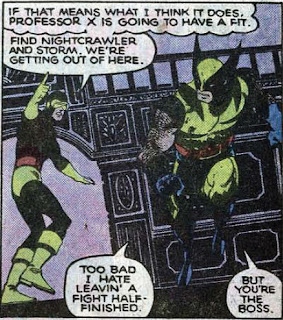 The X-Men took their skyship (the one stolen from Larry Trask's Sentinel base back in issue #60) from New Mexico to New York, and submerged it in the Central Park reservoir while they infiltrated the Hellfire Club. And continuing a running bit from earlier in Claremont's run (in which the X-Men's various vehicles tend to explode out from under them), the skyship is destroyed by Dark Phoenix in the last panel of the issue. 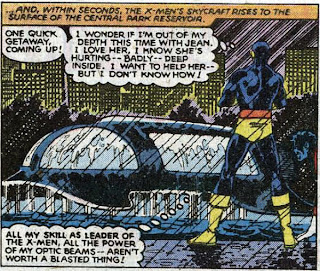 Claremontisms
Throughout this issue, narrative captions offer a glimpse into Jean Grey's thoughts as it becomes harder and harder for her to control her power and the darkness growing within her. Claremont uses musical terms to help describe the sensation, the infamous "power as song" metaphor:

“The obsidian flames burn brighter within her, and, in the distance, she hears music – a symphony of power long-sought and well-remembered."

“She reels under the impact of more sensations than she has names for ... as her song of power builds to its inevitable crescendo.”

It is a metaphor that reportedly irritated Byrne, though it's unclear if he objected to its use in this issue, or just in later instances (Claremont will re-use this particular metaphor again).

Here, at least, I rather like it, and think it works. As Jason Powell points out, Claremont's purple prose in these captions is at odds with the action being depicted. In most cases, the narration accompanies relatively mundane scenes: Cyclops running down a hall, the skyship taking off. The juxtaposition of baroque words against routine action helps build suspense within the issue, creating the sensation that something large and grand and probably terrible is about to burst forth. 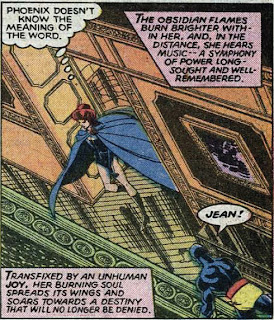 This issue features another instance of "defeat snatched from the jaws of victory", as the X-Men escape the Hellfire Club and free Jean from their control only to come face-to-face with an even more powerful and evil incarnation of their teammate. It's another penchant of Claremont's that bugged Byrne (the inability of the X-Men to never have a "clean" win).

Artistic Achievements
This issue has an excellent cover (and kicks off a string of classic, iconic covers) which is also an homage to the cover of issue #100.

There's a neat bit to open the issue which shows the X-Men as they are, as they should be, and how they appear to the entranced Jean. 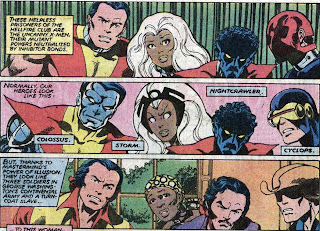 Byrne and Austin turn in a fantastic sequence of panels depicting Mastermind as Jean gives him the power he craved, making him one with the universe and, his mind unable to cope with the sensation, driving him mad.

The Awesome and Terrible Power of Cyclops
This is another great issue for Cyclops the tactician, as he goes from dead to orchestrating a successful counterattack within a few pages. Shaw even recognizes the talent of his foe.

Human/Mutant Relations
There's a great exchange between Colossus and Pierce as the two fight, which makes clear Pierce's anti-mutant prejudices (despite his working with mutants) and features a nice little speech from Colossus. 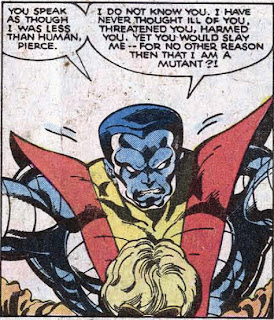 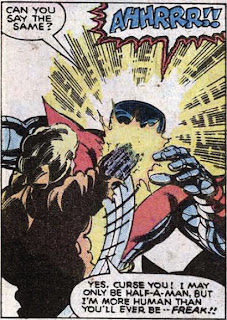 The notion of the X-Men as outlaws, distrusted by the general public (as opposed to the Avengers or the Fantastic Four) isn't something with which Claremont has dealt much so far in his run, but he starts to return to that notion in this issue, as Shaw declares his intentions to make the world see the X-Men as criminals. Though little comes directly from Shaw's threat, it's clear that the events of this issue have painted the X-Men in a negative public light, as they are seen as simply attacking a well-respected institution, for which the police and the Avengers are called out.

For Sale
I'll let you make your own jokes about this one... 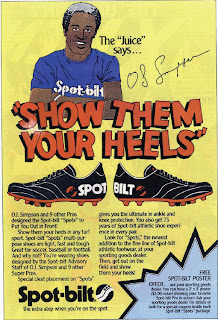 Teebore's Take
The second act of the "Dark Phoenix Saga" comes to a close, and this is the issue upon which the entire saga pivots. Though the X-Men have defeated the Hellfire Club and escaped, the victory is Pyrrhic, as the events of the last several issues have left them in an even worse position. Even for readers who don't know what's coming next, Claremont and Byrne do a masterful job of building suspense throughout the issue. From the moment Jean snaps out of Mastermind's control, she clearly knows something terrible has happened. Narrative captions throughout the issue let us into her thoughts: she is terrified of what is happening to her, and the fact that she can't stop it; she is filled with joy at the thought of exacting retribution on Mastermind, yet is saddened to feel that joy; she knows that Cyclops is trying to help her, yet at the same time, knows he is too late to do anything. It all builds to a terrific cliffhanger in which Jean, overcome by her dark side unleashed by Mastermind, echoes the words of her earlier transformation and becomes Dark Phoenix. The X-Men have overcome the Hellfire Club, but the truth is right there in the title: too late, the heroes.