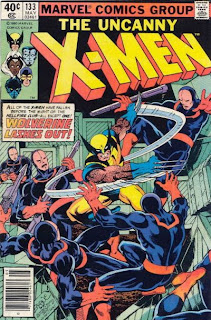 In a Nutshell
Wolverine takes on the Hellfire Club

Plot
A quartet of Hellfire Club mercenaries are searching the basement to confirm Wolverine's death when he suddenly emerges from the shadows and attacks them. Quickly dispatching three of the mercenaries, Wolverine intimidates the fourth into surrending before pressing him for information about the Hellfire Club. Upstairs, with the X-Men restrained by power dampening manacles, Shaw congratulates Wyngarde for his role in the Club's victory. Storm tries to reason with Phoenix, but thanks to Wyngarde's illusions, as Lady Jean Grey she only sees the X-Men in 18th century terms. She strikes Storm, whom she sees as a slave named Beauty. Cyclops, recalling the permanent psychic rapport Jean established with him back in New Mexico, wonders if he can use it to the X-Men's advantage, while Shaw explains that the Inner Circle intends to use the X-Men in experiments to create custom designed mutants.

Meanwhile, on Muir Island, Moira MacTaggert finishes analyzing test data on Phoenix and realizes that Jean had unconsciously created a series of psychic circuit breakers to limit her massive power, but that recently something has been releasing those breakers, allowing Phoenix to once more tap into near-infinite power. In New Mexico, Professor X tells Angel that he still can't reach the X-Men telepathically, and worries that his recent mistakes will lead to innocents suffering. Back in New York, Wolverine emerges from a dumbwaiter on the main floor of the club, but is captured by a guard, while Cyclops uses his rapport with Jean to enter her mind in attempt to free her from Wyngarde's control. Appearing as a Revolutionary War soldier, Jean sees him only as an American rebel, at which point Wyngarde emerges and engages in a duel with Cyclops. In the club, Wolverine casts off his attacker, but is swarmed by more guards, while on the Astral Plane, Cyclops is defeated by Wyngarde, who runs him through with his sword. Back on the physical plane, to the shock of the X-Men, Cyclops suddenly topples over dead.

Firsts and Other Notables
This is the first appearance of Cole, Macon and Reese, the three Hellfire Club mercenaries Wolverine attacks in this issue. They will eventually join the Reavers, a group of cyborgs with grudges against the X-Men, led by Donald Pierce (a fourth mercenary, Rosen, appears with the other three, but makes no additional appearances). 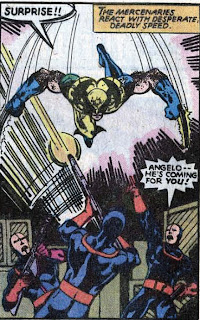 Senator Robert Kelly, a significant long-term adversary/supporting character for the X-Men, is mentioned for the first time; he in attending the Hellfire Club's party as a special guest of Shaw. 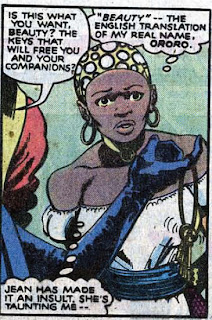 Angel's aeries is erroneously said to be in Arizona.

It is revealed that while on the butte last issue, Phoenix established a permanent psychic rapport with Cyclops, allowing them to share their thoughts with each other.

Cyclops notes that Mastermind only creates illusions, and shouldn't be able to take control the rapport he shares with Jean. 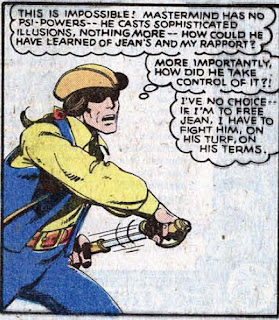 Throughout his duel with Mastermind, Cyclops is shown fighting with the sword in his right hand. In a close-up panel, however, he's holding it in his left, and Mastermind compliments Cyclops on the technique of switching hands to throw him off; it's been speculated that this line of dialogue was inserted by Claremont to cover for Cyclops' being drawn holding the sword in a different hand.

I Love the 80s
Because the Hellfire Club can't simply kill the captured X-Men outright, we get some business about the Inner Circle using them in experiments to create custom-designed mutants. It's clearly designed to be little more than an offhand explanation for why the X-Men aren't killed. 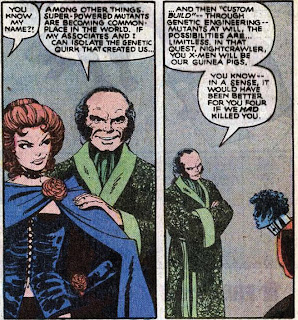 Claremontisms
It's not quite "the best there is at what I do", but it's getting close... 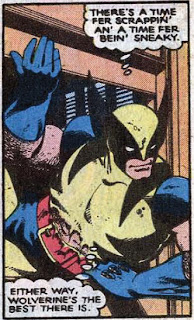 "Professor Xavier is a Jerk!"
Professor X mentions training Cyclops to replace him from the beginning, and admits he's resented Cyclops since returning from space despite that.

Young Love
A rather frisky Banshee puts the moves on Moira, but gets rebuffed. 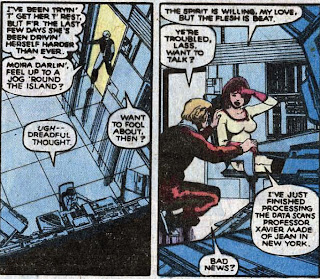 John Byrne on the appeal of Wolverine
"I don't like homicidal maniacs per se, it's just that I like the concept of a super-hero who's a homicidal maniac, a super-hero who will use his powers the way we all know we would if we had them. However much we lie to ourselves about truth, justice, and the American way, we all know we'd go out and kick ass and take names if we had them. Wolverine does that. And that appeals to me tremendously, that attitude of, 'Hey, I've got these powers and I'm going to use them, sucker.'"

John Byrne on the morality of Wolverine's actions
"Wolverine, as I've always drawn him, has never killed except in self-defense. I think a lot of people just don't like the idea of a super-hero killing. There's a lot of people who say, 'Well, this is going to function as a role model. We don't want our kids doing this.' To me that's absurd because your kids can't do that. They don't have adamantium claws...But the important element of any super-hero to me is the unreality, that you can't do what a super-hero does, so no mattter what thge super-hero does, you can't do it. So it isn't a role model except on a purely moral level, and that's why, as I say, although it's totally homicidal and he has no control over that, I was very careful that Wolverine never killed - except for that guard in the Savage Land [#116], for which you could come up with extenusating circumstances about it being self-defense - but he never killed unless the other person tried to kill him first."

Teebore's Take
Without a doubt, this is the single most iconic Wolverine issue yet, and the one most responsible for cementing him as the fan favorite, breakout character of the book. Having received a number of cool moments since issue #109 (including his silent take down of a guard in issue #114 and his off panel escape from Alpha Flight in issue #121), this issue features the extensive of those moments, as Wolverine takes on a trio of Hellfire Club mercenaries and mounts a rescue operation all by himself. Thrusting Wolverine into the spotlight for the first time, it put the character onto the path towards becoming not only the most popular X-Men character, but arguably, the most popular character at Marvel.

Also, this issue sees the X-Men at arguable their lowest point ever, completely at the mercy of the Hellfire Club, betrayed by one of their original members with another lying dead. While it lacks the thematic and symbolic depth of last issue, that's still not too shabby for the middle chapter of a story.

Next Issue
Is Cyclops dead? Will Wolverine save the day? Is this the end of the X-Men?
Newer Post Older Post Home
Posted by Austin Gorton at 8:00 AM