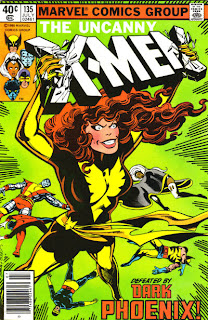 In a Nutshell
Dark Phoenix goes on a rampage.

Plot
In the wake of their skyship's destruction, the X-Men plummet to Earth, with Colossus and Nightcrawler using their powers to land safely while Storm grabs Wolverine and Cyclops. But Dark Phoenix attacks again, making quick work of the team. Nearby, Sebastian Shaw meets with Senator Kelly in the wake of the X-Men's "attack" on the Hellfire Club. As the NYPD insists on calling in the Avengers or the Fantastic Four to search Central Park for the X-Men, Shaw proposes to the senator a more long term solution for the mutant menace: Sentinels. Just then, they watch as an enormous fiery bird appears over Central Park as Dark Phoenix heads into space. Following her departure, Beast arrives and helps evacuate the X-Men from the park. In New Mexico, Professor X confers with Moira over Dark Phoenix's increasing, cosmic-level power. Considering himself party to blame, Professor X tells Angel he must get to New York as quickly as possible to try and rectify his mistakes.

In outer space, Dark Phoenix slingshots around the sun and opens a star-gate, emerging in a far off galaxy. She plunges into the heart of a star and consumes its energy. The star goes nova, obliterating a nearby planet and wiping out its inhabitants. A nearby Shi'ar battle cruiser detects the explosion and investigates. The ship engages Dark Phoenix, but she overpowers it with ease. Before he dies, the captain of the ship manages to send a message to Shi'ar empress Lilandra, who recognizes Phoenix and realizes that what the Shi'ar have feared has come to pass. Back on Earth, the X-Men and Beast have returned to the mansion and are discussing what, if anything, they can do to stop Dark Phoenix when Cyclops suddenly sits bolt upright. He can sense Phoenix through the psychic rapport they share. She's returning to Earth, and she's hungry!

Firsts and Other Notables
Dark Phoenix destroys the planet D'Bari this issue, killing its approximately 5 billion inhabitants, virtually wiping out the species. Though the D'Bari (commonly referred to as "the Asparagus people" by fans and creators) only received their name in this issue, one of their race made a previous appearance in Avengers #4 (the issue which marked Captain America's Silver Age return). 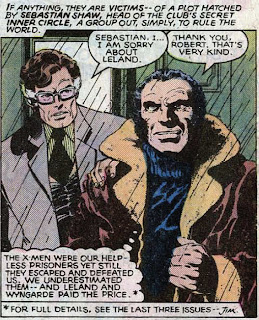 As Dark Phoenix leaves Earth, her power surge is detected by a wide variety of Marvel heroes, including a certain doctor around whom strange things seem to happen.

The backup story in the Classic X-Men reprint of this issue, written by Claremont, takes place during Cyclops' childhood at the orphanage where he grew up. Published shortly after the end of Marvel's line-wide, X-Men-centric "Inferno" crossover in 1989, it hints at Claremont's intended origin for the villain of that story, Mr. Sinister, with Sinister being the evil manifestation of Nate, a boy at the orphanage who is fixated on Cyclops. Though Claremont will leave X-Men before fully revealing his plans for Mr. Sinister, the direction future writers take the character still fits with what Claremont hints at in this story.

A Work in Progress
Nightcrawler bemoans the X-Men's tendency to get blown out of their vehicles. 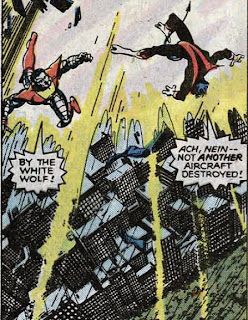 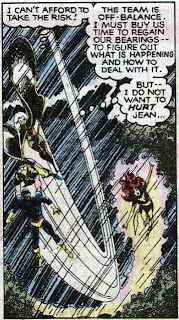 It's once again implied that Leland was killed last issue, but nothing in the exchange is directly contradicted by his later appearances (he's seen being wheeled into an ambulance, but it's not clear whether he's alive or dead). 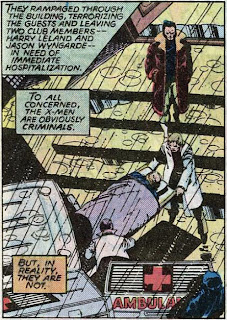 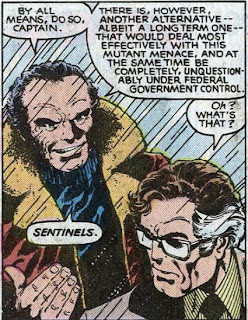 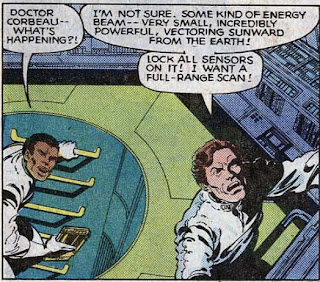 The X-Men return to the mansion this issue, and in the ensuing conflict with Dark Phoenix, the Hellfire Club's tap on Cerebro gets lost in the shuffle; presumably, it's still in place, but as far as I know, it is never mentioned again.

Claremontisms
Claremont continues to make an effort to characterize even one-off characters; here, he establishes that the captain of the ship which engages Dark Phoenix is a protege of Lilandra (who, before leading a rebellion against her brother and becoming Empress, was the head of the imperial fleet).

Not surprisingly, it's an exclamation-heavy issue, with a "By the White Wolf," "Lenin's Ghost", and the Shi'ars' go-to "Sharra and K'ythri preserve us!" getting dropped in the course of the action.

Artistic Achievements
Another great cover, this one an homage to X-Men #56 (creating another link between Claremont/Byrne and Thomas/Adams).

Byrne and Austin use their knack for parallel panel construction to depict the destruction of the D'bari's planet. 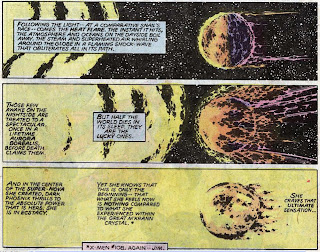 Young Love
The comparisons between Jean's increasing power and her sexuality continues, as Cyclops notes that she's basically getting off on using her power. 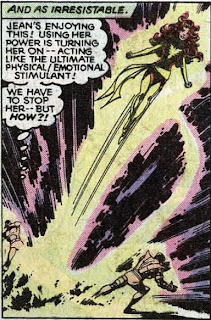 Human/Mutant Relations
This issue continues to cement the X-Men as outlaw heroes, reinforcing the idea that as far as the general public is concerned (thanks in part to Shaw's machinations) the X-Men just attacked a prestigious club for no good reason.

One of the cops sent to investigate the disturbance at the Hellfire Club makes it clear he won't order his men into action against the X-Men, and casually tosses around the word "mutie" in reference to them. 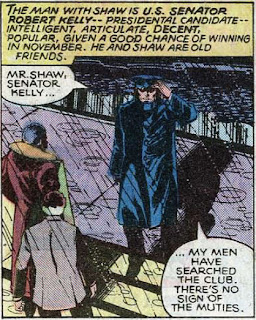 It's in the Mail
There's an interesting letter in this issue which tries to take Claremont to task for bringing back Professor X in issue #129. The writer believes Professor X to be dead, as of issue #42. It's a neat glimpse into a different time, before the internet and trade paperback collections, when the author of the letter had likely read (or heard) about the death of Professor X back in the Silver Age, then missed any references to his return and continued survival before seeing the character pop back up again in #129. 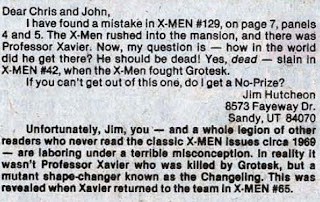 Chris Claremont on Phoenix destroying D'Bari
"There was no awareness of right and wrong. She was beyond that, It was...when she consumed D'Bari, it was the equivalent of a human being destroying an ant hill. 'We're sorry we have to kill you, ants, but we're hungry, we've got to eat something, we've got to plow this for a freeway.' On an evolutionary scale, they were not sentinet beings to her. The same goes for the starship. And, again, in her defense, they shot first."

Claremont on the editorial response to this issue
"We had a situation in which John and I knew we were both treading on thin ice with the storyline. We were stretching things as far as we thought we could go in terms of what we could persuade Marvel to accept. And we both felt this was a storyline that had to be cleared at every step of the way. Well, Roger [Stern] at that point had gone off staff in the middle of the storyline. Jim Salicrup had come in and taken over, so here I am giving plots to Salicrup, saying, 'If there's any question, ask me; if there's any problem, would you please show these to Jim [Shooter] and check with him. We are dealing with some heavy concepts here. Jean is killing an entire planet.' And Jim never showed them to Shooter. Shooter told Jim he trusted his judgment. Well, as it turns out, Salicrup approved everything...[but Shooter] popped a cork. And that was exactly what we were afraid of all along."

John Byrne on making Phoenix a villain
"[Claremont] kept making Jean more and more powerful. Even when I took pains not to draw it that way, we'd get the whole 'her power is a song within her' stuff. The X-Men were fast becoming fifth wheels in their own book...[writer Steven Grant] suggested that we just make [Phoenix] a villain. I wasn't at all crazy about the idea - Jean was a favorite - but it seemed very much a case of the good of the many outweighing the few: If the X-Men were ever to get their own book back, Jean could not continue in her present form...all the 'bits' that Chris came up with for the first rampage of Dark Phoenix amounted to pretty harmless stuff or acts of self-defense - so I had her nuke the Asparagus People, and everything snowballed from there."

Teebore's Take
Claremont and Byrne open the final act of the "Dark Phoenix Saga" with an issue designed to establish just how powerful Phoenix has become. First, she takes out the X-Men with essentially, a wave of her hand, then she departs the planet, her surge of power drawing the attention of other Marvel heroes from the street-level Spider-Man to the cosmic Silver Surfer. She travels vast interstellar distances, then eats a star and kills a planet before casually destroying a Shi'ar starship and heading back to Earth. Also, the transition into space, and the encounter with the Shi'ar (along with several references to the events of issue #108) are meant to remind us that "Dark Phoenix" is the endgame of the story Claremont began in earnest back in issue #101. Saving the universe in issue #108 was not without consequences. Jean, more powerful than ever, is craving the rush of sensations she experienced inside the M'Kraan crystal. Freed from her inhibitions by Mastermind, corrupted by the extreme power at her disposal, she will do anything to recreate that sensation. Thus, the grand irony at the heart of this four years-long story is that in saving the universe, Phoenix started down a path that has led her to become as great a threat as the one she stopped.

Next Issue
The X-Men vs. Dark Phoenix: Round 2
Newer Post Older Post Home
Posted by Austin Gorton at 8:00 AM