Well, real life intruded on TV much earlier in the season than I was expecting, which is why lots of stuff is missing this week (no Glee, Person of Interest, or Terra Nova yet; next week, hopefully). Anyways, here's what I got.

The Simpsons: Bart Stops to Smell the Roosevelts
Maybe it's just because I'm a history nerd, but I really liked this episode (Teddy Roosevelt is a pretty cool historical figure). Surprisingly, given the longevity of the show at this point, they've never really done a Superintendent Chalmers episode, and even more surprisingly, it was a relatively down-to-earth story, with Chalmers' old fashioned, boys-will-be-boys, rugged hands on approach reaching the more troublesome kids. Well, down-to-earth until Bart and the bullies overtook the school and held it hostage, but that was more a result of the random last act bizarreness from which the show seems unable to escape since the switch to the four act structure. Still, this late in the game, it's nice to see that The Simpsons is still capable of churning out a solid, thoroughly enjoyable episode now and then.

Other Notes
Teddy Roosevelt received a guest star credit for this episode (because of the audio clip to which Bart was listening, I believe), which is pretty cool.

I also loved Bart and Lisa's argument over which Roosevelt was better, and Lisa's assertion that she already went through her Teddy Roosevelt phase (again, history nerd here).

Homer: They always come up with such catchy ways to make us pay for things we don’t need for kids we didn’t want.

Dolph: The dude really knew how to rock some jodhpurs.

Jimbo: School failed me?  Does school have to go to summer Jimbo? 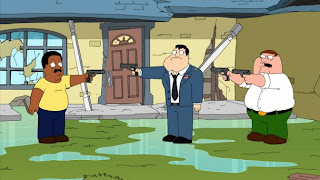 This is the pseudo crossover amongst the Seth MacFarlane comedies that was supposed to air last spring, the same weekend that a shit ton of tornadoes ravaged the south, so Fox pulled the episodes for a later airing. Which was apparently now. Surprisingly, there was very little actual crossover amongst the three shows (other than the hurricane itself or the very end of American Dad). Which is probably for the best, as each show can, in its own way, be wildly different from the other. Still, I kinda thought maybe we'd see a character blow through the background of each episode or something like that.

Even more surprisingly, with the exception of American Dad, each show largely ignored the hurricane beyond using it as an excuse to do an otherwise self-contained bottle show. Of the three, American Dad was, not surprisingly, the funniest (best moment: the sad head shake the bear gives Stan after he harpoons Francine). Cleveland Show tried to be uncharacteristically deep, and for the most part, it worked, largely because the focus was on Cleveland Jr., the show's strongest character (I loved his cool detachment in the face of the hurricane and his family's attempt to force their faith on him, and that he saved Cleveland using basic engineering skills; the whole time everyone was freaking out about Cleveland being trapped, I was thinking, "don't they have a saw or something in the garage?").

Family Guy was light on laughs, as their bottle shows tend to be (I did love the "GI Jose" cutaway though; "now you know enough!"), but it was nice to see Meg lash out and for the show to try and develop an in-continuity explanation for why Meg gets treated like shit (I don't know that it necessarily works, but I appreciate the effort). Though I did wonder, when the TV went out, why Peter didn't just entertain his family with another Star Wars tale. Also, Brian's 'shrooms-induced freak out, while totally tangentially to everything else, was enough to keep me from ever doing drugs.

Stan: Maybe a massage will calm you down. Just start up here.

Stan: See what a good wife Jeff is, Francine?

Steve: Now it's hungry for blood AND knowledge! 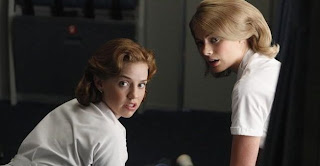 This was probably the best pilot I've seen this year (though I haven't watched Terra Nova yet, and that has dinosaurs) but I don't have a ton to say about it. It's a promising show, and having never watched Mad Men, I'm not burned out on the whole "60s as a reflection of today" schtick. I've read enough to accept that the show is doing its best to be historically accurate (the set is a painstaking recreation of the actual Pan Am clipper from 1963, the creator actually was a Pan Am stewardess in the 60s) so I'm willing to sit back and enjoy the ride. Whether the show has enough narrative thrust to keep things interesting, we'll find out, but for now, I'm on board.


How I Met Your Mother: The Ducky Tie 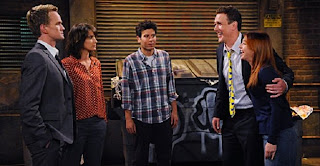 This felt very much like a classic How I Met Your Mother episode, with a sappy Ted A-story and a more humorous B story involving the rest of the gang, centered around Barney's antics. I have to say, that while I totally thought Barney was pulling a long con and his intention all along was to get into the alley for a peek at Lily's boobs, I did not see the second twist, that it was a long con AND he actually could do all the tepenyaki stuff, coming.


Other Notes
They circled back around to the ducky tie surprisingly fast, didn't they?

The highlight of the Barney story was either the editing after he had to avoid looking at Lily's boobs for ten seconds, or Marshall's frantic attempts to keep Ted from seeing what Barney was seeing.

I'm enough of a word nerd to have enjoyed the "Klaus/class/close" bit.

Victoria's return didn't disappoint, as her and Ted remained very fun to watch together.

I'm not a huge fan of "exes can't be friends" storylines in any medium, but it's even more concerning here, as we know SagetTed has referred to Robin and Barney as aunt and uncle to his kids, so we know at that point at least, they're still enough a part of Ted's life to be close to his kids, so it kinda feels like a wheel-spinning exercise (and we already had the Ted-Robin-Barney blowout a few seasons ago). That said, I can't really criticize a storyline that hasn't happened yet, so we'll see where it's going before passing judgment.

Ted: You make it sound like I dated a series of Stieg Larsson novels.

Ted: Do you believe in fate?
Victoria: I believe you're about to give a big speech on fate.


2 Broke Girls: And the Break-up Scene
A definite step down after the first episode, with too much of this episode written like the much broader first half of the pilot. The finale of the pilot seemed to suggest a new understanding between Max and Caroline, but we basically saw them go through the same journey again this episode. I once read somewhere (I forget where) that it's an industry convention that the first six episodes of any new show have to function as mini pilots in and of themselves, repeating the setup of the show and the characters' relationships for any new viewers tuning in late (the idea being that after six episodes, a show as found whatever audience its going to find, and can expand from there) and to remind returning viewers of the premise (because networks think we're too dumb to remember it week to week). There's enough appeal to the relationship between the main characters here (when they aren't rerunning the same arguments...) to keep me around, but man, these next four episodes are going to be tough to get through if they're as derivative of the pilot as this one.

Also, keeping a horse in the backyard stretches even my ability to suspend my disbelief, despite the interactions with the horse being some of the best parts of this episode. 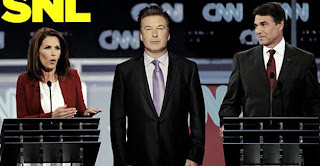 Kind of a lackluster premiere, despite the presence of Baldwin, a solid SNL host. The show was very front loaded, with the best material coming from the cold open, the monologue, and the post-monologue commercial. After that, everything was pretty meh, "Weekend Update" excepted (which featured Baldwin's Tony Bennet in a bit that was funny but a bit long).

The Top Gun casting sessions had some moments, but I always enjoy impressions for impressions sake (and am happy for any excuse to see Hader's Alan Alda). There were a few good lines in the "Who's on Top?" sketch ( Timon and Pumba: Even. “It’s a circle of life.”) and the last "tell my wife I love her" sketch ("Tell my son that a cripple isn’t a full human being."), but no real breakout sketch or anything that was funny top to bottom.

Favorite Sketch: Honestly, it was probably the cold open.
Episodes Featuring a Game Show: 1/1
Episodes with a Monologue Featuring a Song: 0/1 (hooray!)

Steve Martin: I was just passing by the studio in full makeup.
Newer Post Older Post Home
Posted by Austin Gorton at 8:00 AM