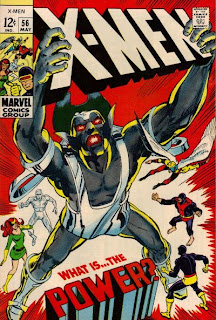 In a nutshell
The Pharaoh transforms into the Living Monolith and battles the X-Men.

Plot
The X-Men, with a captive Living Pharaoh in tow, spot an archaeological dig and land, hoping to find local authorities to whom they can turn over the Pharaoh. Instead, they are attacked by the Pharaoh's cultists, and the Pharaoh is released, escaping with Alex. Angel follows the Pharaoh and his men back to their temple base, telepathically alerting Marvel Girl to his whereabouts. At the base, the Pharaoh explains that he and Alex both draw their power from cosmic rays, but that the more Alex uses his power the weaker the Pharaoh becomes. He locks Alex instead a sarcophagus designed to stop him from absorbing cosmic rays and kill him.

The X-Men arrive just as the Pharaoh, transformed into the gigantic Living Monolith, erupts out of the temple. The X-Men engage him in battle, but are over-matched. Back inside, Alex manages to free himself from the sarcophagus, and begins sapping the Monolith's energy once more. Weakened, the X-Men are able to overpower the villain just as the temple is destroyed. Alex emerges from the wreckage, bristling with uncontrollable energy.

2nd Story: "The Flying A-Bomb!"
Angel attacks Iceman and Cyclops. After Angel knocks Iceman out, Professor X manages to telepathically calm Angel down and explain that the vial of gas he retrieved is an experimental nuclear explosive that will soon detonate unless it can be frozen. With Iceman knocked out, Angel is forced to fly the vial into the upper atmosphere, where it freezes and is destroyed safely. Almost passing out from the cold and thin air, Angel is telepathically kept awake by Professor X and manages to land safely, whereupon he joins the X-Men. 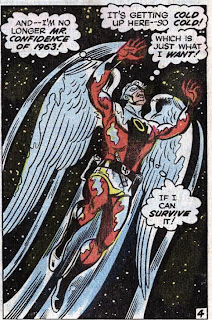 Firsts and Other Notables
Groundbreaking artist Neal Adams debuts as the new regular artist, a position he will maintain (barring a few fill-ins) until the book goes on hiatus with issue #66.

The Living Monolith (the super charged form of the Living Pharaoh) appears for the first time. 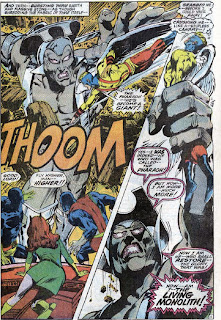 The Pharaoh reveals that he and Alex draw their power from the same source (cosmic rays) and that cutting Alex off from that power increases the Pharaoh's. A later story, in Uncanny X-Men #376, attempts to rationalize this bit of random Silver Age plotting by revealing that Mr. Sinister grafted some of Alex's DNA onto the Pharaoh years ago, which accounts for the symbiotic relationship of their powers. 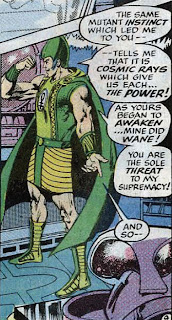 The cover (which, in years to come, will be heavily homaged) depicts a character interacting with the book's logo for the first time.

Angel joins the team in the backup.

The "Origins of the X-Men" backup feature concludes with this issue, though Marvel Girl will get a backup detailing her powers next issue.

A Work in Progress
In the backup, Professor X determines that the gas Angel accidentally inhaled last issue temporarily affected his ego and accounts for his belligerence, though Cyclops and Iceman aren't quite so sure. 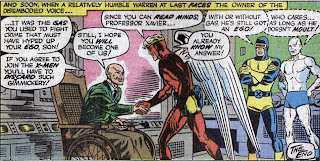 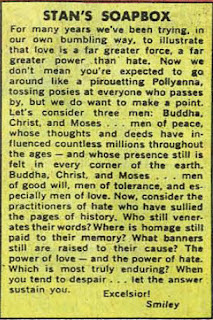 Neal Adams on being assigned to X-Men
"[Stan Lee] just said, "What do you want to do?" I said, "Well, what's your worst-selling title?" and he says, "X-Men. We're going to cancel in two issues." "Right," I said, "I'd like to do X-Men." When Stan asks me why, I say, "Because if you're going to cancel it in two issues, you're probably not going to pay much attention to it and I can pretty much do what I want." "Fine," he says, "you do X-Men, but after we cancel it, you have to an important book like Avengers."

On abandoning the traditional Kirby grid
"When you're drawing a syndicated comic strip, you have to follow a strict format. It's very disciplined work. With comic books, you get to use the entire page and I just went crazy. I'm a designer. I've done all this advertising stuff and all this other work in different areas, and now, suddenly, I've got a full page and I can do anything I want as long it makes sense and tells the story."

On page design
"If you read one of my X-men stories, you're stopped all the time and sometimes you have to back up. By the time you're done, you feel as though you've read thirty-five pages. that's because of the way I designed those pages. The way the balloons are structured in X-Men #56, you read them and then you have to go back and look at what was talked about. Your eye is forced to go back...With X-Men stories, you've got five or six characters, villains and other things going on. You have to take the time to reread a little bit and study the pictures. The story has to be designed in such a way that you'll get all the pieces."

Teebore's Take
The impact of Neal Adams' presence can't be overstated. It could be argued that the X-Men wouldn't exist today if not for four men; Neal Adams is one of them. X-Men, at this point never one of Marvel's big sellers, was limping towards cancellation. While the work Adams does alongside Roy Thomas, beginning here, won't save the title from ceasing to publish original stories in ten-issues time, it is credited with increasing sales enough to keep Marvel from canceling it outright. More importantly, the Thomas/Adams run will help make a cult hit out of its final days as they craft original riffs on classic X-Men tropes that will inspire later creators. Like the original Star Trek, this run, while lacking commercial success, will cultivate a small-but-devoted fan base, one that will help keep the characters alive until the next generation debuts.

Adams' work is both groundbreaking and trendsetting. It's not just that he does things few artists at the time are doing, but that what he does becomes the industry standard. Compared to the house styles of the time, his art (like Steranko's before him, and similarly incorporating influences from the world of commercial illustration) is far more detailed and realistic with unique and innovative panel layouts. Figures within panels are larger, backgrounds are more nuanced. Even the characters on the cover are breaking the fourth wall and interacting with the logo.

While it's easy to see how his art is different from what came before, it's hard to appreciate how innovative it is, because so much of modern comic book art is built on the work of Neal Adams. But what he's doing at this point in his career, like using the whole page simply because he can or thinking about how the layout of the page contributes to the story, will have such an impact both on fellow artists and sales of comics that future artists will incorporate his innovations into their own work while the comic book companies are happy to let them. These are things most every artist nowadays does and thinks about. It's not that Neal Adams did them first, it's that after he did them, everyone else started doing them too.
Newer Post Older Post Home
Posted by Austin Gorton at 8:00 AM