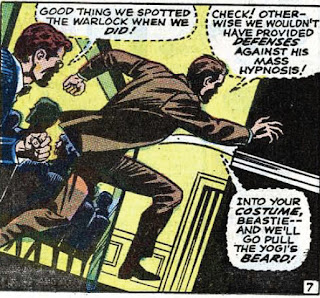 Slipping out of the crowd, the two X-Men attack Maha Yogi, who fights them off with complex illusions. Ultimately, they come to their senses, and Maha Yogi accidentally blasts the stage light control box while targeting Iceman. The dazzling lights disorient the mentally-unbalanced Maha Yogi, and Beast, after wrapping him in a stage curtain, bombards him with noise from one of the speakers, bringing him even closer to madness and forcing him to surrender.

2nd Story: "I, the Iceman
Iceman's powers and abilities are explained. 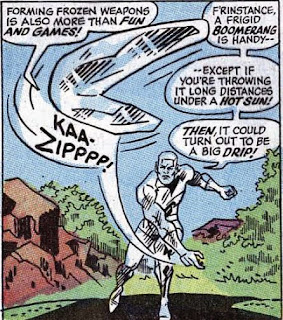 Firsts and Other Notables
After a scant few issues, Gary Friedrich is already on his way out. This is his last issue as writer. Arnold Drake, who co-scripts this issue with him, will take over next issue.

Warlock, who first appeared in issue #30, returns as Maha Yogi, using his act as a Eastern spiritualist to hypnotize his audiences into becoming his servants. He has no immediate plans for them, though; apparently he just figures it never hurts to have a hypnotized army standing by. No explanation is given for how he went from "using Camelot-themed goons to conquer the world" to "use an evil theater act to create an army of slaves".

The backup story establishes that Iceman draws on the ambient moisture around him to create ice.

Beast comments on the relative stupidity of Agent Duncan's whole "it's safer for the X-Men to split up" theory and worries that it will take the death of an X-Man to prove him wrong.

Ah, the Silver Age
Warlock's act as the Maha Yogi is a nod to the increasing popularity of Eastern spiritualism/mysticism in the United States at the time. Or, as Bobby says, he's a "real Oriental Ozone -- a gas, lass!"

More fun at the Cafe-A-Go-Go, at least until Beast's comments about the poetry set off a fight with some angry beatniks. 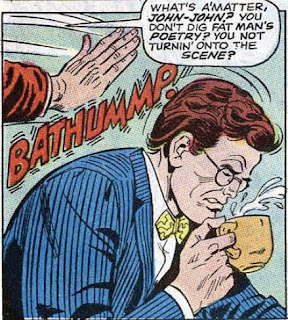 It's the Mighty Marvel Age of Tongue-in-Cheek! 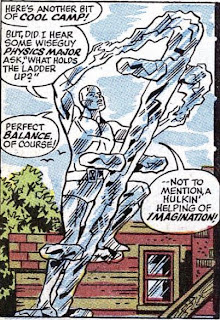 Young Love
Hank and Bobby once again give their dates the bum rush, secretly running off to face Maha Yogi and later coming up empty pocketed.

For Sale
Pete Duncan - "Dropout". Don't you wish you'd taken Business Math? (click to embiggen; it's worth it) 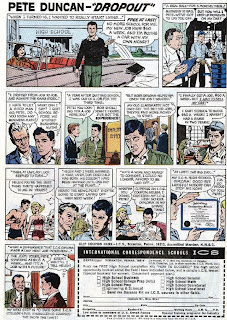 Warlock was a pointless villain the first time around, and he's no better the second time around, even dressed up in a then-current fad. His defeat at the hands of theatrical equipment is downright laughable. Even worse, the entire plot of Beast and Iceman going into the city, taking on a villain and unintentionally ignoring their girlfriends is the kind of story that could have taken place at any point in the book's history. It doesn't require the X-Men being disbanded to work. After all the effort (and dubious reasoning) that went into splitting up the team, it's a shame this story, the first to follow in the wake of that new status quo, fails to utilize it.
Newer Post Older Post Home
Posted by Austin Gorton at 5:00 PM